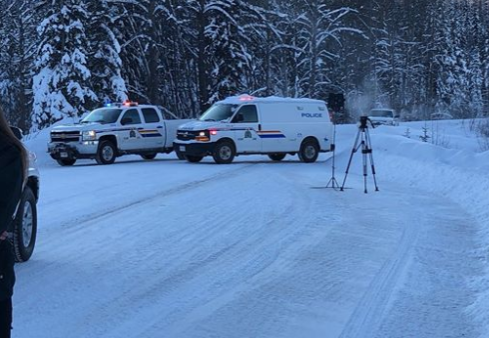 Canadian police established an exclusion zone and are restricting access to Indigenous land in B.C. where Wet'suwet'en Hereditary Chiefs are leading the protection of the land and halting construction of the Coastal GasLink pipeline.
Mainstream media and tribal members bringing in essential supplies were turned back at the roadblock on Monday, with temperatures at camp minus 35 degrees. The RCMP denied media and tribal members are being blocked in a public statement, but the facts were documented by those present.


Wet'suwet'en stopped at the roadblock by RCMP spoke out.
"As a Wetsuweten member, we were denied access to bring food and supplies out to the Gitdumden Territory. Last year I brought out socks and gloves and supplies as I always do but this time I was denied access to Wet'suwet'en Territory.
"In the RCMP press release they stated that anyone will be given access that is bringing out food and supplies."
"I went out today and was denied. So honestly what is the truth? I don’t understand I'm concerned for the people on the territory in this cold and wanted to bring out items. They could be freezing out there in the freezing weather?" said one of those who was blocked.
"I’m Wet'suwet'en why was I denied? There’s a huge difference between what is being told to media and what they are allowing?"
"They said it’s for everyone’s safety -- why this exclusion zone was created. Ok for my protection? Why so many RCMP officers? Safety on our territory? The only trespassers and threat I see on there are the RCMP honestly -- am I a threat? I only wanted to bring out food and clothing. I have a heart of gold, care for all walks of life. I uplift my fellow neighbor. It’s just who I am, honestly, I care too much. Love conquers all evils -- I guess not in this case denied at the front door. This is disheartening it really is. Why are they denying our Wet'suwet'en people on their own territory, their own land? I wanted to see for myself if the accusations of being denied were true and yes, they are true. Don’t believe anything until you see for yourself -- that I did."
At the same time, Wet'suwet'en Hereditary Chiefs are calling for United Nations intervention.
Native people are on high alert and concerned for the safety of the Wet'suwet'en due the fact that the RCMP planned to shoot to kill Wet'suwet'en at a blockade last year. The facts were recently exposed by The Guardian.

In an urgent update issued today, the Unist'ot'en Camp said, "Wet'suwet'en lands are unceded, untreatied, and unsurrendered. We maintain full jurisdiction, and the right to decide what happens on our lands. Our chiefs have unanimously asked RCMP to pack up and leave their remote detachment, but instead, RCMP are increasing their presence - in anticipation of using violence against our people to force their way onto our lands."
The Unist'ot'en Camp said on Monday, "RCMP have set up an 'exclusion zone' at 27km and are blocking media, Wet'suwet'en people, and food from getting up to our territory.
"This is a violation of our human rights, Wet'suwet'en law, and our constitutionally protected rights as Indigenous people.
"Last time RCMP set up an 'exclusion zone,' they had authorized lethal force against unarmed people.
"RCMP have issued a press statement they will allow certain people in and out of the territory, provided they are willing to be identified, served an injunction, and detained on the way out: http://houston.bc.rcmp-grc.gc.ca/ViewPage.actio
"From what we've heard, RCMP are not honoring these terms on the ground. RCMP at 27KM told a group of Wet'suwet'en that ONLY elected and hereditary chiefs, not our members, will be allowed up.
"Mainstream media reporters were denied access earlier today. Supporters with essential supplies were turned away just hours ago.
"Anyone who gains access will have to be approved by commanders, including our hereditary chiefs.
"It is not up to the RCMP to determine who is and is not a hereditary chief, and it is not up to the RCMP to determine who we invite on our territory. We reject this criminalization of Wet'suwet'en authority.
"All eyes on #unistoten / #wetsuweten! The time is now!"

SMITHERS, BC – Jan 13, 2020: Wet’suwet’en Hereditary Chiefs have submitted a formal request to the United Nations to monitor RCMP, government and Coastal GasLink (CGL) actions on our traditional, unceded territory. This request follows the recent directive from the UN Committee on Racial Discrimination (CERD) requiring Canada to halt the CGL pipeline project and withdraw RCMP from our territory in order to avoid further violations of Wet’suwet’en, constitutional, and international law.
This weekend, the Wet’suwet’en Hereditary Chiefs invoked special communication procedures of the UN Office of the Commissioner of Human Rights. These procedures will allow joint input from UN experts specializing in the human rights protection of Indigenous peoples, human rights defenders, the environment, and those facing forced eviction. These UN human rights experts are independent authorities who monitor compliance with international human rights obligations, including rapporteurs on housing, environment, human rights, Indigenous peoples, and racism.
Neither the provincial or federal governments have agreed to meet with the Wet’suwet’en Hereditary Chiefs to address this crisis, despite serious ongoing human rights violations, protests across Canada and international attention.
Ignoring BC’s commitment to ratify UNDRIP into law, and specifically, our right to obtain free, prior, informed consent for industrial projects through our unceded lands, John Horgan has signaled that he supports the continued construction of Coastal Gaslink. The Wet’suwet’en Hereditary Chiefs are gravely concerned that Horgan will respond to our grievances with militarized police instead of diplomacy.
Professor Margot Young, a constitutional law expert at UBC’s Allard School of Law, states: “International law is absolutely central to the resolution of this situation. All levels of government are bound by treaties signed by Canada, and Canadian constitutional law is to be informed by these human rights obligations. United Nations' concerns are not to be lightly cast aside.”
RCMP have increased equipment and personnel presence in the area, conducting fly-overs, drone surveillance, and foot patrols. They have restricted helicopter access to the area and established an “exclusion zone”, blocking roads into Wet’suwet’en villages and denying entry to Wet’suwet’en people. Police are demanding identification, controlling access, and plan to detain all individuals who leave our territory. Several reporters have been denied access to the area, while supply lines for food, medical supplies, and crucial winter gear are threatened.
The Wet’suwet’en Hereditary Chiefs are title holders and govern access to our traditional lands. By trespassing on Wet’suwet’en traditional lands, CGL has infringed on Canadian and international law and has compromised sites central to the spiritual and cultural well-being of Wet’suwet’en people.
The Chiefs’ weekend submission to the UN highlights the imminent threat posed by the RCMP and security forces currently surrounding Wet’suwet’en villages and lands. The Wet’suwet’en Hereditary Chiefs urge Canada to comply with UN directives that Canada withdraw RCMP, halt Coastal Gaslink, and seek free, prior, and informed consent for any development occurring on our lands.