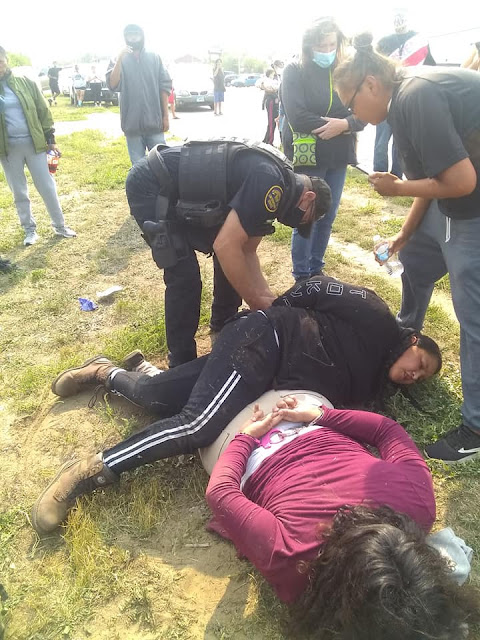 Photo by Andy HighBear
Lakotas arrested at KXL pipeline protest on Friday: Zeibach Sheriff intrudes, tribal police use excessive force, on Cheyenne River Lakota Nation
"It became clear the police were more than happy to hurt our people when they targeted one of our white allies. Cheyenne River Sioux Tribal police instigated, by pulling out tasers and using excessive force. They pushed down an elder who was merely standing by and asking the police to stop." -- Joseph White Eyes.
Article by Brenda Norrell
Photos by Andy HighBear
Censored News
EAGLE BUTTE, South Dakota -- Lakotas were arrested at a KXL pipeline protest on the Cheyenne River Lakota Nation on Friday by the local police and county sheriff's deputies using excessive force during the peaceful and prayerful gathering. The Zeibach County Sheriff intruded on the sovereign land of the Cheyenne River Lakota Nation.
Lakota Water Protectors rallied to bring awareness to a recent secret meeting held by TransCanada Energy and seven Cheyenne River Council representatives without Oyates' consent. Five people were roughly arrested at the prayerful and peaceful protest, including Lakota women.

Joye Braun, Cheyenne River Lakota, said, "Ziebach County Sheriff showed up on their own. They are not cross deputized they had no legal right to intervene on our Cheyenne River Sioux Tribal members much less make threats, mock people and escalate a situation."
TaSina Sapa Win said, Cheyenne River Lakota, was among those arrested. "Norman Schuler (a city cop, not tribal), roughed my wrist up pretty good while out of his jurisdiction."
Joseph White Eyes, Cheyenne River Lakota, was also arrested. White Eyes said it was a prayerful and peaceful gathering, but police used excessive force.
"I personally would like to say, 'Thank you!' to all who joined us today. It started in a prayer said by a well-respected woman of our tribe Joye Braun, ending with an Inipi for our relatives arrested today, to call back our spirits."
"Our Fight and plea were not with the Cheyenne River Sioux Tribal Police. We were peaceful, and have been from the get-go. The message we wanted to send out was for the seven Cheyenne River Sioux Tribal Council Representatives who hold a high office on this reservation, asking for them to resign, or get impeached, for meeting behind the Oyates back, holding shady back door deals, trying to sell us out to TransCanada Energy (KXL)."
"It became clear the police were more than happy to hurt our people when they targeted one of our white allies. Then turned on the people they were supposed to protect and serve. We did not want this to have to go this far. Cheyenne River Sioux Tribal police instigated, by pulling out tasers and using excessive force."
"They pushed down an elder who was merely standing by and asking the police to stop," White Eyes said of the excessive force by police.
"This was followed by the arrests of Ikce Oscar, Jasilyn Charger, Alex Dotson, TaSina Sapa Win and myself," White Eyes said.

"Our fight is not with the police, our fight was not for self-interest, but the interest of the Cheyenne River Sioux Tribal Oyate. Our fight was not a publicity stunt, nor for self-gain."
White Eyes said the pipeline is using divide and conquer and offering bread crumbs.

"We understand that Foreign corporations have a history of Conquering and Dividing Indigenous people with Crumbs of promised money, and lame business investments. TransCanada Energy is one of those infamous Foreign Oil Companies, who used this tactic many times on Indigenous Nations in northern Alberta KKKanada."

"We as the Cheyenne River Oyate will not allow this Company (TC Energy). To divide us with mere Bread Crumbs. We as a people have a strong history of Resistance and Resiliency, in going head to head with the Oppressor. Cheyenne River has resisted the KXL Pipeline in the past and will continue to do so. We Stand!"

"I’m proud to have stood with all of you in the past and still to this day. Mni Wiconi!" Joseph White Eyes said.
Jasilyn Charger, Cheyenne River youth who was among the Lakota youths leading the movement to protect the water from the Dakota Access Pipeline at Standing Rock, said, "Wopila to all the family for your support and solidarity and the camera. The police brutality needs to stop."
TaSina Sapa Win called out for the impeachment of the Cheyenne River councilmen who met behind closed doors with TransCanada KXL pipeline.
"Impeach the sellouts! Honor the Treaties! No Keystone XL Pipeline."
TaSina Sapa Win also described the jail conditions.
"Also, our jail needs to be renovated and at least give inmates a blanket or mat or something. Sheesh, another woman in there was laying on the cold, concrete floor with a roll of toilet paper as a pillow. Treating inmates like dogs in kennels there."
"Wopila to everyone who stood in solidarity and made the necessary phone calls to tribal leaders and the courts to have us released within a couple hours," TaSina Sapa Win said.
The last Water Protector released was a non-native ally. Police took him to Walworth County in Selby, South Dakota. 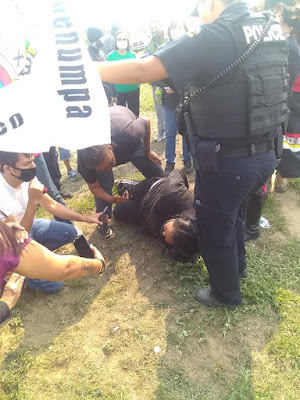 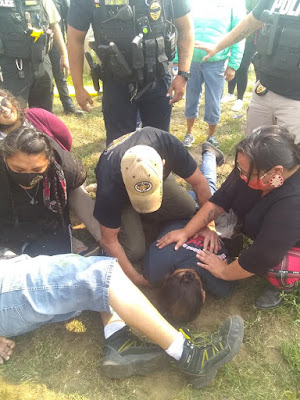 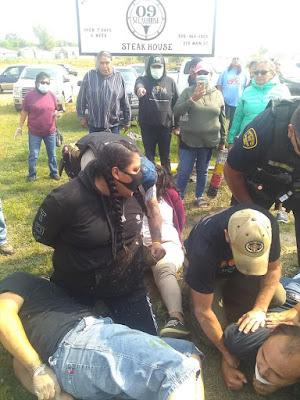 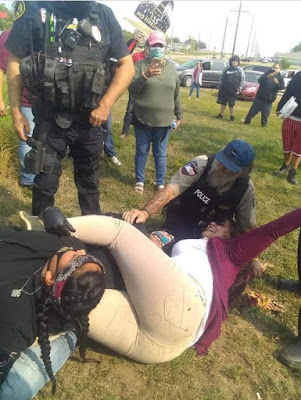 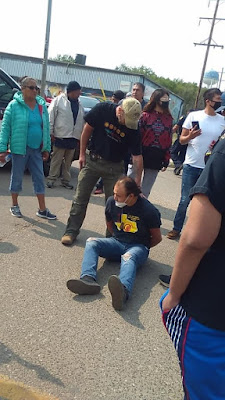 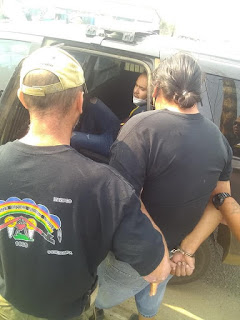 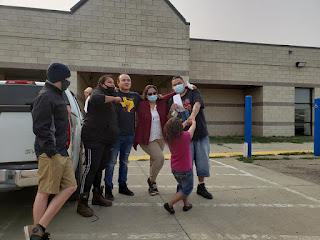 From Above:
Cheyenne River Sioux Tribal Council Representatives...meeting behind the Oyates back...

*Busted* Bravo for discovering and confronting the sellout. Excellent work!
We The people are Learning the tricks of the oligarch!
Sadly the powers that be—those who are charged with enforcing the will of the kingdom (the oligarch)they go to peaceful gatherings and do as ordered...and they do it at all cost. Loyal to none but the oppressor.

Sendin energy and Thank you to those who endure bodily harm “abuse” as you defend Life on and around Turtle Island
And Thank you All as we stand In Solidarity in defending Life over money
J.D. Ruybal