Uranium Mine Flooding Near Grand Canyon

Water in the desert is a rare and beautiful thing. Humans and animals alike need these springs and creeks to quench their thirst, which makes ongoing flooding at Canyon uranium mine, near the Grand Canyon, all the more troubling as millions of gallons of precious groundwater vanish into the air.

Imagine it’s a hot desert day in 2040, and you’re backpacking in a remote part of the Grand Canyon. Your water is running low, but your map shows a spring up ahead. And sure enough, in another mile, there it is, trickling from the earth. You feel a wave of relief at the sight of water in such a hot and dry place. But in moments that feeling is replaced with dread as you notice a sign poking out from the shrubbery that reads “Do Not Drink.” You realize that this precious water source may be one of the many you’ve read about that have been contaminated by uranium mining. I wish I could tell you that this is a farfetched scenario, but the truth is uranium mining on lands hydrologically connected to the Grand Canyon continues to threaten the future of this magnificent place. And while the fight to win a permanent mining ban moves to the Senate, Canyon Mine, exempt from the current temporary ban, sits fewer than 10 miles from the south rim of the Grand Canyon and the mine has major water problems.

Canyon Mine is still flooding

Since 2016, Canyon Mine has been taking on water. As of the end of 2020, over 40 million gallons of water contaminated with constituents including, but not limited to, uranium and arsenic have been pumped out of the mine shaft — almost 10 million gallons in 2020 alone. 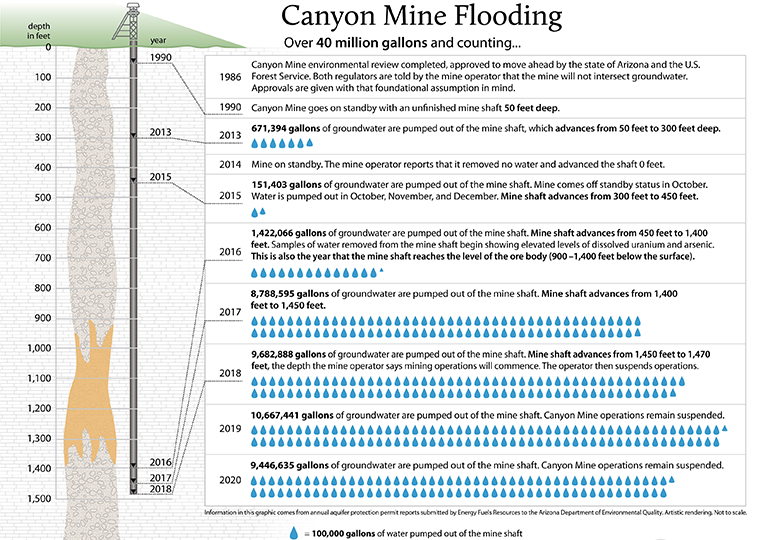 A flooding mine near the Grand Canyon is a big problem

Uranium is water-soluble, so when it comes into contact with oxygenated water it also becomes mobile. These are precisely the conditions created by breccia pipe mines like Canyon Mine. As the mine shaft at Canyon Mine floods, the exposure to air and water mobilizes uranium, carrying it to wherever the water travels.

The mine operator has measures in place — namely a liner on the bottom 12 feet of the mineshaft, and a system to pump contaminated water out of the shaft — that it claims currently prevents the water from traveling beyond the mine shaft. But even if that’s the case, those measures won’t be in place forever and aerated groundwater flow and exposed uranium, arsenic, and other contaminants will remain a threat long after the mine operator is gone.

No amount of human engineering is guaranteed to permanently stop groundwater flow, so even if an attempt is made to plug groundwater leaks from aquifer(s) pierced by the mine shaft, water inflow at the Canyon Mine site will likely remain a risk in perpetuity. This is problematic because the hydrogeology of the Grand Canyon region is incredibly complex and isn’t fully understood even by the hydrogeologists who study it. This means no one can say for certain that contaminated water won’t one day reach the deep aquifer beneath the mine that feeds the seeps and springs of the Grand Canyon, and the homelands of the Havasupai Tribe.

The Grand Canyon Trust and our partners are working hard to make sure the mine owner is held accountable. In 2020, after outreach from the Havasupai Tribe, the Arizona Indigenous Caucus, Rep. Tom O’Halleran, D-AZ, the Trust, and our partners, the Arizona Department of Environmental Quality indicated it will require Canyon Mine to obtain a groundwater permit that has the potential to be more stringent than the general permit the mine owner had before. The question now is whether the permit will actually be withheld if the company doesn’t meet stronger standards, or whether it will simply be granted and written as more of the usual, with not nearly enough protection for our groundwater sources in this water-scarce region.