LIBERATION DAY at Ocean Beach
By AIM West
http://www.aimwest.info
Photo: Lenny Foster at Alcatraz Sunrise Ceremony by Brenda Norrell
AMERICAN INDIAN MOVEMENT-WEST, AIM-WEST, invites the general public on Monday morning, February 15, 2010 to join us at Ocean Beach in San Francisco from 9 am to 12 noon, to acknowledge “Liberation Day” as a time for cultural recovery and struggle for self-determination.
Mr. Leonard Foster, Navajo/Dine Nation, Wounded Knee veteran, AIM activist and spiritual advisor, is the invited guest and Master of Ceremony. We stand in solidarity with “Liberation Day” and with the Pine Ridge Tribal Council resolution in South Dakota who acknowledge the occupation that occurred at Wounded Knee, which began February 27, 1973. We honor these veterans and those who struggle to retain their traditional homelands, their culture and spiritual freedoms. (The gathering at Ocean Beach located across from Beach Chalet restaurant, was specially considered to bring blessing and attention to land, environment, threat to ocean, sea and animal life, rising water levels and threat to islands, and climate and global warming).
Although February 15th is designated in the U.S. as ‘President’s Day’ (holiday) it also provides an opportunity to cast aside myths and instead raise historical awareness, and provides access to networking and building alliances with and between Indigenous communities, supporters and the youth, connecting issues with peoples being directly affected by colonialism, racism and poverty.
Drummers, dancers and singers are welcome. A fire ceremony with tobacco and sage offerings will be conducted in recognition of the many American Indian nations across the Americas, who struggle in these times of climate change/systems change, and to support their traditional and cultural way of life. The gathering will include invited speakers with a view to the seven generations, address violation of treaty rights, and unratified treaties, political prisoners like Leonard Peltier, climate change and global warming, and desecration of sacred sites.
The public is reminded the name of San Francisco is called in Muwekma Ohlone language “Chut’chuii” and is still alive and well. We assert also the Muwekma Ohlone representatives should be included in all future pertinent decisions affecting development projects in THE CITY! We also demand US President Obama to sign the UN General Assembly “Declaration on the Rights of Indigenous Peoples” adopted in 2007.
Special attention will be to address the boycott of the 2010 Winter Olympics in Vancouver, B.C. “No Olympics on Stolen Native Land”. Indigenous peoples are impacted by the long-term plunder of their lands, disproportionately experiencing poverty in urban areas, and are the primary targets of repressive policing and surveillance resulting in countless arrests. The 2010 Winter Olympics will take place on unceded Indigenous land from February 12-28 2010.
(gather at John F. Kennedy Drive/ The Great Hiway across from Beach Chalet Restaurant or take Muni bus # 5 Fulton Street) in San Francisco. The press is invited. A Mayan ceremony will open the occasion at 8 am.
Evening activities February 15th with special guests:
Bahai’i Center, 170 Valencia Street, San Francisco from 6 to 9pm-films:
“Broken Rainbow” Directed by Maria Florio and Victoria Mudd. Academy award best documentary.
In 1974, Congress passed a law forcing 10,000 Navajo Indians to relocate from their ancestral land to depressing tract housing in the Arizona desert. They were given until 1986 to finish the task, and despite testimonials before Congress and pleas to reconsider, the forced move went ahead as scheduled, a process which did much to complete the destruction of a people’s tradition that had been underway for over a century. The story also brings us into the uranium mines of the Southwest, where hundreds of workers slaved away while breathing in toxic gases that led to lung cancer (with no compensation of any kind, of course). And Peabody Coal, that beneficent entity that sought only profit, helped contribute to widespread air pollution and water contamination, which resulted in rates of birth defects that are twice the national average.
“The Earth is Crying” (75 minutes 1986, Dutch, English)
Five hundred years after Columbus, four Native Americans ‘discover’ the Netherlands and visit a nuclear power station, an anthropological museum, a zoo and a peace camp. With Leslie Marmon Silko, Floyd Red Crow Westerman, Bill Wahpepah and John Graham.
Donation at the door, lucky $ 7! Nobody turned away/wheel chair accessible/refreshments/snacks/vendors/raffle/speakers/announcements!

RICHMOND — A free forum on climate change and what it means to indigenous peoples will be presented from noon to 3 p.m. Feb. 20 at the Native Wellness Center, 260 23rd St.
Speakers at "System Change, not Climate Change" will include AIM West Director Tony Gonzalez and journalist Gemma Givens discussing their experiences at the Copenhagen Climate Talks and how climate change affects indigenous peoples.
There also will be a question-and-answer session, and the forum will be followed by a potluck gathering.
For details, call 510-232-7018.
Chris Treadway
Saturday February 20th 12-3pm
Native Wellness Center
260 23rd St. Richmond, CA 94804 (cross St MacDonald)
at February 14, 2010 No comments: 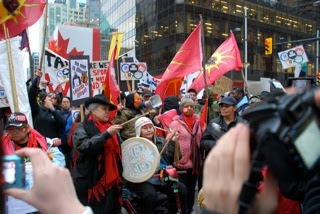 By Arthur Manuel
Censored News
http://www.bsnorrell.blogspot.com/
Photos by Arthur Manuel
Canada may have conducted it's Opening Ceremony for the 2010 Winter Olympics but not without a very strong opposition to Canada's terrible and tragic human rights and destructive environmental records. Thousands took to the streets in Vancouver from the Art Gallery to the BC Place Stadium.
Indigenous Elders led the way with chants of No Olympics on Stolen Indigenous Land.
The demo was a strong cross section between Indigenous and non-Indigenous peoples joining together to oppose the 2010 Winter Olympics for all the trouble they cause for the 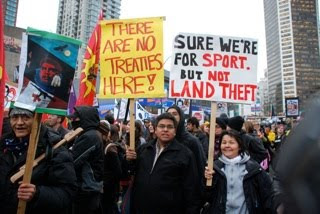 benefit of few big companies that cash in. The demo attracted the media and did disrupt the Opening Ceremony which would otherwise gone by without a hitch. Making substantive and positive pressure at the 2010 Winter Olympics is really important because Canada is trying to buy their way around their terrible human record at our expense. Any ways here are some pictures I took today of this very wonderful event. --Arthur Manuel
IPS news: Thousands protest Olympics
Olympic Resistance Network organiser Sozan Savehilaghi said, "The Olympics are taking place on lands that have never been surrendered. The people that are going to be impacted in a negative way the most are indigenous people; they have the highest rates of poverty, of abuse, and they are highly over-represented in prisons."
Read article:
http://www.ipsnews.net/news.asp?idnews=50325
at February 14, 2010 No comments:

Just when you think everything is going to be OK, you find you're in Crawford, Texas

TEXAS -- In the Fort Worth train station, we are like children waiting for Christmas, like children who only get presents at that one special time of year. All we want is for the Amtrak train to finally get here and take us out of this cold waiting room, this icebox inside the bigger freezer outside where huge flakes of snow are bonding with jagged chunks of ice.

Surrounded by the down-and-out of downtown Fort Worth, a woman on my right moans with pain at the cold and the pin in her wrist wrapped in gauze. President Obama is now on the television above us, saying we shouldn’t begrudge the executives who got multi-million dollar bonuses in bailout dollars.

I look around me at the pitiful mass of human beings. Most have lost their jobs or lost their homes, some have lost their hope. Everyone has lost something. Outside frail and desperate people are pushing shopping carts with rags through the snow. Sadder looking still are the young men in camouflage, all going somewhere, some home after a tour of duty, others on their way to war. They look so young, like fifteen year olds, all so very sad, all with downcast eyes, worried and troubled eyes.

Obama’s words about bonuses for the rich are salt on the wounds here and the wounds are fresh. Mothers with babies cringe at his words, as homeless people shuffle past the menacing security guards, trying to avoid being chased into the freezer outside.

It is cold, a rare snowstorm has blanketed Texas, and people are hungry.

Finally, we are onboard the Amtrak train and headed south. A blind man sits across from me. A couple goes to get him a cheeseburger and I think, yes, America is changing for the better. The grief and loss has yielded a gentler humanity, a more caring society.

But just as I ponder this, the Amtrak announcer tells us that we will soon be passing through Crawford, Texas, and the very café where George W. Bush and his wife liked to have their morning coffee. Ugh. What? How could this happen? I don't want to remember George W. Bush and the sorrow, grief and trail of torture and death he left around the world. I don’t want to remember this man who left a dark stain of greed across the land, a stain in the earth of blood and death.

A young man down on his luck without a dime from South Carolina says he has never been anywhere. He had never been out of South Carolina or the factory town where he worked. “You’ll love Texas,” an African American man says, who has lived here all his life.
I wondered. I wondered about this state that had executed so many people, including blacks, before the time when DNA could have proven the innocent were innocent. I wondered about this state, where genocide and massacres annihilated most of the original inhabitants and drove most of the remaining Native Americans to the state’s remote border regions.

I wondered about this state that glorifies a man like George W. Bush.

In the south, people say, “Wipe that grin off your face.” It is a tell-tale sign, you know. Bush’s grin after 9/11; Bush’s grin when he lied about the “weapons of mass destruction.”

In Austin, the Amtrak man tells us that the city has more live music than any other, even Nashville. He tells us about the bats that live under the bridge and, that because of a Supreme Court decision, this state capitol has the Ten Commandments displayed.
Contemplating Texas, I guess they need a little extra something.

But the hills and plains of northern Texas are now giving way to the Southwest, my Southwest, and I am going home to it. The closer we come to San Antonio, there is the raw and wild feel of the Southwest and the border, with all its grief and happiness, misery and celebration, stretching from here to California. I am going home.
at February 14, 2010 1 comment: