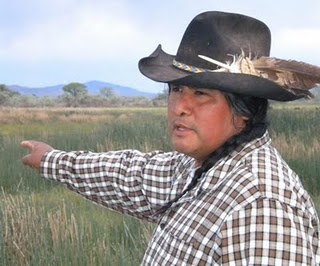 Kwassuh, traditional craftsman, took his case of gathering tule to Kuiu Kwaan Tlingit Tribal Judge Rudy James in Tacoma, after Kwassuh was charged and fined $800 by a Nevada game warden while gathering tules in May.

Kwassuh said on Tuesday night that a declaration is being prepared to protect Indigenous gathering rights. "This is a new movement," Kwassuh said.

After appearing before the Kuiu Kwaan Tribal Court, on Tuesday, July 19, 2011, in Tacoma, he said, "They do respect Indigenous culture, traditional lifeways, and acknowledge our sacred religious freedom -- all that I am trying to keep alive."

At home in Stillwater, Nevada, Kwassuh is a member of the Fallon Paiute Shoshone Indian Nation. However, he said two tribal council members want him to give into policies, limitations and regulations. In the struggle to retain Indigenous culture and lifeways, Kwassuh said he and other traditional people refuse to give into the council's restrictions and authority.

Kwassuh was gathering tule in the ceremonial way when he was cited by a Nevada game warden and given fines of $800 in May. For the past 18 years Kwassuh, 45, has worked an average of 170 hides a year of deer, moose, elk, buffalo and antelope in the traditional style of brain-tanning. Many items are made for powwow dancers, including moccasins, fan handles and hair wraps. He also makes items for ceremonies such as various sized hand drums. No chemicals are used, only natural elements such as the sun, water, brains, fire and stretching the hide by hand. This direct hands-on experience keeps him in touch with the spirituality of the animal hide that he works with.

Hide work is not a hobby, it is a way of life, he said.

Hunting and plant gathering are very sacred to Kwassuh and the tanning of the hide is the end result in giving an animal honor by using it for nutrition, clothing, tools and ceremonies. These traditional ways were taught to him by elders, friends and relatives who shared stories with him when he was a child, as well as many experiences from his youth into adulthood. Living on the Fallon Paiute Shoshone Indian Nation, Kwassuh has seen and experienced the loss of Native culture among his people and other tribal people at a drastically growing rate.

Demonstrations and workshops are the best way that he can reach many people at one time. He is always willing to teach whoever is willing to listen and learn. All ages have been successful and all the hard work and experience make it all worthwhile.

From start to finish, each hide is different and has its own individuality. Kwassuh has learned the dangers and extreme physical work that is needed in all seasonal conditions throughout the year. Full faith in the Creator has kept him safe and much thanks is given to the traditional people in his life that he has learned from.

On May 14, 2011, my son and I went to gather the tule plant in order to make some tule duck decoys for my youngest son’s elementary class demonstration. I was going to share the importance and use of what the Northern Paiute people did in the past and allow the class to realize and experience the importance of today’s usefulness of the tule plant. Also, to see and hear from a real “Toi-Ticutta” descendant (this means cattail eaters in the Northern Paiute language.)

At the end of gathering the tules on Saturday afternoon, we were confronted by a U.S. Fish and Game warden. When he asked, I let him know why I was out there. The officer ignored everything I said and proceeded to write his citations. I stated to the officer that there were no signs in sight indicating NO PLANT PICKING or DESIGNATED ROUTES ONLY. The officer still ignored what I said and proceeded with his citation writing.

I then advised the officer that he was interrupting the ceremonial tule plant gathering methods that were taught to me by my people. The end result was that the officer confiscated my bundle of tules -- which also included the bundles that was picked on Indian land. He then gave me two citations: “Take any animal or plant without authorization,” with a fine of $625.00 and “travel off a designated route,” with a fine of $175.00.

I have always known of this traditional area, by my grandmother and other elders, of a place where we can come and get what we need. Now I find that my aboriginal rights are being disregarded and this area has been taken over by non-Native people. Now, the tourists are more welcome. The non-Natives recognize my ancestors of the past. But now I face a punishment for doing as I was taught and am also being punished for traveling on my own aboriginal home territory.