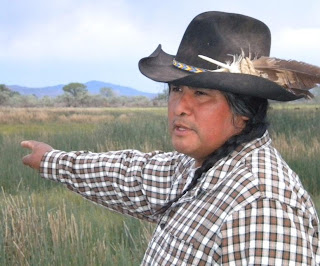 NORTHERN PAIUTE STILLWATER INDIAN LAND, Nevada -- Northern Paiute Wesley Dick, known as “Kwassuh” by his people, was gathering tule in the ceremonial way when he was cited by a Nevada game warden and given fines of $800 in May.For the past 18 years Kwassuh, 45, has worked an average of 170 hides a year of deer, moose, elk, buffalo and antelope in the traditional style of brain-tanning. Many items are made for powwow dancers, including moccasins, fan handles and hair wraps. He also makes items for ceremonies such as various sized hand drums. No chemicals are used, only natural elements such as the sun, water, brains, fire and stretching the hide by hand. This direct hands-on experience keeps him in touch with the spirituality of the animal hide that he works with.
Hide work is not a hobby, it is a way of life.
Hunting and plant gathering are very sacred to Kwassuh and the tanning of the hide is the end result in giving an animal honor by using it for nutri

tion, clothing, tools and ceremonies. These traditional ways were taught to him by elders, friends and relatives who shared stories with him when he was a child, as well as many experiences from his youth into adulthood. Living on the Stillwater Indian Nation, Kwassuh has seen and experienced the loss of Native culture among his people and other tribal people at a drastically growing rate.
Demonstrations and workshops are the best way that he can reach many people at one time and he is always willing to teach whoever is willing to listen and learn. All ages have been successful and all the hard work and experience make it all worthwhile.
From start to finish, each hide is different and has its own individuality. Kwassuh has learned the dangers and extreme physical work that is needed in all seasonal conditions throughout the year. Full faith in the Creator has kept him safe and much thanks is given to the traditional people in his life that he has learned from.
WESLEY AND TULES: His story
On May 14, 2011, my son and I went to gather the tule plant in order to make some tule duck decoys for my youngest son’s elementary class demonstration. I was going to share the importance and use of what the Northern Paiute people did in the past and allow the class to realize and experience the importance of today’s usefulness of the tule plant. Also, to see and hear from a real “Toi-Ticutta” descendant (this means cattail eaters in the Northern Paiute language.)
At the end of gathering the tules on Saturday afternoon, we were confronted by a U.S. Fish and Game warden. When he asked, I let him know why I was out there. The officer ignored everything I said and proceeded to write his citations. I stated to the officer that there were no signs in sight indicating NO PLANT PICKING or DESIGNATED ROUTES ONLY. The officer still ignored what I said and proceeded with his citation writing.

I asked the officer if he acknowledged the American Indian Religious Freedom Act. The officer said "NO." I also asked the officer if he understood the Native culture, the officer said, "NO." I then let the officer know several times that a majority of the tules that I gathered were picked on the Stillwater Indian Nation and was still ignored.
I then advised the officer that he was interrupting the ceremonial tule plant gathering methods that were taught to me by my people. The end result was that the officer confiscated my bundle of tules -- which also included the bundles that was picked on Indian land. He then gave me two citations: “Take any animal or plant without authorization,” with a fine of $625.00 and “travel off a designated route,” with a fine of $175.00.
I have always known of this traditional area, by my grandmother and other elders, of a place where we can come and get what we need. Now I find that my aboriginal rights are being disregarded and this area has been taken over by non-Native people. Now, the tourists are more welcome. The non-Natives recognize my ancestors of the past. But now I face a punishment for doing as I was taught and am also being punished for traveling on my own aboriginal home territory.
-----------------------------------------------------------------------------------------
A SIGN POSTED READS AS FOLLOWS:
The Marshes of Carson Sink
Home for the Numa People
Prehistoric and Historic Hunting, Fishing and Burial Grounds
Stillwater Marsh provided the Numa people with food, water and shelter in an otherwise desolate region. The Numa people caught fish, netted waterfowl, gathered seeds and buried their dead in the marsh. Cattails and bulrush supplied food and the raw material to build houses, duck decoys and boats. Ducks, coots and muskrats furnished meat and skins for clothing. In the uplands the Numa people gathered pinenuts and hunted bighorn sheep and rabbits. The furs from the rabbits were woven into blankets and capes. Stone for projectile points, knives, mortars and pestles was transported many miles from the mountains back to the marsh. Only Clues Remain
Archeological materials demonstrate that for thousands of years Stillwater Marsh was productive wildlife habitat. The ancient remains of houses, fire hearths and food and tool storage pits indicate that, for much of the year, the Numa people relied heavily on the bounty of the marsh. Archeologists have discovered offerings with human burials, suggesting that the people held a special reverence for the land and its wild animals. Help preserve our cultural heritage. Laws protect archeological sites and artifacts from illegal collection, excavation and vandalism.

Traditional gathering is protected. Shame on NV Fish and Game for their ignorance.

Thats just wrong! The tule is not an endangered plant. Traditionally, the tule root was used for food and the tule itself is used to make duck decoys by the toi-dicutta (Paiute Tule Eaters) of the Fallon area. They cite "take any animal or plant..." does this include collecting sage for smudging. I wonder... This is another demonstration of the gov't taking away our traditional freedom.

Thats just wrong! Another demonstration from the US gov't denying us from practicing our traditional and religious ways. The tules in Stillwater (Nv) are the Paiutes major plant. The roots were used for food and the plant itself was used to make tule ducks, boats, mats and weaved into an array of items useful to an individual. USF&G cite "taking animals and plants..." I wonder, would that include SAGE for smudging. What r they going to take next.

Thats just wrong! Another demonstration from the US gov't denying us from practicing our traditional and religious ways. The tules in Stillwater (Nv) are the Paiutes major plant. The roots were used for food and the plant itself was used to make tule ducks, boats, mats and weaved into an array of items useful to an individual. USF&G cite "taking animals and plants..." I wonder, would that include SAGE for smudging. What r they going to take next.

The American Indian Religious Freedom Act is only 2 paragraphs long: why didn't the officer supposedly in charge of enforcing the federal law know it? The first paragraph covers this situation pretty straightforwardly:
"On and after August 11, 1978, it shall be the policy of the
United States to protect and preserve for American Indians
their inherent right of freedom to believe, express, and
exercise the traditional religions of the American Indian,
Eskimo, Aleut, and Native Hawaiians, including but not
limited to access to sites, use and possession of sacred
objects, and the freedom to worship through ceremonials
and traditional rites."

An armed person with official control over other people who does NOT know the law they are there to enforce is a dangerous thing. What separates that person from a "thug"? If they don't know the law, how do they decide who they are supposed to arrest? Scary stuff.