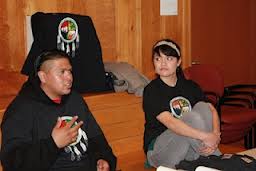 PUYALLUP INDIAN NATION, Wash. -- Carl "Bad Bear" Sampson, Western Shoshone, walked and ran across America in 2008, on the Longest Walk northern route. Tonight, Bad Bear was on the Puyallup Indian Nation, and joined a Puyallup canoe family for a family dinner. Bad Bear and Chris Francisco, Navajo from Shiprock, N.M., and route coordinator, were at the Puyallup Tribe Kwawachee Center. They are preparing for the Longest Walk northern route for diabetes. The walk is to raise awareness of diabetes and encourage healthy eating and living. The walkers and runners will leave Portland, Ore., in two weeks, running through Idaho, Montana and the Dakotas, on their way to DC., where they will meet the southern route. Photo 1: Carl Bad Bear Sampson by Marie Littlemoon. Photo 2: Bad Bear and Ellyn photo by Chris Francisco. Photo 3: Puyallup canoe family by Chris Francisco.
More info:
http://www.earthbornproductions.com/
Please consider sharing a pot of hot soup or coffee, or maybe some hot Indian tea, when the walkers and runners pass through the cold north. They'll also be needing places to sleep at night. They'll be sharing their stories with you:

Diplomats protecting mining interests of Barrick, Newmont, BHP:
US, Canada, Australia, UK, Switzerland and South Africa
By Brenda Norrell
Censored News
http://www.bsnorrell.blogspot.com
Photo: One of three shot by police in 2005, one died during the opposition to copper mining in Peru
.
(Feb. 1, 2011) The arrogance of the US and its cheerleading for corporate copper mining in Peru is obvious in two cables just released from Wikileaks. The diplomatic cables reveal the US promoting multi-national corporations, while targeting Indigenous activists and their supporters.

The new cables reveal that a core group of diplomats formed an alliance with mining companies to promote and protect mining interests globally. The diplomats were from the U.S., Canada, U.K., Australia, Switzerland and South Africa.

While rallying for copper mining in Peru, US Ambassador J. Curtis Struble failed to point out in the cables the torture and murder of Indigenous activists by mining companies, near the border of Peru and Ecuador. Struble failed to reveal the long-term destruction to Mother Earth and poisoning of the land, water and air from copper mining.

Further, Struble named names, while promoting the mining corporations. Struble targeted specific NGOs and urged the rotation of teachers and those supporting Indigenous activists out of Peru.

Peru activist Nicanor Alvarado Carrasco, coordinator of the Vicarate for the Environment, is among those defending the land. Nicanor said the mining company Minera Majaz, a subsidiary of the British Montericco Metals, is operating illegally on their territories.

“This mine company is a threat to the environment and to people’s rights to food and water,” said Nicanor in an interview.

"This is a moment for the world citizens to show that world citizenship exists. You from the North can help stop illegal mining companies, like Monterrico Metals, from contaminating our land, killing peasant leaders, and from torturing the active Minera Majaz opposition,” Nicanor said.

Struble, the former Ambassador to Peru, however, had only insults for Indigenous Peoples struggling to protect their land. Struble was US Ambassador in Lima in 2005 when he wrote the cables.

While seeking sympathy for the copper mining company, Struble targets those defending the land.

Struble said in one cable: “The anti-mining forces in action in Majaz represent a strange group of bedfellows indeed -- the Catholic church, violent radical leftists, NGOs, ronderos and perhaps narcotraffickers. These organizations are competing for a leadership role but in some cases also cooperate. The extent to which the church is tied into the ronderos and radical left is both controversial and still open to question. Unlike recent conflicts in Southern Peru (e.g., Tintaya) the protests in Majaz are not aimed at forcing a redistribution of royalties or more generous economic support from a mine. Northern Peru has a reputation for being more anti-mining than the South, where the industry is better developed and more of the local populations see benefits from the activity. The objective of protesters in Majaz is to kill the project while it is in the exploration phase -- before, presumably, a pro-mine constituency can develop in the area."

Ambassador Struble does not seem to have a clue why the people who live on the land want the mining halted, or the impacts for future generations.

Struble said US and Canadian Ambassadors, and a delegation of diplomats, met with the mining companies to discuss the opposition to mining.

"Consensus among the companies is that radical forces (Communist Party-Patria Roja, drug traffickers and rural defense committees--ronderos) are increasingly active in rural communities, seeking to target mining operations throughout the country."

The US and Canadian Ambassadors meeting with mining companies included: Antamina, Newmont (Minera Yanacocha), Minera Quellaveco, Barrick, BHP Billiton (Tintaya mine). The diplomats were from the US, Canada, the Swiss Charge, the new Australian Consul General, and the British Embassy Trade and Investment. "A representative from the South African Embassy, which forms part of this diplomatic mining group, was unable to attend," the cable said.

Their goal was to improve the climate for investments and security around mines, the cable said.

Three of these countries -- US, Canada and Australia -- at this meeting in Peru were among the four countries who voted against the UN Declaration on the Rights of Indigenous Peoples when it was adopted by the UN General Assembly. New Zealand was the fourth.

In today’s London Guardian, Tim Webb points out that the mining company in Peru is part-owned by a British FTSE 100 company. In a second cable, Struble advocates for the removal of teachers and Catholic bishops and teachers to new posts away from "conflictive mining.”

Diplomats were urged to persuade the Peruvian government and church to "rotate" such professionals out of sensitive areas.

In the second cable, an executive from Anglo American's Minera Quellaveco reportedly blamed Oxfam America and Friends of the Earth for largely “fomenting anti-mining attitudes” at the meeting, it was alleged.

A spokesman for Oxfam America said that while such NGOs tried to make sure companies treated communities "justly", they only did so through legal channels and never advocated violence, the Guardian reported.
Meanwhile, in the United States, two of the mining companies that diplomats met with to promote and protect, continue to destroy sacred lands. Western Shoshone have been fighting mining by Newmont and Barrick mining in their homelands. Currently before the US federal court is Barrick's plan for an open pit gold mine on sacred Mount Tenabo.
Peru mining cables:
Cable 1:
http://213.251.145.96/cable/2005/08/05LIMA3571.html
Cable 2: Posted and highlighted by London Guardian
http://www.guardian.co.uk/world/us-embassy-cables-documents/38881
Today's Guardian article:
http://www.guardian.co.uk/business/2011/jan/31/wikileaks-bhp-billiton-peru-mining-communities

Nicanor speaking in Cochabamba, Bolivia, at the World Conference on Climate Change and Mother Earth, in April: