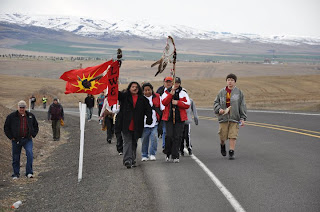 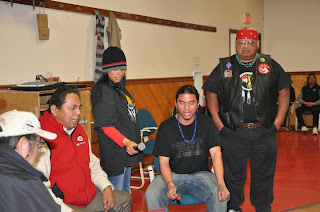 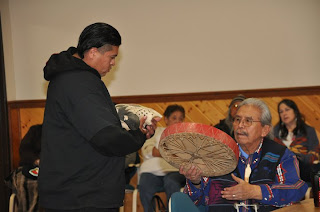 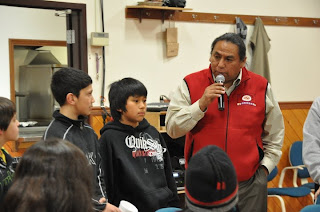 (Thursday, Feb. 24, 2011) Long walkers on the northern route are still trekking through the snow. Lisa Peake, Ojibwe/Pomo, said Wed night, "It snowed all day. We have 25 more miles to bring the walk into Pendleton, heading Walla Walla way and the salmon talks." On Wednesday, the community of Pendleton, Oregon, joined for a morning walk. On Thursday, Navajo coordinator Chris Francisco said the walkers and runners appreciate the warm welcome by their current stay host, the Umatilla Indian Nation. The next base camp is Lapwai, Idaho, next week.
at February 24, 2011 No comments: 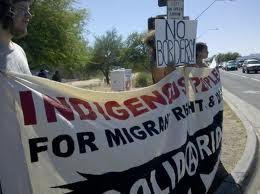 Lawyers William G. Walker and Jeffrey J. Rogers represented the six as the city prosecutor called Border Patrol agents and Tucson Police to testify. The defense argued the trespassing charge was not properly filed and were granted a request to file a memorandum addressing the technicality. The trial is expected to continue on March 22, 2011. Corresponding rallies and actions are being planned.

At 1:30 pm people gathered in downtown Tucson at Library Park for a rally and then took the streets with banners reading, “Indigenous Resistance, Protect Sacred Places”, “Free Movement for People Not Commerce, Tear Down the Wall” and chanting “No Borders, No Border Patrol.”

Two people were arrested for allegedly hanging a banner that read “Las Paredes Vueltas de su Lado son Puentes (Torn Down Walls Become Bridges)” on a street traffic light. They were arraigned and released at 8 pm at Pima County Corrections.

Additional banners were hung at various locations throughout Tucson stating “Egypt, Wisconsin, O’odham Solidarity," “No raids, No deportations, No colonialism” and “Stop Militarization on Indigenous Lands."

O’odham Elders attended the court proceedings to demonstrate their support.
Donations can be made to support direct action efforts through Border Opposition Action Fund at http://www.borderopposition.blogspot.com/

END BORDER MILITARIZATION NOW!
Communiqué from the occupiers of the Border Patrol Headquarters in Tucson, Arizona

We demand that the Border Patrol (BP), Immigration Customs Enforcement (ICE), their parent entity, the Department of Homeland Security (DHS), and the Obama administration end militarization of the border, end the criminalization of immigrant communities, and end their campaign of terror which rips families apart through increasing numbers of raids and deportations.

The state thrives off of the climate of terror and fear that racist laws like HB2281 and SB1070, and new proposed laws like SB1611, 1308, 1309, 1405, have caused. This terror also manifests with thousands of troops invading indigenous lands, such as the Tohono O’odham, Yaqui, Kickapoo, Lipan Apache, to name a few. Since the creation of the current U.S./Mexico border, 45 O’odham villages on or near the border have been completely depopulated. This terror manifests with the bones of thousands – making the southern Arizona desert a grave yard, where the hopes and dreams of migrant families are stomped into the ground by border patrol agents, National Guard, minute men, and profiteering coyotes.
Through the military strategy of terror and fear the state maintains power and control.
We take direct action because we have decided not to be afraid. We are more afraid of not standing up to the state and what other crimes against humanity will be committed if it remains unchallenged.
We are not guilty of criminal trespassing or disorderly conduct.
The state, and by extension the border patrol, is guilty of occupying and destroying indigenous communities and ripping families apart. The development of the border wall has led to desecration of ancestor’s graves, it has divided communities and prevents them from accessing sacred places. When will this end?

These buildings, the court house, are made of brick and mortar and are the same brick and mortar that are the operation streamline immigration court just down the street. It is a direct manifestation of this system’s criminalization, where in the 3 hours that we’re in court today, nearly 100 people will be detained, adjudicated and deported through the streamline process.

Who are these building for? Who do they benefit? These are the same brick and mortar prisons are made of. It’s the same steel and concrete that is ripped from Mother Earth that’s used to build the border wall.

Politicians aren’t going to negotiate away our oppression. They are sitting in the chairs in their offices that are built on it. Our oppressors can only maintain their oppression as long as we are afraid of them.

If they are not going to do it, then we are going to find creative and direct ways to ensure that our communities are safe. We recognize that this is not going to happen within the walls of these institutions, these walls, these borders. It’s only going to happen if we tear them down. What does that look like?
Let’s come together, strategize, and embrace diverse tactics to effectively become the answer.
Today we also shed the term immigrant that has been used to attack our brothers and sisters, mothers and fathers, grandmothers and grandfathers, and children, many of whom are also indigenous, and to acknowledge and help restore the full human dignity that has been stripped away. To be immigrant should not be considered a crime unless 99 % of the U.S. is going to be ashamed and guilty of their pasts.
Our relatives are attacked on both sides of the border by colonial governments. The migration that the U.S. government is attempting to stop is driven more than anything else by the economic policies of the U.S. Free trade agreements such as NAFTA have severely reduced the ability of Mexicans and others from the global south to sustain themselves by permitting corporations to extract huge amounts of wealth and resources from these countries into the U.S. This has led to millions of people risking the terror and death that so many face to cross into the U.S. looking for ways to better support their families.

If the U.S. really intends on reducing migration it must end its policies of exploitation and wealth extraction targeted at the global south and instead pursue policies of economic, environmental and social justice for all human beings on the planet, thus reducing the drive to immigrate. But are they really going to do that?
Direct Action is about Direct Democracy. Building community is about communication, having respect for each other and doing something.
This is a struggle for freedom of movement and self-determination for all!
No racist laws, No colonial borders, WE WILL NOT STOP!
~NO BORDERS NO BORDER PATROL~
at February 24, 2011 1 comment: