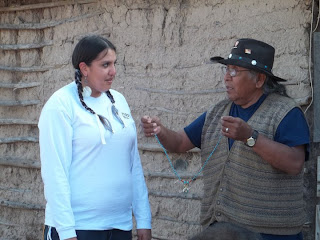 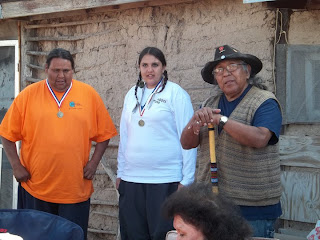 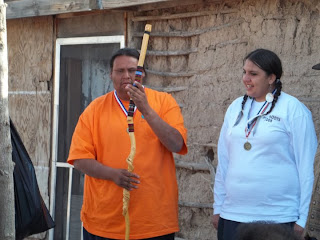 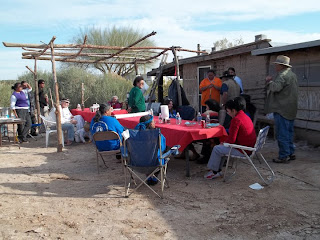 Photos copyright Preston J. Arrow-weed, published with permission by Censored News.
Preston J Arrow-weed, on behalf of the Pipa A-Koots Quechan elders, honored Long Walkers from the southern route 3 for diabetes. Arrow-weed is the grandfather of Quechan Mucaw Jefferson and raised Mucaw, who walked on the southern route in 2008. Mucaw passed to the Spirit World after the Longest Walk 2. Being honored, in the photos, are long walkers Gato, who carried Mucaw's staff, and Gina, who carried the Quechan flag, from La Jolla into Quechan territory on Long Walk 3 this week.
at February 26, 2011 2 comments: 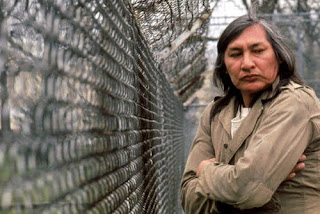 THE COEN BROS 'TRUE GRIT' SHOWS AMERICAN INDIAN IN HANGMAN STAND AS THE 83RD ACADEMY AWARDS APPROACHES
By Red Nation Media
Photos: Oscar nominees Will Sampson and Graham Greene
.
LOS ANGELES -- This weekend is the 83rd Academy Awards Show and where is American Indian cinema and image in all this? Where’s the diversity, the American Scene?

In the latest affront to American Indians in Hollywood, True Grit shows an
Indian on an hangman stand, who starts to speak and his voice is cut off.
This is a metaphor for how Hollywood treats Native images and filmmakers.

Native actors worked more when silent films were produced, than they do
today. Twenty years after the Oscar winning Dances with Wolves, American Indians are still relegated to playing savages. Where is the modern voice of the American Indian?

“If people of color are not portrayed in multifaceted ways or remain invisible and the main images of us as undesirables, then the public perception is that we are parasites and strangers in our own land. How painful it must be for Native Americans, who are the only minority who was the majority in the U.S., to be portrayed mainly in regalia on period films and not as productive members of our society," said Jesse Jackson in an open letter to the entertainment industry.

In the history of Hollywood, Indians have been stereotyped. There have been trailblazers. In 1972 Marlon Brando, an activist for American Indians, refused the Oscar for the Godfather and sent Sacheen Littlefeather to accept it instead. In 1975 Will Sampson won acclaim for One Flew Over the Cuckoo's Nest, but did not receive a nod from Oscar for his memorable role as Chief Romden. In 1991 Kevin Costner’s Dances with Wolves showed American Indians playing Indian roles and speaking their own native language. It proved that American Indian talent is bankable and marketable. 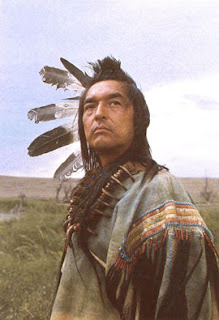 In fact there have only been two Native actors to be nominated an Oscar; Chief Dan George for his role in the 1970 Little Big Man and Graham Greene for his roles in the 1991 Dance with Wolves and The Green Mile (1999).

American Indian women have not been recognized yet! The closest they came
was Joanelle Romero’s documentary, American Holocaust: When It’s All Over
I’ll Still Be Indian, in 2000, narrated by Edward Asner. This documentary is the first and only film that compares Hitler’s attempted genocide of German Jews with the U.S. government’s treatment of American Indians and the lasting effects on the culture today.

Twenty-two shorts were entered that year. Nine were picked for consideration. American Holocaust When It’s All Over I’ll Still Be Indian, was part of that nine chosen.

“American Holocaust is very powerful and honest. It is probably more than most non-Indian people, and unfortunately, most Indian-people, want to acknowledge or hear. It is a laboring and sad truth that anyone who is truly Indian understands and lives with to some degree everyday. As polarizing as this movie is, its existence is critical for the hundreds of thousands of people that come to understand more about the real story and for those that need to reflect and heal as they walk their own red road," said Chris Eyre, director/producer of Smoke Signals and Skins.
“The talent is out there," Romero said. “There’s San Francisco’s American Indian Film Festival, Canada’s ImagiNATIVE Film Festival, and this year’s Sundance delivered a great pool of talented Native filmmakers."
Romero, director of Red Nation Film Festival, founded the festival eight
years ago in Los Angeles, to bring American Indian images, independent
films, documentaries, and Native talent to the forefront of the industry.

The Red Nation Film Award, which is equivalent to the Oscar, was born in 2010. “We cannot wait for the industry or other Award shows to honor us and recognize us, we have to do it ourselves, show Hollywood we are here, we are alive and worthy of being recognized and have Oscar worthy films and performances," stated Romero.

We expect a powerful list of films this year at the 8th annual Red Nation Film Festival – the Authentic Voice of American Indian & Indigenous Cinema Star-Studded Red is Green Carpet Galas November 1st to the 7th, 2011.

Red Nation Celebration is the parent organization of Red Nation Film Festival and is the founding non-profit of the American Indian Heritage Month (AIHM) in the City/County of Los Angeles, every November. The
seven-day film festival held during AIHM in the Entertainment Capital of the World-Los Angeles and home to the largest American Indian Urban Community in the Country, celebrates American Indian & Indigenous Cinema in supporting emerging and established filmmakers, entertainers, performing artists, and cultural events.