Ihanktonwan Sacred Pipe (Canupa) Run to Pipestone Quarry and back to Yankton.
Censored News
Ihanktonwan youth are running and invite other runners to join them! 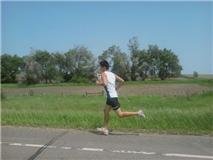 Faith Spotted Eagle said, "The run has been done for many years. We just returned yesterday from taking 11 runners for the route from Wounded Knee to Cedar Pass. There are a core group of youth runners who are running with heart and spirit.
"They are making a loop through South Dakota Indian communities, from Greenwood (June 5) to Pipestone Minnesota and back to Greenwood on June 21st.
"Runners are always welcome."
They are running for protection of the sacred pipestone and to halt exploitation of it.
On facebook at:
http://www.facebook.com/pages/2011-Spiritual-Run-for-the-Sacred-Pipe/151145011625768?ref=ts&sk=wall#!/pages/2011-Spiritual-Run-for-the-Sacred-Pipe/151145011625768
at June 09, 2011 No comments:

TOWAOC, Colo. -- Silence surrounds the murder of Spencer Everett Posey, 34, who was shot in the abdomen by a BIA police officer on Posey's homeland of Ute Mountain Ute. Posey, the father of four and a referee at basketball games, was shot on May 22 and died the next day.
Posey's family believes he was shot in the abdomen by the BIA officer as he turned to surrender.
The FBI issued only a brief statement saying his death is under investigation, but the family is pursuing their own investigation. Family members say they were not contacted when Posey was shot at 5:30 a.m. and taken to the hospital. They were not contacted until after noon and want to know what his last words were.
Posey was pursuing a career in criminal justice and had reported to the Ute Mountain Ute Tribal Council several times that he was being harassed by BIA police.
Ute say they want more Ute officers. They can see the white officers taking target practice at the silhouettes of dark-skinned criminals.
Read the full story at http://www.navajotimes.com/news/2011/0611/060911ute.php
Obituary: http://www.tributes.com/show/Spencer-Posey-91571648
FBI statement: http://www.fbi.gov/denver/press-releases/2011/statement-regarding-ute-reservation-incident
at June 09, 2011 No comments: