A Victory for Protection of Sogorea Te, Glen Cove

A Victory for Protection of Sogorea Te
July 20, 2011
http://www.protectglencove.org 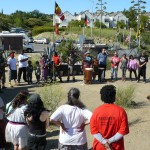 After 98 days and nights of a continuous prayer vigil, the Committee to Protect Glen Cove is pleased to announce a victory in the struggle to protect the sacred grounds of Sogorea Te/Glen Cove.
Yesterday, the Yocha Dehe and Cortina tribes established a cultural easement and settlement agreement with the City of Vallejo and the Greater Vallejo Recreation District (GVRD). The agreement sets a legal precedent for granting Native peoples jurisdiction over their sacred sites and ancestral lands. The cultural easement forever guarantees that the Yocha Dehe and Cortina tribes will have legal oversight in all activities taking place on the sacred burial grounds of Sogorea Te/Glen Cove. It also represents a significant step forward in enacting tribal sovereignty, as the first such easement under CA Senate Bill 18 to be negotiated at the city and recreational district levels.
Read more ...
http://protectglencove.org
at July 20, 2011 No comments:

The People’s Movement Assembly Southwest Organizing tour from June 1st to July 6th, 2011 served as political and social catalyst for flow and exchange of information and network building related to the social and political struggles of the disenfranchised communities of the Southwest of the United States. On one hand, encouraging discussion, analysis and understanding of the issues of the Southwest indigenous community such as: land and water contamination, warfare production near civilian communities, lack to access to quality food for indigenous communities, right to food sovereignty, violations of sacred land and mountains, and other hand, taking a closer look to the Chicano movement history and the young people involvement in community organizing. How these young people are seeking to find through cultivation of the land a way to identify issues and seek a different approach for fighting back.
Nonetheless, these struggles are very much invisible to the rest of the country and disconnected to the realty that touches upon the reality of the rest of the United States and Latin America. Read more ...
http://peoplesmovementsassembly.blogspot.com/2011/07/living-peoples-movements-assembly-in.html
at July 20, 2011 No comments: