Protect the Peaks protester locks down at wastewater plant

Flagstaff Community Members: ‘No Wastewater on the Peaks’

Reposted with permission at Censored News

Protester Locks Down City of Flagstaff Rio de Flag Waste-water Reclamation Plant
FLAGSTAFF, Ariz — At approximately 10:30 am one protestor locked down to the Rio de Flag Wastewater Reclamation Plant. A march leaving from near-by coincided with the lock-down and dozens of people converged on the site to demand that the city of flagstaff and Snowbowl protect the people, ensure clean water and clean snow!
On Sunday evening, protesters reported that there were no arrests during the lockdown and protest. 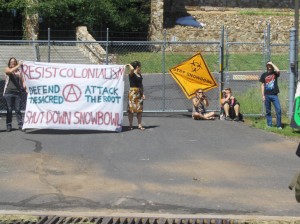 By Protect the Peaks
Posted at Censored News
http://www.bsnorrell.blogspot.com

FLAGSTAFF, AZ -- On Sunday morning, we will march in Flagstaff to protest the desecration of the sacred San Francisco Peaks with sewage snow. This will be a fun, family-friendly march with chanting, street theater, and much more!

You wouldn’t play in recycled sewage, and you certainly wouldn’t let your children play in it. But the
Flagstaff City Government has voted to sell recycled sewage water to Snowbowl, which they intend to put on the sacred San Francisco Peaks.

This is extremely dangerous. We know that reused sewage effluent contains endocrine disruptors,
pharmaceuticals, and pesticides. And the news keeps getting worse. On Wednesday, August 13 th, the Center for Biodiversity released a study that found antibiotic-resistant genes in the recycled wastewater.
The presence of these genes “dramatically rebounded at the point of use”. These dangerous chemicals
and bacteria distort, desecrate, and destroy the local ecosystem and can be ingested or absorbed by
skiers on the mountain, causing adverse health consequences.

In light of these haunting facts, members of the community have been compelled to take to the streets
in response. We will not accept this defilement of sacred peaks or the destruction of valuable life on
those peaks. We are willing to put our bodies in the way of this deranged process, using all they have to protect what is most valuable.
at August 19, 2012 No comments: