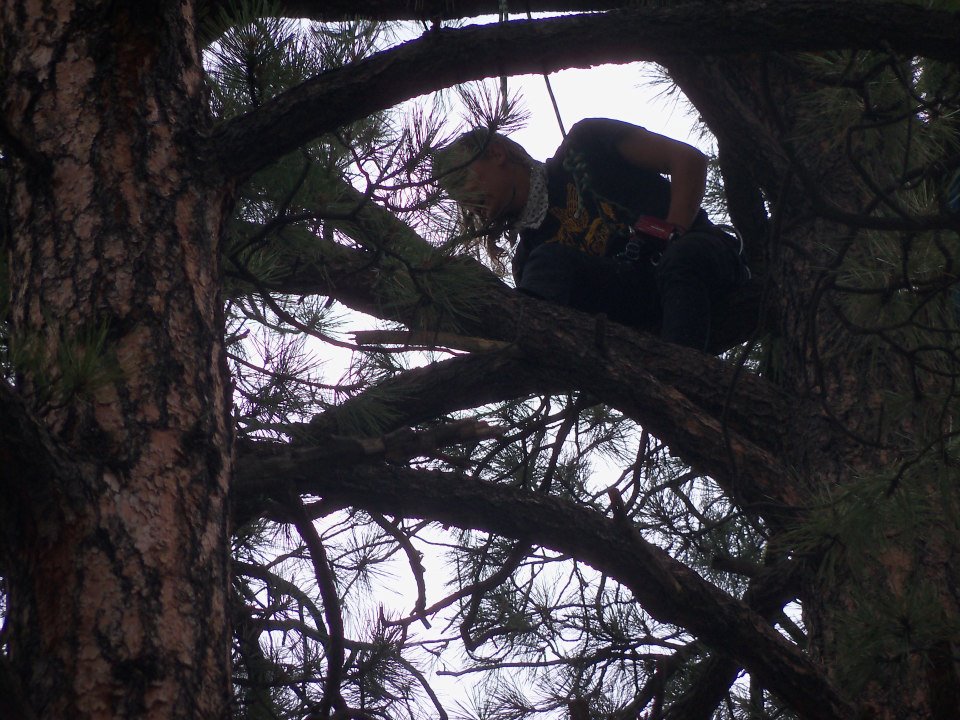 Tree Sitter begins third day, after two supporters locked down to protect him

FLAGSTAFF, Ariz. – Protect the Peaks treesitter James Kennedy spent his second night, 80-feet above where two supporters locked down and were arrested on Tuesday. The action is halting the pipeline construction of the Arizona Snowbowl, which plans to use sewage water to make snow for tourists on sacred San Francisco Peaks.
Snowbowl workers recklessly moved the life lines of Kennedy which tether his platform to the Snowbowl trench machine below. Two supporters (shown in photo) locked down to equipment to protect him and were arrested. 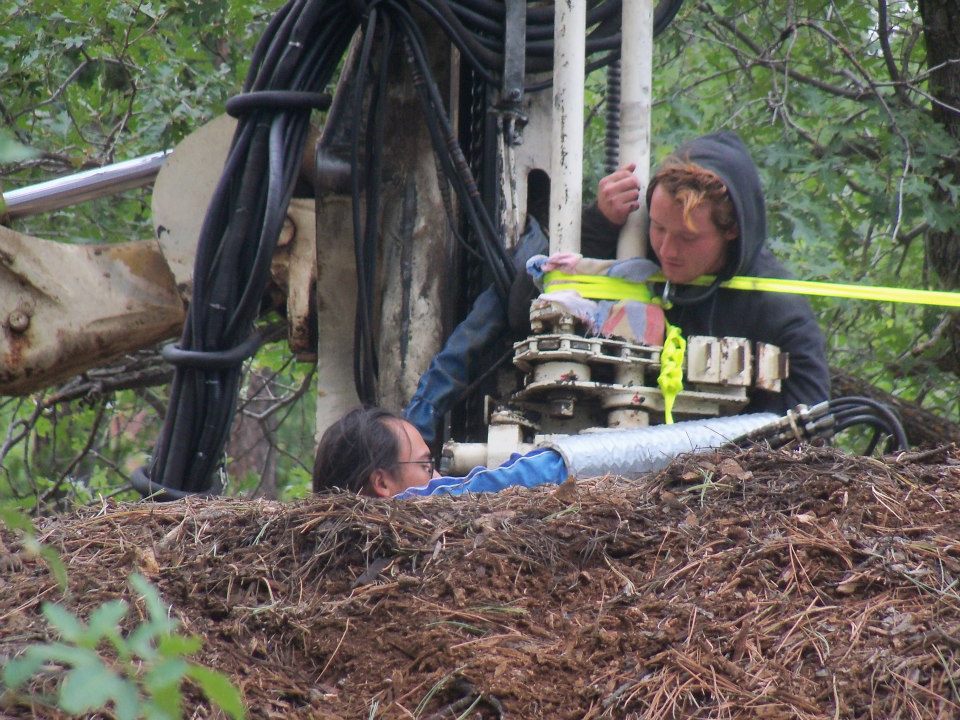 Tree sitter Kennedy sent a message Wednesday morning from the Ponderosa Pine where he remains.
"The city of Flagstaff chose to risk my life to ensure corporate access to community water that still poses a public health threat. The platform rocked and swayed as the lifelines were reset and I was unharnessed, but I am still here and will continue to work for community access to clean water. I urge everyone to take action for safe and healthy communities.”
The two supporters were arraigned at municipal court in Flagstaff on Wednesday morning, as the tree sit continued and more actions were planned.
Liza Minno Bloom, a supporter on the ground at the tree-sit, said Tuesday evening, “Thank you to Eric and Alex who placed readily available bicycle u-locks around their necks and connected them to Snowbowl's pipeline trench machine. They acted quickly to prevent reckless Snowbowl workers and law enforcement officials from further threatening James' life. So many people have come out today offering support and have called the Flagstaff City Council urging them to ensure no one's safety is compromised, they cannot ignore our concerns."
San Francisco Peaks is sacred to 13 area Indian Nations, including the Navajo Nation, Havasupai, Hualapai, Hopi and Zuni Pueblo, who are struggling to defend the sacred mountain where herbs are gathered for healing and medicine men conduct ceremonies.
Protect the Peaks issued this statement Tuesday night: 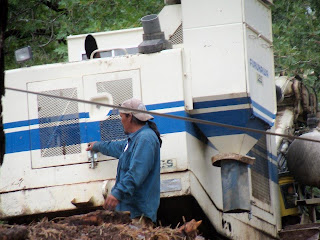 Tree-sitter James Kennedy watched from 80 feet above as two supporters, who had locked themselves to Snowbowl pipeline equipment to protect James' "lifeline", were arrested. At 7:00 am, Snowbowl workers began recklessly moving the line that tethers Snowbowl equipment to the tree-sit platform.
"Two supporters, Eric and Alex, have locked down on heavy construction equipment, where my lifeline is anchored," stated James Kennedy, a student at Northern Arizona University. "They did this after police and Snowbowl employees alongside Police Chief Treadway said they would attempt a dangerous relocation of my lifeline. I am NOT harnessed into the platform or tree. any movement will send me falling nearly 80 feet."
At 1:00 pm both supporters were arrested by Flagstaff Police. The two community members who were arrested face trespassing charges. Donations can be made for jail support at: www.protectthepeaks.org
At 4:00 pm James started rain-proofing the tree-sit platform in preparation for his second night in the path of Snowbowl's wastewater pipeline. "Thank you to Eric and Alex who placed readily available bicycle u-locks around their necks and connected them to Snowbowl's pipeline trench machine. They acted quickly to prevent reckless Snowbowl workers and law enforcement officials from further threatening James' life," stated, Liza Minno Bloom, a supporter on the ground at the tree-sit, "So many people have come out today offering support and have called the Flagstaff City Council urging them to ensure no one's safety is compromised, they cannot ignore our concerns." 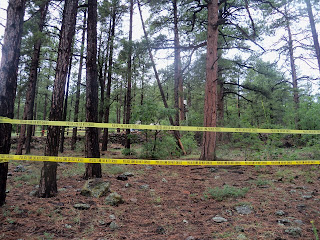 A rally and march was held tonight starting at Flagstaff City Hall at 5:00 pm. Community members walked through Thorpe Park to the nearby tree-sit site to rally, drum, sing, and express support for the tree-sitter defending public health and the Peaks.
The tree-sit was initiated yesterday to block construction of pipeline that would transport 180 million gallons of sewage effluent from the City of Flagstaff to Arizona Snowbowl for snowmaking on the San Francisco Peaks. Arizona Snowbowl would be the only ski area in the world to use 100% wastewater for snowmaking. The treated sewage effluent has been proven to contain pharmaceuticals and hormones and more recently to contain Antibacterial Resistant Genes.
The San Francisco Peaks are considered an ecological island and held holy by more than 13 Indigenous Nations.
We invite those of you who believe in the safety and health of our children, the sanctity of our environment, and the protection of public water to demand that:
- The City of Flagstaff rescind the wastewater contract with Snowbowl!
- An immediate moratorium on the City of Flagstaff’s use of treated sewage effluent in public spaces where any person may come in contact with reclaimed wastewater, until new research and technology is available to mitigate long-term environmental and community health risks.
-The use of public water in this desert climate of Flagstaff with only a projected 25-38 years of water left for people’s consumption, should be cleaned and used for people to drink, not for a private corporation to make a profit.
-President Obama fulfill campaign promises to protect human rights and sacred sites.
On Monday, Protect the Peaks released this statement:
Flagstaff, Ariz. - This morning we erected a tree-sit to protect our community and our children from the City of Flagstaff’s sanctioning and use of hazardous treated sewage, which contains antibiotic resistant genes, in our public spaces. The ropes securing this tree-sit stretch across the projected path of the City of Flagstaff’s and Arizona Snowbowl Ski Resort's treated sewage effluent pipeline, currently under construction on Mars Hill near Thorpe Park.
After years of construction delays, court challenges, and resistance from community members, a 14-mile sewage pipeline that Snowbowl would like to see carrying millions of gallons of treated sewage effluent yearly from the City of Flagstaff to Snowbowl is near completion. Snowmaking is scheduled to begin at the end of November, when a combination of pharmaceutical, industrial, commercial, and household discharge will be sprayed from snow machines onto the San Francisco Peaks.
“If they choose to continue construction, they must publicly account for my life among the diversity of human and non-human beings their ecocide threatens.” said James Kennedy, the NAU student who currently sits atop the more than 75ft tall ponderosa pine tree. “For the purity of our water, for the safety of our community, and for the health of a fragile alpine ecosystem, we must halt this pipeline!”
Xander Vautrin, an on the ground supporter of the tree-sit believes “The City of Flagstaff, the Forest Service, and the Snowbowl Corporation are recklessly disregarding the safety of the greater public, of wildlife, our water and our environment by refusing to consider the long-term impact of exposure to wastewater. “
Recently published research conducted on treated sewage effluent in Flagstaff has found antibiotic resistant bacteria after completion of the treatment process. Though reduced by treatment, the bacteria “dramatically rebounded at the point of use.”1 This pipeline constitutes an urgent public health risk, as antibiotic resistance renders modern drugs ineffective against dangerous bacterial infections. This threatens the life of those in our community already at risk: the elderly, the sick, and the very young.
Additional research recently published in the Flagstaff Noise demonstrated a clear danger to plant life irrigated with wastewater, illustrating a serious threat to Groundsel, an endangered plant found only on the San Francisco Peaks.
“All water is connected. It is illogical and dangerous to believe that the effects of antibiotics, contraceptive hormones, industrial contaminants, and microbial pathogens —all found in Flagstaff’s treated sewage effluent—will be limited to a few runs on Snowbowl or to the Lowell Observatory grounds,” stated Derek Minnobloom another on-the-ground supporter of the tree-sit.
“Our public officials have failed all of us - not only to ensure our public safety, a clean healthy future for our water and our children - but also to protect the rights of indigenous peoples whose land we’re on,” stated Ariana Sauer, a volunteer with ProtectThePeaks.org and a tree-sit supporter. “This action is in solidarity with the thirteen indigenous nations who hold this mountain sacred.”
Photos and updates at www.bsnorrell.blogspot.com
at August 22, 2012 No comments: