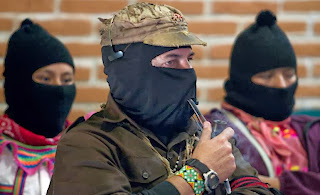 As for the Zapatistas’ refusal to admit the press to the 20th anniversary celebrations, Marcos asks, “What have they done to make being a member of the media become a source of pride which doesn’t come at the expense of the loss of the freedom or the life of being honest?  Can they say that their work is more respected by those who govern or are governed than it was 20 years ago?  What have they done against the imposed or tolerated censorship?  Can they say that their readers or listeners or viewers are better informed than they were 20 years ago?  Can they say they have more credibility than 20 years ago?” http://www.latintimes.com/subcomandante-marcos-reflects-20th-anniversary-zapatista-rebellion-new-communique-141300#.UsRv6ynd0ao.twitter
at January 01, 2014 No comments: 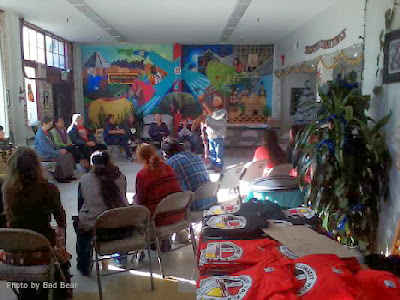 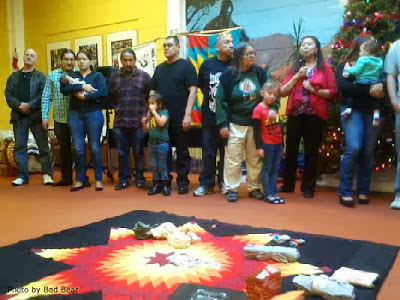 Photos by Carl 'Bad Bear' Sampson. The Longest Walk 4 Return to Alcatraz walked onto Alcatraz Island after a five month trek across this land. Bill Wahpepah was honored at the culmination of the walk at the Intertribal Friendship House in Oakland.
More photos by Bad Bear at Alcatraz http://www.bsnorrell.blogspot.com/2013/12/bad-bears-photos-longest-walk-4-arrives.html
at January 01, 2014 No comments:

The story of the executions in Mankato, Minnesota that would be the final chapter of the Dakota War of 1862 seems to always miss the mark, at least for me.

Thirty-eight Dakota men hanged the day after Christmas on an execution order signed by Abraham Lincoln has been characterized many ways even as this story, hidden from American history, began to gain attention leading up to the 150th anniversary last year. But, to be clear, most of this awareness is still only among a very small number of us.

MNN. January 1, 2014.  The natural calendar was usurpt and replaced with a corporate artificial one! Our calendar tied us our mother earth in the natural cycles of 13 moons and 28 days. To perfect the “divide and conquer” strategy, the Vatican had to first separate the people from natural time. In 1634 the new world order began. Natural thinking and the earth had to be enslaved mentally and physically.