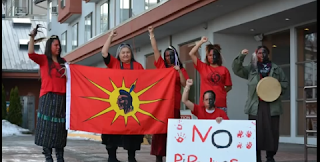 Published on Jan 14, 2014
Their opposition is to the Kinder Morgan Trans Mountain Pipeline proposing to cut through the heart of their Secwepemc Nation, crossing countless clean rivers, creeks and streams, carrying 890,000 barrels of crude oil per day, coming from the controversial Alberta Tar Sands. No Pipelines! No Surrender! No Compromise! This unceded Secwepemc and we speak for our Sacred Water! Our land is not for sale!

Mi’kmaq Delegation from the Mi’kmaq Nation and Elsipogtog fracking land dispute on the east coast are touring BC to raise awareness about their struggle against fracking, their ongoing assertion and exercise of nationhood and the repression they face from police, courts, government and corporations.Neskonlith event:
Giibwanisi Dizhnikaaz, will be speaking at Neskonith to raise awareness of ACTION (Anishnabek Confederacy To Invoke Our Nationhood) and Oshkimaadiziig Unity Camp, which is a land reclamation in their Anishnabek Nation in the so-called Awenda Ontario Provincial Park.
http://oshkimaadziig.org/
Everyone is Welcome to Attend. See you at this very informative event to learn and to honor some of our land defenders.
Monday, January 27, 2014 4:00pm until 8:00pm
Neskonlith, unceded Secwepemc Nation
Neskonlith Hall, 5 km west of Chase
Dinner will be served at 4 pm
Presentation by Guests
Honoring and Hand drumming