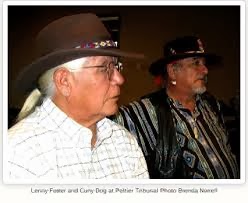 "They haven't broken his will or broken his spirit. He remains very positive and very strong. Today's visit made him very strong again." Lenny Foster speaking of Leonard Peltier.

Foster, Dine' and member of the American Indian Movement, is program supervisor for the Navajo Nation Corrections Project, which provides counseling for Native American inmates in state and federal prisons. Foster has done this work for 32 years, serving as Peltier's spiritual adviser for 27 years.

Foster described Anaya's reaction after the meeting with Peltier. "He was very moved and impressed, and he said it was an honor to spend four hours with Leonard, talking with him about his case."

Peltier asked Anaya, professor of law at the University of Arizona in Tucson, about the conditions of Indigenous Peoples throughout the world.

Gonzales pointed out that Peltier has been incarcerated for 38 years, and yet Peltier's concern is still with Indigenous Peoples around the world. Gonzales said, Peltier "wants to know how his brothers and sisters are around the world. I really felt that sincerity in him."

Gonzales said Peltier is a "a Mandela for us."

When asked about Peltier's health, Foster said, "Today he looked in very good spirits and was very happy and very moved by the presence of Mr. Anaya visiting him." However, Foster said that Peltier is suffering from diabetes and he is not in good health.

Foster said Peltier needs to be free and sent home to spend his remaining years with his children, grandchildren and great-grandchildren, and to be among his people.

"They haven't broken his will or broken his spirit. He remains very positive and very strong. Today's visit made him very strong again," Foster said.

On the radio program, Foster also described the reign of terror in the US when the people stood up against the BIA and the GOONs on Pine Ridge in South Dakota. Foster describes how the GOONs terrorized Indian people. "They went against their own people."

"It was a civil war." Foster said in later years, however, the GOONs realized what they were doing was wrong.

Foster also describes a recent reunion in South Dakota with some of the warriors from Wounded Knee.

David Hill, director of the Leonard Peltier Defense Offense Committee, joined Anaya and Foster in the meeting with Peltier.

Listen to the audio above for more comments from Foster and Gonzales.

During the Rights of Nature Tribunal on January 17, 2014, in Quito, Ecuador, eight cases were heard as 400 representatives gathered from around the world. Pachamama Alliance reports that Ecuador is abandoning its high standards:

It is fitting that the Tribunal on the Rights of Nature was founded in Ecuador, the first country to have adopted this legal doctrine in its constitution. It is ironic that Ecuador is abandoning its leadership and failing to respect its own constitution. The Ecuadorian government is currently promoting large-scale oil and mining operations that put at risk some three million hectares of its remaining Amazon rainforests while engaging in a systematic crack down on activists and organizations who are defending the rights of Mother Earth.
During his passionate argument for admitting the Yasuni-ITT case, Alberto Acosta asked the Tribunal to establish a special chamber for the immediate processing of two cases: the Yasuní-ITT and the defenders of Rights of Nature, given urgent threats facing activists who are collecting signatures for a national referendum on the Yasuni-ITT. Additionally, he asked the Tribunal to demand the suspension of all oil exploitation activities in block 31 and in ITT block and called for a comprehensive audit of the exploitation activities underway.
“I condemn the actions of Chevron and BP and I stand with those indigenous communities who have won their case against Chevron,” said Vandana Shiva. “I ask Ecuador’s President and the National Assembly to not give up the vision, the dream of Yasuni. Everyone can drill, but Ecuador would dream bold by having the rights of nature in its constitution and creating the vision of Yasuni ITT.” In closing, Dr. Shiva called for the cases that were admitted by the Tribunal “to be deepened until the rights of Mother Earth become the framework for governing our lives.”
Read more: http://www.pachamama.org/news/latest-on-the-first-international-tribunal-on-rights-of-nature#sthash.lPONFw86.dpuf
at January 25, 2014 No comments: