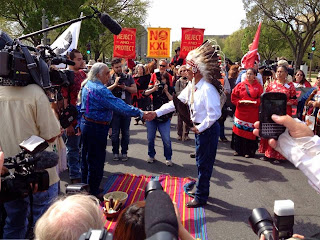 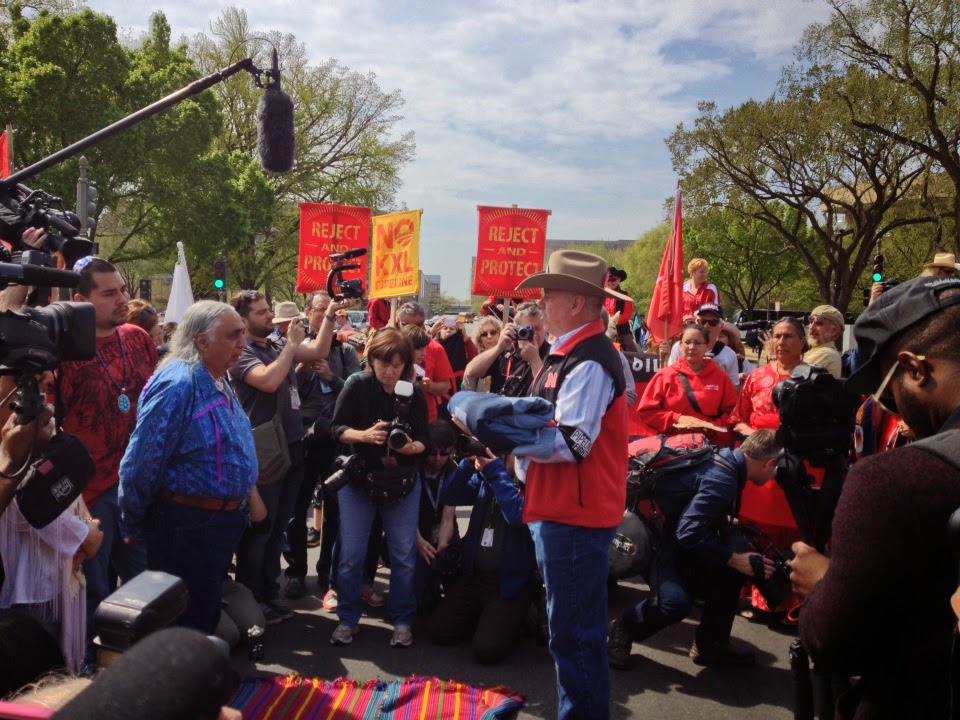 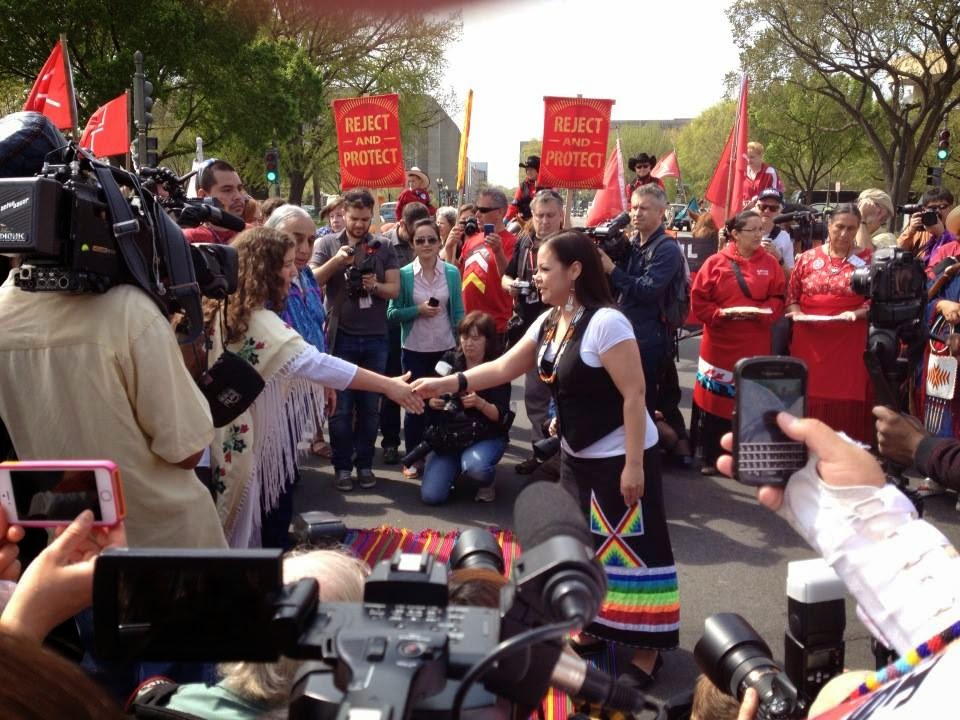 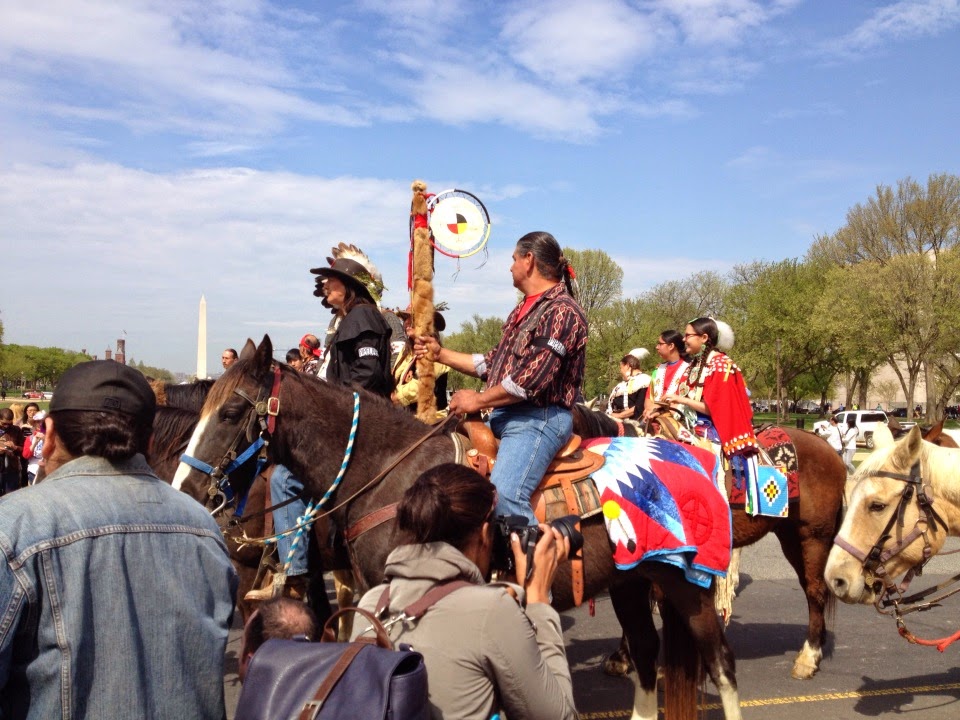 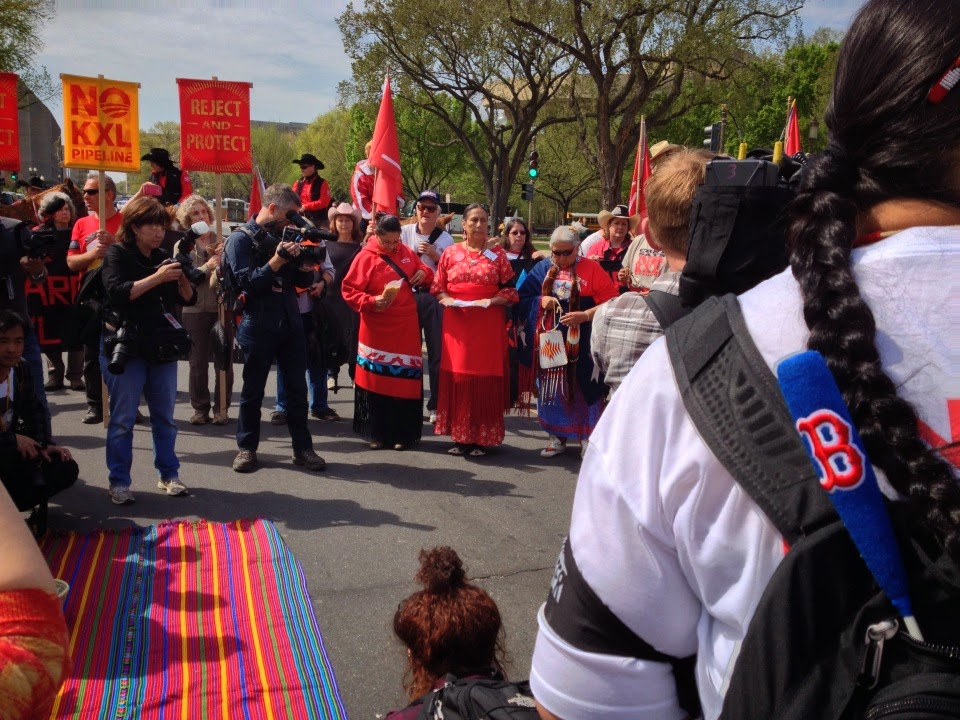 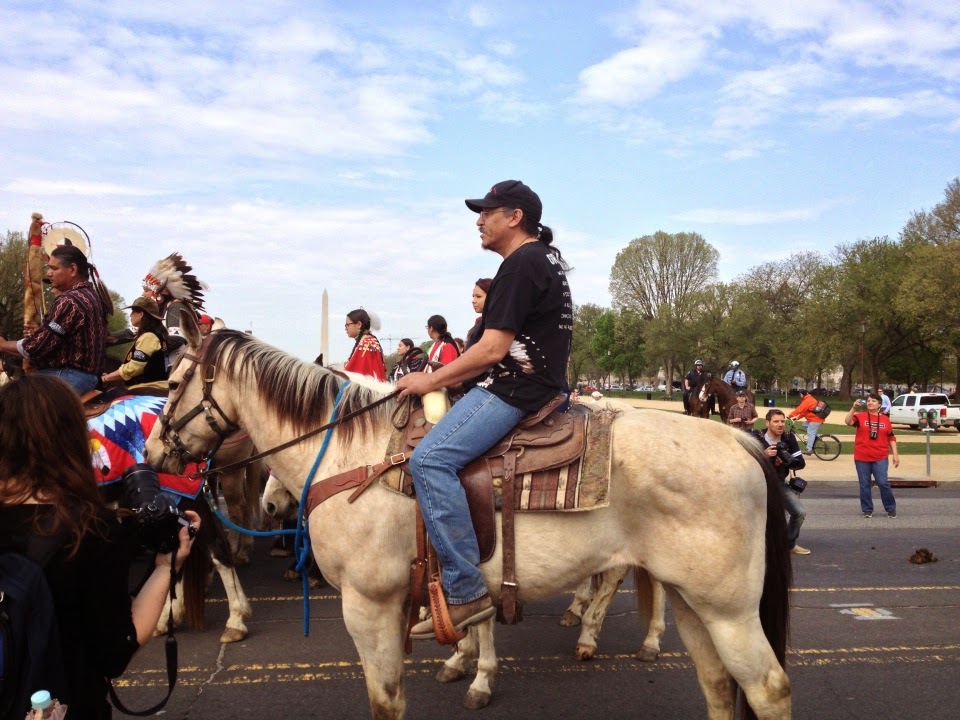 Photos by Marvel Handboy, thank you for sharing with Censored News!
Cowboy and Indian Alliance in Washington DC uniting, and resisting against the Keystone XL tarsands pipeline.

Faith Spotted Eagle: Women are nurturers, but they are also Mother Bears, ready to defend the land and water 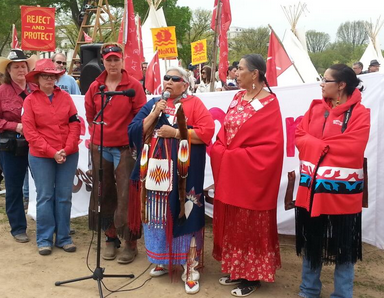 WASHINGTON DC -- Faith Spotted Eagle, Ihanktonwan Oyate (Yankton Dakota) told the ‘Reject and Protect’ action resisting the Keystone XL tarsands pipeline today in DC that Indian women are ready to protect their land from the proposed invasion of the Keystone XL pipeline and violence of the man camps in the Dakotas.

"With that Treaty, we mean business."

During the action on the National Mall, she also spoke on the role of the Buffalo Robes and Star Quilts for honoring people. She was joined by Casey Camp-Horinek, Ponca from Oklahoma.

Spotted Eagle said the backbone of the nation is the women. They are the co-creators. The role of women is that of life givers, a role that requires women to be humble.

"We have to be very humble about that because we also bring life. We have to walk in that way of remembrance."

“We have a responsibility but we also turn into Mother Bear.”

“We stand here as Mother Bears to defend our land, our farms, our ranches, our treaty territory. They are violating our treaty land and our treaty water."

"We have come here to say 'Enough is Enough.' We are not going to let TransCanada pass our treaty land.”

Spotted Eagle said the ‘man camps’ of oil crews are bringing increased violence to Indian Nations. One out of three Yankton women have been sexually assaulted by non-Indians, she said.

Now, Native Spiritual Camps are going up along the proposed TransCanada route to defend and protect.

On April 24, 2014, in Sables bitumineux/Oléoduc Keystone XL, by Chris P 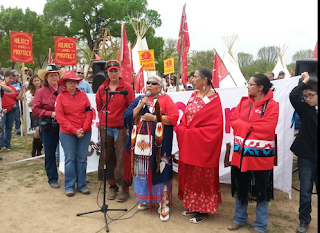 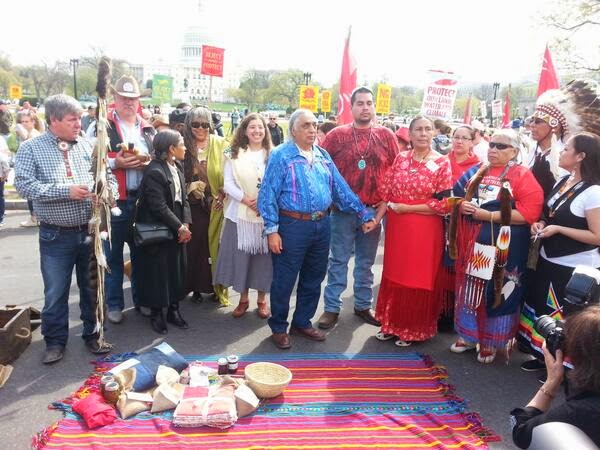 Mohawk Nation News
Please post and distribute.
MNN. Apr. 22, 2014. We gave our word to our prophet Dekanawida that we would spread the peace throughout the world. Another international peace conference to spread the Great Peace is coming soon like the one we had in London in 1710. In the Great Peace women have a duty to intervene in all conflicts of other nations to stop or prevent the spilling of the blood of their people. Jigosaseh, the Mother of Nations, brought peace in Mohawk country. All “Women are the progenitors of the Nation”. W44. They create the children and are half the population of the world. We must assert our natural power to create peace by asserting our responsibility to consider all matters first and reaching a consensus. We will then inform our men of our decision.

Queen Anne’s Court listens to our chiefs describe The Great Peace 1710.
The power of the people is vested in our community and our consensual decision making process. Our communities override all corporate authoritarian bodies. We can quickly spread peace as Jigosaseh did among the Rotino’shonni:onwe.
We women can bring a nation into the Great Peace by persuasion. No war can be called until we have tried three times to reach a peaceful solution. We can declare the war, appoint the warriors and negotiate the peace that follows.
The peace was blocked on Great Turtle Island with the European orchestrated American Revolutionary War 70 years after the first International Great Peace Conference in London in 1710. The US constitution of war was based upon some principles of the Constitution of Peace but the Council of Women was removed. They were replaced with an all male Senate. A hierarchical president was placed overall so that banker wars would always continue.

Women everywhere beat down the enemies of freedom.

Women throughout the world must now take their proper place in the consensus process within their communities. When Jigosaseh instituted the first council of women in her community, it spread throughout the Mohawk Nation and then quickly to the other Ongwehonwe communities.
Europeans owned their women. The European paternalistic oligarchs did not want their women to have powerful roles as described in the Kaianerekowa/Great Law. In their hierarchical model the man was the head of the family. The colonists created the Christian-based Handsome Lake Code to conquer the Rotinoshonnionwe.
The belts our chiefs took to Europe are hidden. The belts given to Peter the Great of Russia in 1710 have been located. This confirms the world’s first international peace conference occurred in 1710 in London at our instigation.
Like the Ongwehonwe, Russians love their Mother. At the 1710 male dominated monarchs did not accept sharing equal power with the women and set aside our message. Now the time has come to hear the message. The one you have been waiting for is yourself. With unity of mind comes great power. With that power comes the peace. 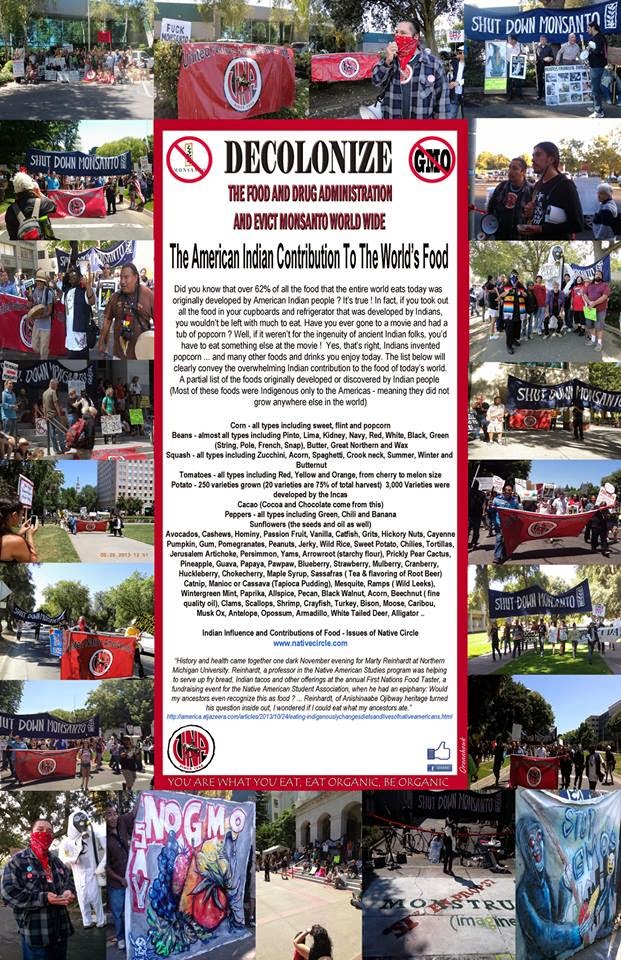 SACRAMENTO -- Hearing on SB 1381 to Label GMOs IN THE SENATE JUDICIARY COMMITTEE ON TUESDAY, APRIL 22YOUR VOICE AND PRESENCE MATTER! Join us at the hearing on SB 1381 to Label GMOs, IN THE SENATE JUDICIARY COMMITTEE ON TUESDAY, APRIL 22, AT 1:30 pm in CAPITOL ROOM 112.
There is a parking garage near the intersection of 10th and L Streets.
If you can’t make the hearing, you can listen to the hearing http://assembly.ca.gov/listentorooms and read bill here:http://sjud.senate.ca.gov/agenda.
MEASURES WILL BE HEARD IN FILE ORDER
S.B. No. 893 Hill. Hill. Automated license plate recognition systems: use of data
S.B. No. 894 Corbett. Residential care facilities for the elderly: revocation of license.
S.B. No. 968 Hill. Public lands: Martin's Beach access
S.B. No. 1072 Fuller. Real property: duty of care: recreational purposes: aviation activities.
S.B. No. 1099 Steinberg. Dependent children: sibling visitation.
S.B. No. 1190 Jackson. Courts: judgeships.
S.B. No. 1256 Mitchell. Medical services: credit.
S.B. No. 1348 DeSaulnier. Online data brokers: sale of personal information
S.B. No. 1356 Lieu. Counterfeit goods: abatement: nonresidential premises.
S.B. No. 1381 Evans. Food labeling: genetically engineered food.
After you contact your own Senator in Sacramento to ask for support, immediately contact the members of the Senate Judiciary Committee letting them know you support the bill: For letters of support– Email by: NOON April 15, 2014!

“I support this bill to label GE food. Thank you to Senator Evans, for authoring SB 1381 supporting our Right to Choose our foods." ...or your own words.

D. Minority Consultant (analyzing the bill for the Minority (Republican) side of Senate): Mike Peterson: mike.petersen@sen.ca.gov 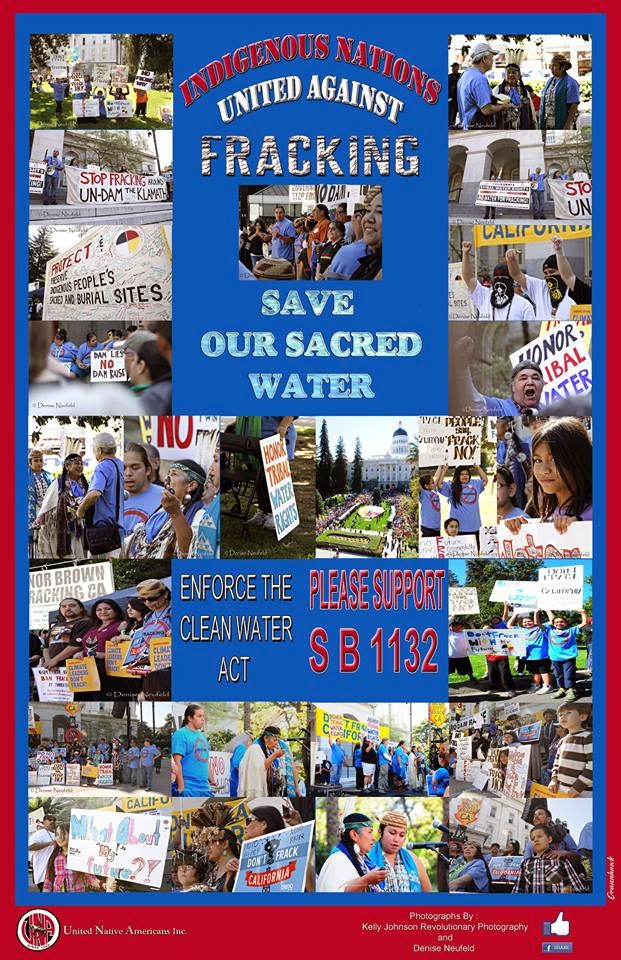 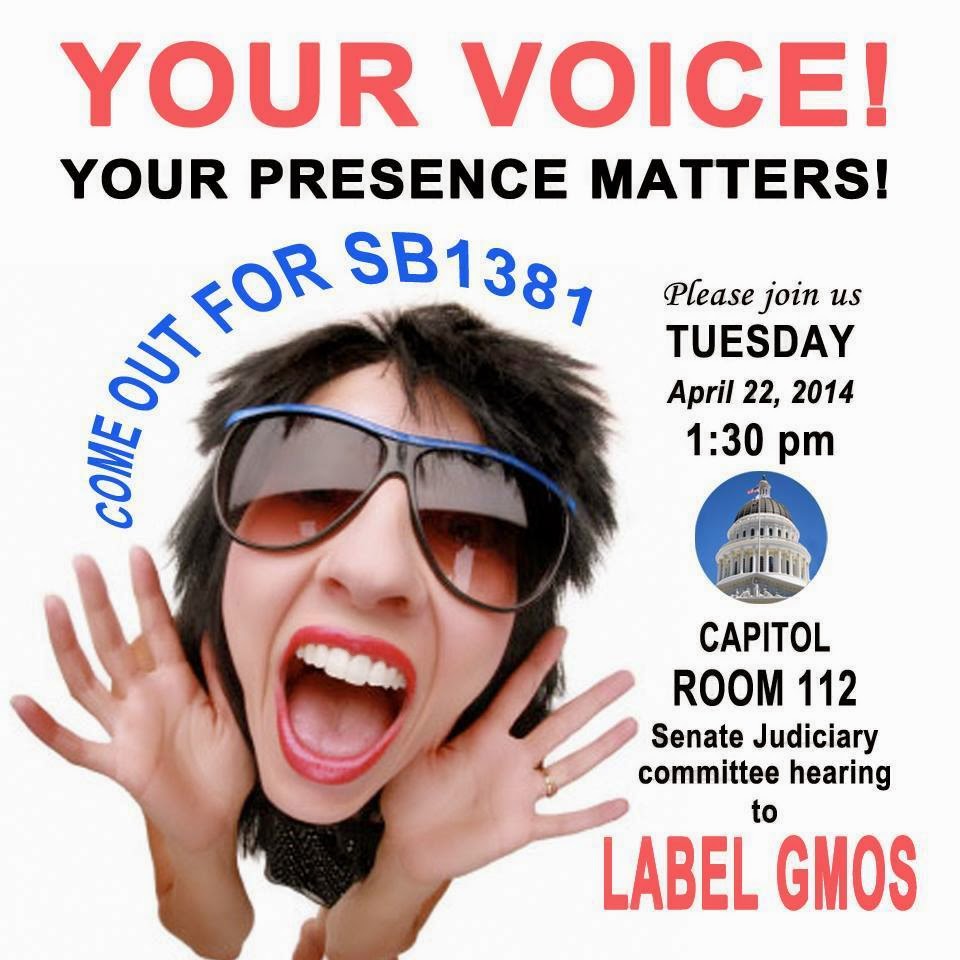 On April 8 the Senate Natural Resources Committee voted to pass SB 1132, a bill to halt fracking in California. We packed the hearing room to show support for the bill - let's do it again at the next hearing.What: Senate Committee on Environmental Quality hearing on the fracking moratorium billWhen: Wednesday, April 30, 9:30 AM
Where: Room 3191, California State Capitol Building, Sacramento, CA

Please fill out this form if you plan to attend: https://docs.google.com/forms/d/1Hxnjlo8lQ_Km-MaamxJXr_fNFWNzcnPAWfDVHqRJ8Wg/edit

Feel free to post questions on the event page! See you in Sacramento!

Questions or comments can also be sent directly to Hillary at haidun@biologicaldiversity.org. 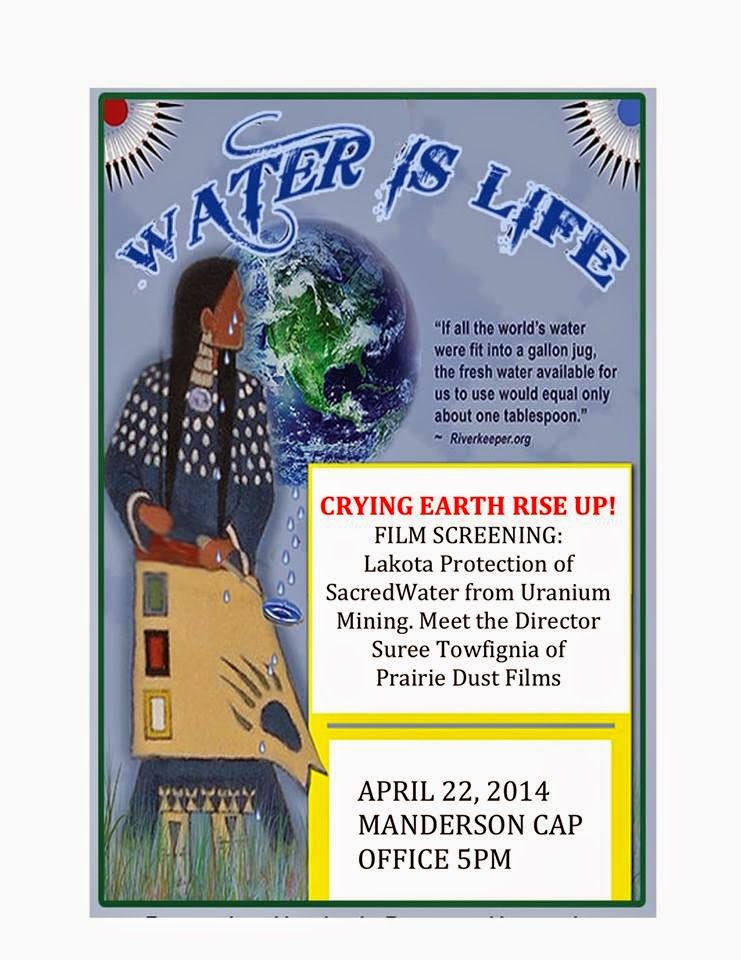