"Pope Francis in no more a Christian than was Pope Alexander VI ... To criminalize the landowners and to bestow blessings on the thieves is deeply Satanic ... Stolen property should be returned. It’s the rule of law. Treaties should be enforced." Steve Melendez, Pyramid Lake Paiute, President American Indian Genocide Museum 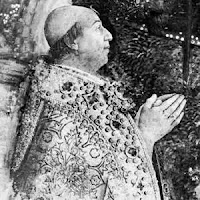 In the year 1501 the Master of Ceremonies of the Vatican, Johann Burchard, wrote in his secret diary, “On Sunday evening, October 30th, Don Cesare Borgia gave a supper in his apartment in the apostolic palace, with fifty decent prostitutes or courtesans in attendance, who after the meal danced with the servants and others there, first fully dressed and then naked."

"Following the supper too, lampstands holding lighted candles were placed on the floor and chestnuts strewn about, which the prostitutes, naked and on their hands and knees, had to pick up as they crawled in and out amongst the lampstands. The pope, Don Cesare, and Donna Lucrezia were all present to watch. Finally, prizes were offered—silken doublets, pairs of shoes, hats and other garments—for those men who were most successful with the prostitutes. This performance was carried out in the Sala Reale and those who attended said that in fact the prizes were presented to those who won the contest.”

As strange as it may seem, Rodigo Borgia (Pope Alexander Vl) is not remembered for his debauchery or incest but for issuing a bull (a decree from the Pope) which drew a line from the north pole to the south pole which gave most of the Americas to Spain and a slice of Brazil to Portugal.
The licentiousness of Rodrigo Borgia was well known at the time. As a Cardinal, he received a reprimand from Pope Pius II, written in his own hand in June of 1460.

“We have heard that three days ago a number of Sienese women were gathered together in the gardens of Giovanni Bichi and that you, forgetful of your high office, were with them from one o’clock until six in the afternoon.  Your companion was one of your colleagues whose age, if not his respect for the apostolic see, should have reminded him of his duties. We have been informed that there was unseemly dancing, that no amorous allurements were lacking, and that you conducted yourself in a wholly worldly manner. Decency forbids us to go into the detail of what happened, for they were things whose very names are unworthy of your rank. The husbands, fathers, brothers and other kinsmen who had accompanied the girls were forbidden entrance so that you and a few of your intimates could be more free to indulge your pleasures. They say that in Siena this is the main topic of conversation and everyone is laughing at your vanity…We leave it to you to judge whether paying court to girls, dispatching fruit and delicate wines to the woman of your choice, spending the whole day watching every kind of folly and finally sending away the husbands so as to have all freedom for yourself, are compatible with yours dignity. We are blamed on your account, and your late uncle Callixtus is blamed too for entrusting you with so many offices and honours…Remember your dignity and do not try to win the reputation of a vain gallant among men and girls…Here at Bignio there are many ecclesiastics and laymen among whom you have become a byword…”

Many people in this country believe that America was founded a “Christian Nation” but no one can disagree that there was nothing “Christian” about Pope Alexander VI.

From the genocide that Columbus committed on the natives on the island of Haiti to the government’s refusal to honor treaties with the Indians, it is all traced back to this licentious, incestuous, pervert, Pope Alexander VI.  As we shall see, all history since Christ is filled with men who profess to be Christians when they are not.  It is the Catholic Church that is most responsible for the hijacking of Christianity. Spaniard, Rodrigo Borgia’s papal Bull ‘Inter Caetera” issued May 4, 1493, was the basis for the Doctrine of Discovery which is written into American law. Black’s Law Dictionary defines “Discovery” as, “The foundation for a claim of national ownership or sovereignty, discovery is the finding of a country, continent, or island previously unknown, or previously known only to its uncivilized inhabitants.

That a  Spanish Pope could give the Americas away to Spain and Portugal is land theft on a Continental  scale. To criminalize the landowners and to bestow blessings on the thieves is deeply Satanic.

Today, Pope Francis’s addressed a joint session of the United States Congress. Speaking of Americas’ historic wrongs to the Indigenous people shows that Pope Francis in no more a Christian than was  Pope Alexander VI.  He said, “Tragically, the rights of those who were here long before us were not always respected.  For those peoples and their nations, from the heart of American democracy, I wish to reaffirm my highest esteem and appreciation. Those first contacts were often turbulent and violent, but it is difficult to judge the past by the criteria of the present.”

The Anti-Christ is someone who opposes or takes the place of Jesus Christ and the Catholic Church does exactly that!  If the Holy Spirit was in either of these men then they would know that the “criteria” of the Bible never changes. Right and wrong never change. Stolen property should be returned. It’s the rule of law. Treaties should be enforced. It’s the law. Unjust laws should be condemned. It is the righteous thing to do.
Website: http://www.aigenom.com

I would visit an "American Indian Genocide Museum" if I could. This is one story that nearly NO ONE even knows about in this country.

I don't think the current Pope is anything like the Borgia Pope... except that they both got to be Pope. But the power that Popes had to make decisions like the one that divided South America into the Spanish part and the Portuguese part needs to be understood by people who have to deal with the outcome of that decision TODAY... and to understand how important it is to maintain and support all the indigenous cultures- and Languages- in the Western hemisphere. Every one of those languages is a way of understanding our world from a cultural perspective that is just as valid as any other... and MORE valid than one that has come and changed the names of places to 'honor' people who never even SAW or knew of the things and places named for them. Local native cultural names for places-- the rivers, mountains, prairies and other physical locations-- should be restored. ^..^