NaBahe Katenay Keediniihii
SheepDogNation Media
September 4, 2015 – Late summer and early fall 2015, Big Mountain keep vigil for BIA – Hopi Law and Ranger threats, a resistance that is quite dynamic in terms of the hardships of accepting losses and the spirited-will to maintain defiance.
Elders Mary Lou and Clarence Blackrock are both 90 years old, along with their children and grandchildren, were all well prepared in fall 2014 for the threats of livestock confiscation. They maintained vigil throughout the nights for that predawn police raid, but their animals were saved. Just this past August and after the BIA – Hopi rangers’ assessment, the elder couple decided that rather than facing a greater loss, they chose to give away a major portion of the herd to their children and other relatives. Their grandson, Gerald, who has been the only herder was upset but he knew he cannot go against whatever decision his grandparents made.
As of this date, there has been no new reports about the threat of confiscation that was made to elder resister, Rena Lane. In any dealings with law enforcement during a time of siege or protest, police tend to set a mode of diversion and anxiety and by their own determined (perfect) time, they will initiate force actions. However, Rena and her family can still expect that invasion and not having any physical presence of witnesses or herders, the animals might be taken any moment. This will put things back as it were in fall of 2014, someone getting arrested and hoping funds can be raised to pay off the U.S. BIA and their agents.
Inspiring things did occurred and a sense of defiance remain, a herd of cattle were put into hiding and the late Pauline Whitesinger’s herds still defy the BIA’s monitoring. The bravery and magnitude of will that two local Big Mountain Dineh carried out were perhaps very small but in a universal aspect, it adds to that hope for peace and liberation.
One of the grandsons from the local communities rode his horse about 8 miles to another elders’ homestead, and with the approval of the two, widowed elder ladies, the cattle were driven into one of the nearby canyons. Despite the saturated grounds from the heavy rains, this one particular young man on horseback, left the cattle herd deep inside the canyon where there was plenty of “illegal” grazing and water. The young man returned a day later to check, and he noticed that the BIA Hopi rangers attempted to follow the cattle hoof tracks, but the impassable dirt roads made them turn around. However, these elder ladies’ cattle are still under threat.
The late Pauline Whitesinger’s small sheep herd remain “at large,” we the on-land resistance coordinators and supporters sometimes do not know where this grandson-herder has the sheep. We keep wishing that this determined grandson get more support even though he seems very self-sufficient. He does need some means of communication like a cell phone and remote solar charging equipment. He also needs a better bicycle like a sturdy mountain bike.
Need for continued support means to truly and spiritually put your thoughts into coming out to this remote place where a few of the last, tough and land-based indigenous elders still try to survive. Put yourself into that willingness to de-colonize and acquire some knowledge aboutsustainable practices instead of just chanting (such words) in a protest picket line. Prepare yourself, logistically even though your preference of foods may run out, accepting to drink the waters provided there, the wacky seasons of climate change, no cell phone reception, no electricity, but know that nature and the bright clear night sky will embrace you with godly admiration. Contact us, if you can provide any resources or logistics mentioned or that are needed in a struggle like this. I'll refer your inquiry to other network facilitators, too, since we function on a collective basis.
The world just need to realize that even though this is a small group of Indians defying American colonialism in a remote place, there has to be a demand for justice and that the U.S. policy of uprooting culture and religion for fossil fuel extraction demonstrate a gross violation of international human rights. On behalf of the few remaining Dineh elders and youths, we urgently asked for your input, solidarity and volunteer time for on-land support.
Thank you for reading and your time.
~(NaBahe Katenay Keediniihii) – SheepDogNation Media 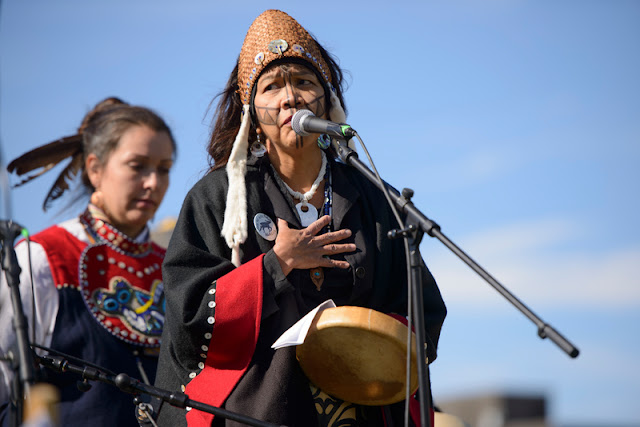 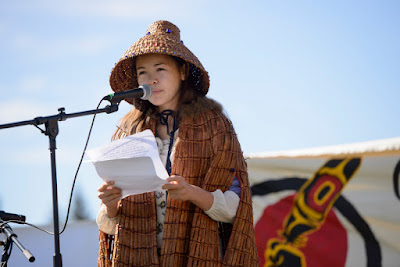 Ta'Kaiya Blaney of Vancouver speaks at the "Rally to Confront the Glacial Pace of Political Action" as President Obama meets with ministers from around the world for the "GLACIER" conference at the nearby Dena'ina Civic and Convention Center. 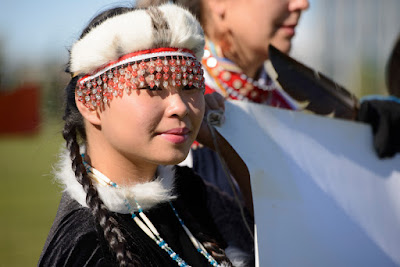 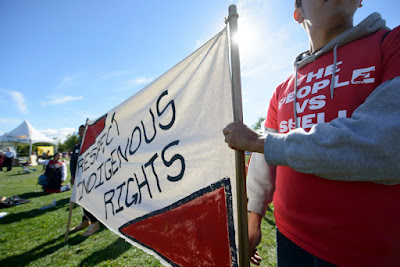 As President Obama visited Alaska this week, spending time in communities impacted by climate change and giving a powerful speech on the urgency of the issue, demonstrators greeted the president by protesting his recent approval of Shell’s Arctic drilling plans.
Hundreds of people rallied in Anchorage as President Obama spoke at the GLACIER conference, a ministerial meeting hosted by the State Department. Speakers from organizations around the state spoke at the rally — called the Rally to Confront the Glacial Pace of Political Action — including the Alaska NAACP, RedOil, Interfaith Climate Action Group, BAYAN Alliance, Unite Here Local 878, and Idle No More, as well as many individual speakers and activists.
The speakers, performers, and activists at the rally emphasized what they see as the President’s deeply hypocritical move to come to their state to highlight climate change immediately after he gave Shell approval to drill in the Arctic ocean. Seattle and Portland, the sites of two major protests against Shell’s Arctic drilling, held solidarity rallies as well.
Several protesters followed the president the next day as he traveled to the town of Seward where he visited receding glaciers.
More photos: http://www.greenpeace.org/usa/photos-hundreds-protest-arctic-drilling-during-president-obamas-alaska-visit/?utm_source=twitter&utm_medium=09032015tweet&utm_campaign=savethearctic

Also see:
Clear perspective from Mohawk Neddie Katsitsiaionhne
Thanks to the Mohawks, for a clear perspective. This comment on Obama in Alaska, is from Neddie Katsitsiaionhne, Mohawk.
Obama "dances with our children, all the while smiling knowing he is there to hurt them forever, the children do not know what he is or what he has planned for their own children's land water air and food and animals and natural medicines. I know some protect the children from such things but the leaders should have made an example out of him and chased him out like the strong Dine' has done to that low life form called John McCain."
Censored News: Obama's Grand Alaskan Holiday: Epic PR Fail
http://bsnorrell.blogspot.com/2015/09/obamas-grand-alaskan-holiday-epic-fail.html

Censored News: Obama can not be separated from his action

We were partners in coordinating the rally up here on Climate.  I was just notified the story ran in Censored News with the title "hundreds protest President and Arctic Drilling"  This does not reflect the event that we held.  We held the OUR CLIMATE, OUR FUTURE Rally to confront Climate Change and pressure leaders of the World and Obama for stronger actions to address Climate.  We held this rally to show Obama and the world that we in Alaska are in Climate Crisis and we need action now to address our situation.  Somehow this is being spinned into a Protest against Obama, which is inaccurate. We held a respectful RALLY to raise the profile of Climate Issues.  Can you change the title to accurately reflect the Rally.  We are respectful toward the President, although we don't agree with the offshore drilling permits in the Chukchi, we still are respectful while we keep the pressure on. Thank You, Faith

Response from Censored News: President Obama can not be separated from his action. Obama is responsible for approving the permit for Shell to drill oil in the Arctic.
The article contains actions and comments from many areas across Alaska. The title of the post is: Photos: Native People Protest Obama and Arctic Drilling Across Alaska.
Thanks for writing.

About Censored News
Censored News was created by news reporter Brenda Norrell after being censored and terminated by Indian Country Today. Norrell has been a reporter in Indian country for 33 years, beginning at the Navajo Times during the 18 years that she lived on the Navajo Nation. She was a stringer for AP and USA Today, covering the Navajo Nation and federal courts. She traveled with the Zapatistas through Mexico on trips spanning 12 years. She is now blacklisted by all the paying media. Censored News is beginning its 10th year with no advertising, grants or revenues. -- brendanorrell@gmail.com