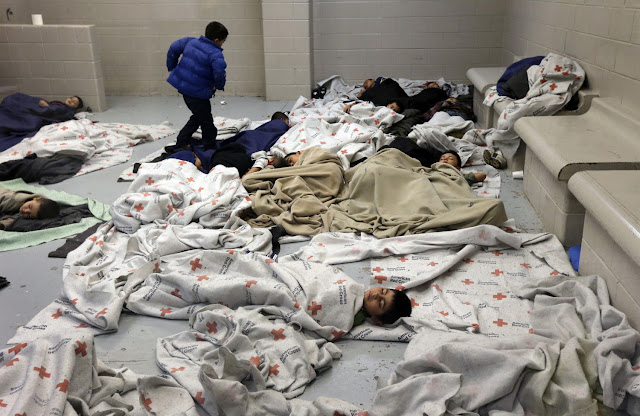 By imprisoning migrant children, in violation of international law, the United States has proven to be the world's bully, abusing children who have no one to protect them, or fight for their rights. -- Censored News
Photo: Detainees sleep in a holding cell at a US Customs and Border Protection processing facility in Brownsville, Texas. (Reuters/Eric Gay)

The United States and the United Nations refuse to protect the world's most vulnerable asset -- migrant children -- and refuse to defend its most valuable asset, its children

The United States is imprisoning children in migrant prisons, in violation of international law. The imprisonment of migrant children with adult strangers in Texas is an egregious crime against humanity. Further the State of Texas is further violating the rights of humanity by classifying migrant children's prisons as "child care facilities."

Both the Bush and Obama administrations, and the individuals responsible, should be held responsible for war crimes, and crimes against humanity.

The most recent egregious violation of human rights is the imprisonment of children with adult strangers in a private prison-for-profit in Dilley, Texas.

The prison in Dilley is operated by Corrections Corporation of America. It is one of two privately run detention centers in Texas under contract with the United States government to hold undocumented immigrant women and children.

The other unit, in Karnes City, is operated by the Geo Group. The Karnes City unit can hold about 600 people and has already been issued a state license.

These two prisons-for-profit, both CCA and GEO (formerly Wackenhut), are operating in a criminal manner.

The Texas Tribune reports, "A Travis County judge ruled Wednesday that the Texas Department of Family and Protective Services cannot license an immigration detention center as a childcare facility, giving immigrant rights groups a victory in a months-long battle with the state.

"State District Judge Karin Crump said her injunction was needed to protect the women and children being held in the 2,400-bed facility in Dilley, Texas. Crump said current licensing exceptions allow mixed gender detainees to room together and in some cases, force children to share quarters with adult strangers.

“The exceptions allow and have allowed for situations for children that are dangerous,” she said. “And this temporary injunction addresses those concerns.” Read the article: Texas: Judge blocks private prison licensing https://www.texastribune.org/2016/06/01/judge-blocks-state-licensing-detention-facility-ch/

The United States continues to act with impunity, violating international law, with mass incarceration of migrant children, and global assassinations. The United States should be held responsible for violations of the Geneva Conventions.

Further, during its Periodic Review before the United Nations in Geneva in 2015, the countries of the world made it clear that the United States practice of longterm solidarity confinement in US prisons is torture.

The countries of the world also pointed out that the United States had failed in assuring women's rights and failed to protect blacks and people of color from racist police who use deadly force with impunity.

At the United Nations, the countries of the world also made it clear that the United States had targeted American Indian communities with poisonous mining and toxic dumping, constituting environmental racism.

The United Nations has shown no willingness to actually hold the United States responsible for war crimes and egregious human rights violations.

While the United Nations grandstands on human rights issues, and postures before the world with its theater, it refuses, and fails to carry out the vital protection necessary for the world's migrants and  people of color.

The United States and the United Nations refuse to protect the world's most vulnerable asset -- migrant children -- and refuse to defend its most valuable asset, its children.