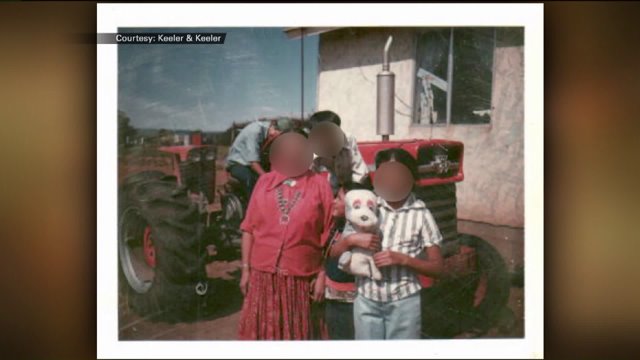 Two people, Identified in court papers as “MM” and “RJ,” pose with their mother in a photo provided by their attorney. (Image via William Keeler)

The Mormon Church, and each individual, must be held responsible for the sexual abuse of children who were placed in Mormon homes in the Mormon placement program.

The abuse of Indian children in church and state boarding schools, and in Catholic Churches by priests, was endemic and covered up by the US and Canadian governments, as well as the Australian and New Zealand governments.

Now, the sexual abuse of Navajo children in Mormon placement homes is being exposed. The churches -- the Pope and other heads of churches -- and each individual, should be held responsible.

Currently, the Church of Jesus Christ of Latter-day Saints is seeking a restraining order to block a pair of sex abuse lawsuits from moving forward in the Navajo Nation Court.

Publisher's note:
When I arrived in Window Rock, Arizona, on the Navajo Nation in 1979, the long yellow school buses were there, loading Navajo children to take them away to Mormon placement homes in Utah. The children came from homes in Sawmill, Crystal and other places. I was horrified. I wondered how can they take all these little children away. The little ones looked very scared.
Years later I met many of those children. They were no longer scared. They were angry.
They had not just been scared. They had been scarred.
-- Brenda Norrell

I AM "HORRIFIED" AND IN TEARS AS I WRITE THIS TO YOU...TO WHOMEVER WILL READ THIS...I WOULD NEVER HAVE KNOWN ANY OF THE EXPLOITATION AND ABUSE THAT THIS INCREDIBLE INDIAN NATION HAS SURVIVED...AND CONTINUE TO !!!!!! THIS IS ABSOLUTELY A TRAVESTY... IF IT WERE NOT FOR MY DEAR FRIEND WHO POSTED IT. I WILL GET THIS IN THE MEDIA BY DOING THE SAME...WHAT IS IT THAT WE CAN DO ??? PLEASE RESPOND