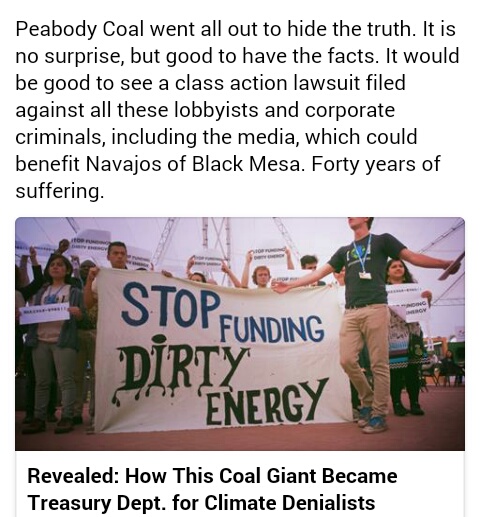 Peabody Coal went to extremes to lie, commit fraud and keep dirty coal operating. It meant 40 years of suffering for Navajos fighting forced relocation on Black Mesa.
Those responsible for the lies should be prosecuted. This includes those who lied and said the N-aquifer was not depleted by Peabody's coal mining.
The lives of Navajos at Big Mountain cannot be given back -- but the criminals, beginning with Sen. John McCain can be exposed and prosecuted.
"A Guardian analysis of the company's filings reveal that Peabody gave money to at least two dozen companies including trade associations, lobbying groups, conservative think tanks, and other organizations that campaigned against climate science and fought President Barack Obama's plans to cut greenhouse gas emissions," Common Dreams reports.
Peabody Coal funded groups to combat the movement by Indigenous climate change activists and environmentalists. In Arizona, ALEC was among those protested as a corporate criminal.
The Guardian writes:
Among Peabody’s beneficiaries, the Center for the Study of Carbon Dioxide and Global Change has insisted – wrongly – that carbon emissions are not a threat but “the elixir of life” while the American Legislative Exchange Council is trying to overturn Environmental Protection Agency rules cutting emissions from power plants. Meanwhile, Americans for Prosperity campaigns against carbon pricing. The Oklahoma chapter was on the list.