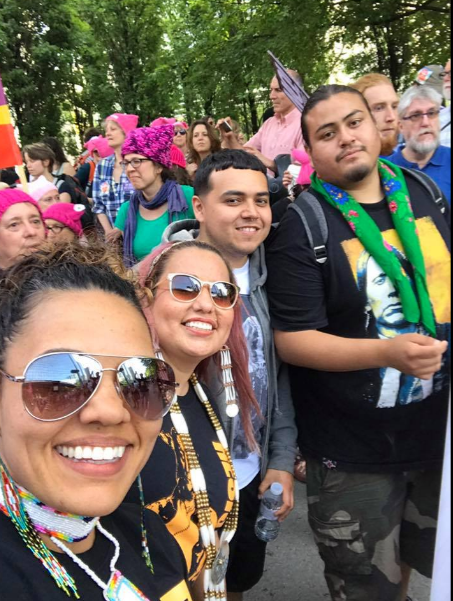 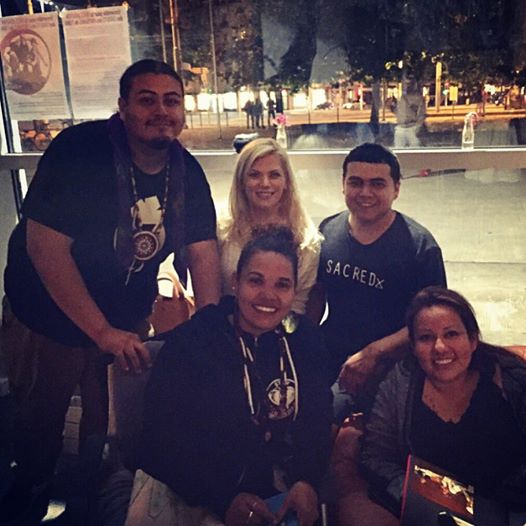 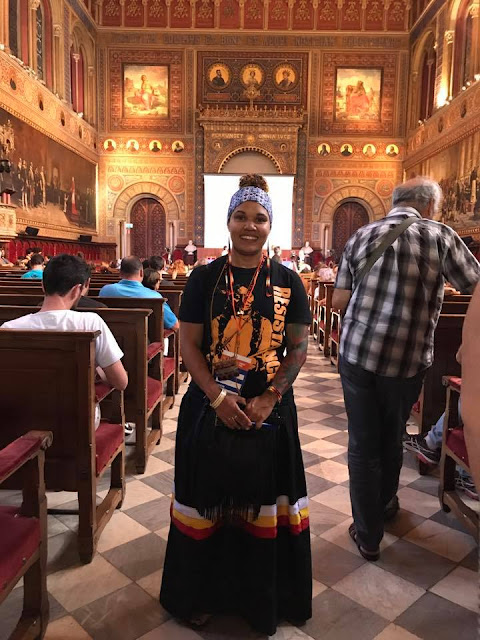 Rachel Heaton in Barcelona, Spain (Above and below) 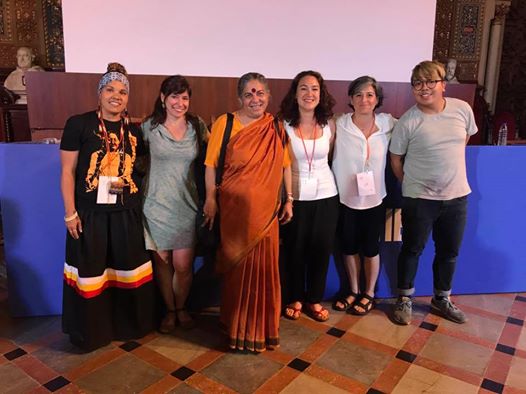 Water Protectors from Standing Rock ended their triumphant tour of Europe, with appearances in Spain and Italy, urging divestment in fossil fuels, investing in clean energy, and rallying for people to take control of the resources and protect Mother Earth.
Rachel Heaton, Muckleshoot, said, "Tonight I spoke on a panel with some amazing folks at the University of Barcelona. This was my last event, as I'll be heading home tomorrow. I'm glad it ended in such a good way. I have to admit, it was kinda weird to be sitting in a room surrounded by paintings of conquistadors."
Hip Hop Artist Nataanii Means, Dine' and Lakota, performed in Madrid, Spain, and Rafael Gonzalez, Dakota, led a rally in Bologna, Italy.
Rafael said, "Days ago, I was in Bologna, Italy with a group of activists from Làbas a political collective currently occupying the former Caserma Masini building/space. We did a critical mass bank action targeting Intensa San Paolo, one of several European banks funding the Dakota Access Pipeline. They are invested €349 million. We wrote a letter to the Carlo Messina and biked there to deliver it. Police in riot gear were waiting as they protected corporate interests. Although the bank did not send a representative to accept our letter, we made our message clear and I'm confident they hear our voices. We will not be silenced, and we will continue to put pressure on these banks that support the genocide, environmental genocide, environmental racism, and the desecration of our sacred land. Please join our struggle as we continue to fight the same colonial oppression we've faced for 500 years."
Mazaska Talks said, "As the month-long European tour concludes, our Water Protectors split ways. Here's a march Rafael Gonzalez attended in Bologna, Italy against G7 environment ministers' meeting." (Watch RT video below.)
During the 11 Country Tour, Water Protectors from Standing Rock camps addressed the United Nations in Geneva, and met with banking officials urging divestment in Energy Transfer Partners, owners of Dakota Access Pipeline in Paris and Switzerland. They stood in solidarity with those resisting polluters in the Netherlands, supported coal mine resistance in Germany, and led the 'Trump is Not Welcome Here' march at NATO in Brussels, Belgium.
While being met with warm welcomes by those defending the Earth in Europe, by contrast, bank officials insulted and booed the Water Protectors in Paris and Switzerland.
As Waste Win Young, Dakota Lakota from Standing Rock, was addressing Credit Suisse in Switzerland, bank officials insulted Water Protectors and denied the historical existence of American Indian genocide.
In Paris, Nataanii Means, Dineh/Lakota, and Rachel Heaton, Muckleshoot, spoke to the shareholders of Société General, BNP, and Nataxis banks.
Nataanii Means said, “Rachel and I were the only ones allowed in with our translators. We were met with derogatory yelling, boo's, and confrontation. When we stated that these banks and their investments into overseas pipelines directly affect my people and community, people began to make so much noise meant to muffle our voices while we were speaking. We were treated with unbelievable disrespect.”
The Tour was triumphant as he welded together the solidarity and resistance from the European continent with those who rushed bravely to resist Dakota Access Pipeline from the camps at Standing Rock.
Since last spring, thousands of Native Americans and supporters camped at Standing Rock to resist Dakota Access Pipeline, and the threat to their drinking water in the Missouri River, rushing in to police brutality, tear gas and water cannons in freezing temperatures.
Those who stood, and resisted at Standing Rock, were beaten by police and injured, they were locked up in dog kennels by Morton County in North Dakota, with numbers written on their arms as was done by the Nazis, and they camped in subzero temperatures under the constant threat of eviction, with drones overhead, snipers on the hilltops, and militarized police surrounding them with loaded shotguns, high powered rifles, and positioned in armored tanks with sound cannons.
The Water Protectors resistance began as a grassroots movement, and it continues as a movement of the people.
Water is Life. 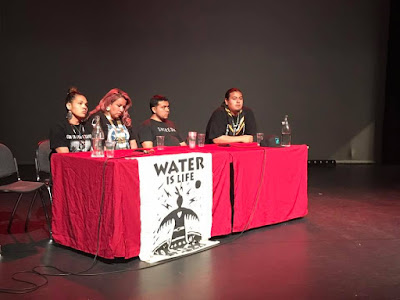 One of the many panels the Water Protectors presented
. 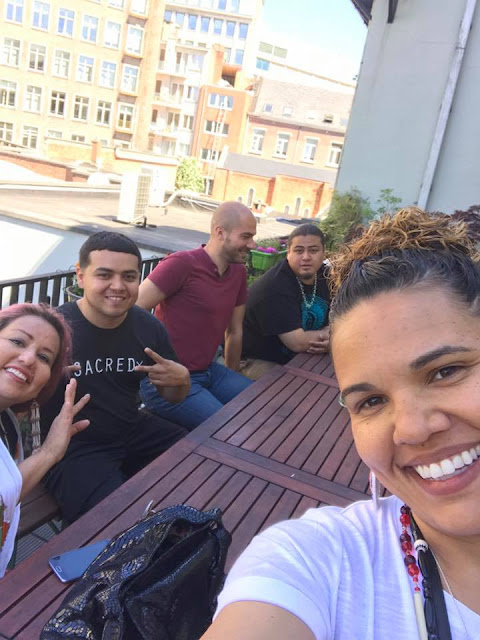