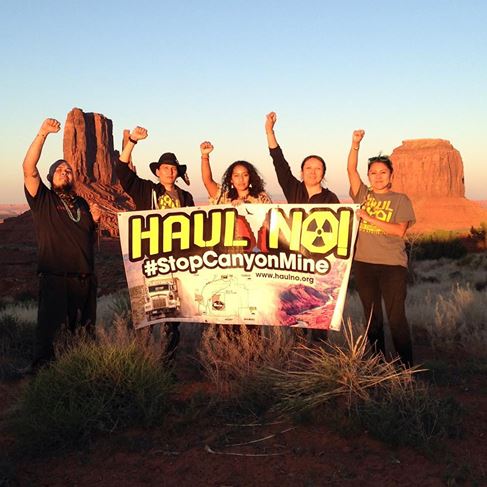 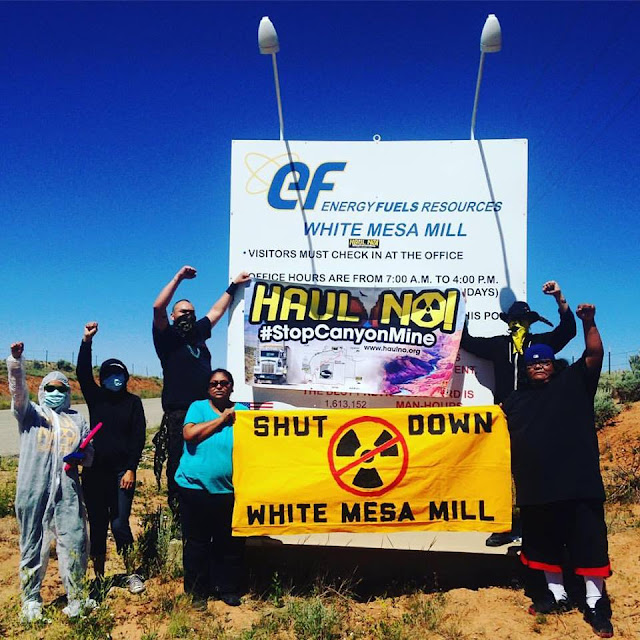 The 'Haul No! Tour' is now exposing, and resisting, uranium mining and transport on sacred lands of the Ute Mountain Ute and Havasupai, and the threat to the ground water for Utes and at the Grand Canyon.
Sacred lands are being desecrated by uranium processing and water and land is threatening by uranium hauling through Ute, Navajo and Supai lands.
Ute Mountain Ute depend on ground water from their wells for drinking.
"Please help us shut this mill down," said Yolanda, on this video in her homelands.
"We don't need any more of this nasty waste."
Energy Fuels of Canada owns the White Mesa Mill and Canyon Mine.
Canyon Mine is now threatening to poison sacred lands of the Supai at Red Butte in the Grand Canyon.
"Haul No! is an Indigenous led awareness and action tour along the proposed haul route. We intend to spread awareness and stimulate action to ensure the Grand Canyon, sacred sites, and our communities are safeguarded from this deadly toxic threat," said Native American organizers.
The Tour concludes at the Havasupai Gathering June 23 -- 25, 2017.

GRAND CANYON, Arizona  — As Energy Fuels Inc. (EFI) threatens to start uranium mining on sacred Indigenous Lands managed by the US Forest Service, just miles from the Grand Canyon, Haul No! has planned a 300 mile awareness and action tour along the Canyon Mine haul route.

Who: Haul No! is a volunteer Indigenous-led group collaborating with Indigenous communities and leaders, environmental organizations, and community-based advocates working to stop nuclear colonialism in the Southwest.

What: Haul No! Tour including presentations on public health, cultural and environmental impacts from uranium mining, and a direct action workshop. Starting near the White Mesa Uranium Mill, also operated by EFI, and stopping in impacted Indigenous communities and the city of Flagstaff, the tour will wrap up at sacred Red Butte near Canyon Mine. The tour will culminate at a Prayer Gathering organized by the Havasupai Nation.
When and Where: June 13–25, 2017 Why: Up to 12 trucks a day with 30 tons each of highly radioactive uranium ore are slated to be transported through mostly small reservation communities.The Havasupai Nation has legally challenged the US Forest Service due failure complete meaningful consultation with the Havasupai in their 1986 Environmental Impact Statement regarding Canyon Mine. A decision from the 9th Circuit Court of Appeals is still pending.
Although the Navajo Nation has banned transport of uranium through its lands since 2012, EFI would be permitted by the state of Arizona due to jurisdictional issues.

Possible radioactive contamination to land, water, and air from the Canyon Mine, White Mesa Mill, and transport of uranium would impact northern Arizona, southeast Utah, the Colorado River, Moenkopi Wash, the San Juan River, and the lands and cultural resources of the Havasupai, Hopi, Navajo, Ute, and Paiute peoples. 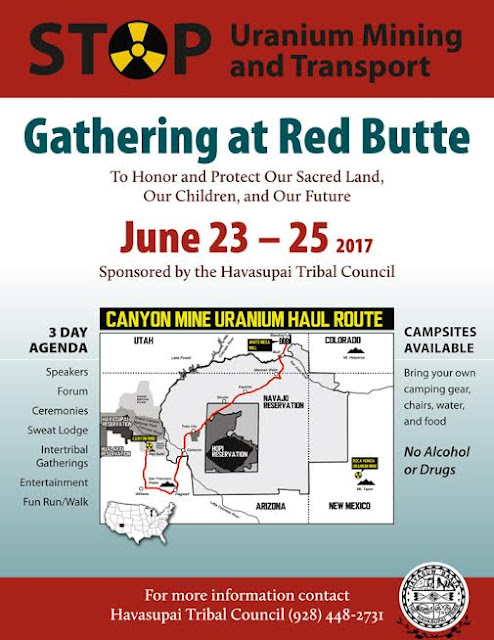