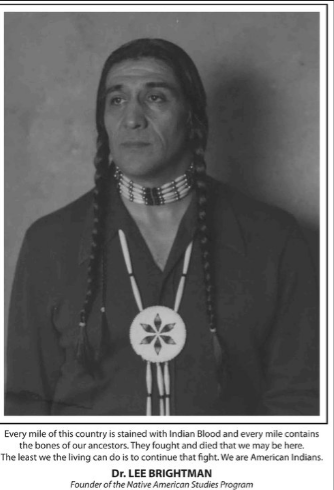 In HonorWe have lost another great warrior with the passing of Dr Lehman Brightman, Sr. Lehman or Lee, La Nada Means, and other militant activist-warriors in the San Francisco area boldly founded the United Native Americans (UNA) in the summer of 1968. As a college freshman, I will always remember his strong militant leadership and voice when we protested the anti-Indian presence of Secretary of Interior Walter Hickel (a pro-termination enemy of the People) and corrupt Vice President Spiro Agnew during the annual convention of the National Congress of American Indians in Albuquerque in October, 1969. In our direct action protest, we even took it to the streets when we blocked their motorcade procession from the airport to downtown before being surrounded and brutalized by armed security guards. Later, however, we managed to boo (or heckle) Hickel off stage at the convention. And I will never forget the powerful and eloquent speech he delivered in that packed conference room at the Motor Inn in Window Rock in August, 1970 on the need for militance, always, in the course of our activist work and the necessity of taking the strongest possible action in defense of native peoples and lands throughout the Americas. In January, 1978, I met him again at the Albuquerque Indian School auditorium when he spoke of his continuing work—as an activist and a scholar—documenting and exposing the horrific environmental and health impacts of uranium development on Navajo and Pueblo lands and the criminal motives behind the illegal mass sterilization of native women. I continued to follow and support his life’s work until 2011 when he suffered a crippling stroke and could no longer serve native people. A true warrior, he sacrificed and gave to his people. He gave and gave until he couldn’t give anymore. Like Herb Blatchford, Clyde Warrior, Mel Thom, and other great visionary leaders of the Red Power era, Dr. Lehman Brightman will always be remembered for his remarkable work and enduring legacy.All Our Relations,John Redhouse


Thank you John Redhouse, Dine', for sharing your memories of Dr. Lehman Brightman, who passed to the Spirit World on Sunday afternoon.
Posted by Censored News, publisher Brenda Norrell at June 19, 2017