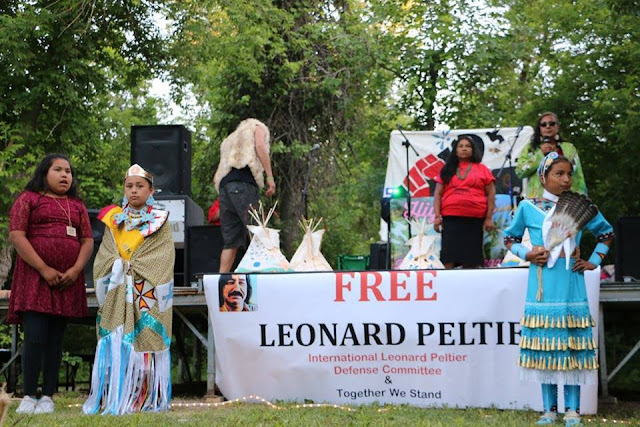 Statement from Leonard for the Oglala CommemorationGreetings Sisters, Brothers, friends and supporters.Well, here we are, another year, another memorial. After 42 yrs this does not get any easier. It seems as if you get lost for words. At times I feel as if it has all been for nothing, but I know that's just weakness speaking. The struggle is never for nothing. So many of our children, grandchildren and in my case now, great-grandchildren, depend on us to try and save our lands, our Nations, our culture, religion and our People. But the young people should know many of us are growing old and soon it will be our time to leave this world. The next generation has to step into our shoes and become leaders. As they say, they will have to step up to the plate and be a strong hitter of the ball. These are words that I have repeated many times over the years.To see the younger Sisters and Brothers who are doing just that is an enormous relief from the stress that stems from feeling we may have lost the Battle for Survival as a Nation of Peoples. From in here all I can see is a lot of areas where we are losing ground. Like the young drinking, drugging and gang banging - KILLING our own kids on our Rez. Streets with these drive by shootings, "How cowardly is that!” Then there are so many children who are living in this world of oppression. They take their own lives because they believe it is their only way out. Our young girls/women - fed up with the Rez life of dysfunctional family life and poverty and all of the evils that go with it - seek a better life by marrying out of our race, which in reality, is effectively an act of genocide AGAINST OUR OWN RACE. This is a strategy perpetuated by the usa government that has been going on for centuries now - 'breed the Indian out of the Indian' was their Plan. I know it’s true, "AS IT HAS HAPPEN WITH IN MY OWN FAMILY!” They wanted a better life. One with which they could at least escape poverty and be able to support their family.SO WHAT ARE THE ANSWERS? How do we correct or fight this and will the Powers that be allow us to correct it? Those remain very hard questions to answer. But we have tried and must continue trying. AIM and the other native organizations (it wasn't just the American Indian Movement), who believed in reversing those plans, all pushed hard through Native country and made them work in a lot of areas. Those that believed in our principals taught their children the ways of their tribes, culture, etc. I'm hearing their children are doing good things and are strong advocates of Native culture, our Nation, and Our People. Some Native Nations have almost eliminated alcohol and drugs, and more of their young people are finishing high school and going to college. Some are restoring their lands to their Natural Habitat after yrs, of destruction by mining or development. Although we have made many gains we are still a long way from being successful. So we elders need you young people to stand up and take over, as we have always said, and pursue a life on the good red road.When I first heard about Standing Rock - WOW! - what a proud, warm feeling went through my body. Here were MY people leading the way to try and save our - HELL, not just OUR's, but "The world’s!" future generations. This is what we in the 60's, 70's were doing with some of our political issues and protests. Standing Rock's water is a stand-in for the water we all depend on. It is so important for life. Without water we People, the Animals, the Land itself, CANNOT LIVE. IT’S SIMPLE AND THERE ISN'T ANY TRUTHFUL ANSWER OTHERWISE. Why can’t they understand this? The answer is because they don't give a damn!Well, I have said enough for now. Some of what I have said I’m only repeating and probably will repeat them the rest of my life. Until we win and the world is a safer place for all peoples, then I don’t feel like it is being said in vain. You all have a good day and thank you very much for all these the years of support and the love you have shown me. You’re awesome and it will be worth every moment of these 42 yrs of hell I have lived in if we - not me as one man -but we as a Nation and a culture, can emerge victorious.In the Spirit of Crazy Horse - Doksha, Leonard Peltier Visions of OldwatermarkVisions of OldVisions of OldThis is a painting that was loved by the owner for over 20 years. They respectfully gave it back to the ILPDC so another owner can admire and purchase it. All proceeds of sales go to the continual fight for justice for Leonard Peltier.
at June 27, 2017

With you in prayer for all the hope that your words hold and for forgiveness in the suffering imposed on you and your people.Blessings