Mohawk Nation News
Please post & distribute.
MNN. Mar. 3, 2017. This is a reminder to the errant illegal tribal and band council chiefs and traitors who are found to have committed treason, conspiracy and espionage against the people.
WAMPUMS 58 and 59 of the great peace of the rotino’shonni:onwe, [Iroquois Confederacy] provide for dealing with traitors who betray us by following foreign laws and threatening our existence. They have alienated themselves from their people [tekonatonkoton], are out of the rotino’shonni:onwe and forfeit all birthrights and claims.

TRAITORS WILL LEAVE WITH THE BLACK SERPENT NEVER TO BE SEEN BY THE ONKWE’HON:WEH AGAIN.
The rotino’shonni:onwe executed chiefs for treason and becoming allies of the enemy. Today’s corporate tribal and band councils and traitors follow the corporation laws of the enemy. Their job is to hand us over to the enemy, to help steal our resources, to keep us silent and to murder us.
Today the US, Canada, Britain and other colonizers go to foreign lands. They encourage people to become spies, traitors and conspirators against their own. They protect them by abolishing the people’s laws that should be appllied against these criminals. Those who try to protect themselves from them are charged by the colonizers with terrorism and other degradations of humanity. It is forbidden for us is to maintain who we are while tribal and band councils are protected and rewarded.
To betray the kaia’nere:kowa, the great peace, which is the binding tie between creation and all living things, is to do the work of the enemy. Internal treason is to raise conflict among their own people, to help the foreign aggressors by openly or secretly making fraudulent agreements that helps them steal the people’s possessions and rights. They help the foreign aggressors to carry out the program of genocide.

Traitors are given one chance to correct their error for the crimes of consipiracy, treason and espionage. Should they refuse, the law deposes the violator. The men will club them to death with the war club.
The War Chief shall order his men to enter the Council, take positions beside the errant chief or traitor sitting between them. The war chief holding in his outstretched hand a string of black wampum beads shall say to the erring chief or traitor:
“You do not heed the kaia’nere:kowa, which determines everyone’s fate. Since you are determined to betray and to withhold justice from your people, there is only one course for us to adopt”. the black wampum is dropped.

At this point the war chief shall drop the black wampum. If the errant chief does not grab it before it hits the ground, the men shall spring to their feet and club the erring chief or traitor to death. [tehonwatisokwariteh].
Any erring chief or traitor may become submissive before the war chief lets fall the black wampum. The black wampum symbolizes the last offer or hope for someone to comply with our way.
The law in all lands is that when someone commits an act that could cause the downfall of a people through conspiracy, treason and espionage calls for the the death penalty.
Eminem knows about watching your back: “Dealing with back stabbers, there’s one thing I learned. They’re only powerful when you got your back turned. I yearned for the day that we finally meet again, so I can give him a taste of his own medicine. He shed his skin, and he promised to come clean. I took his butcher knife and jabbed it into his spleen. Cuffed him at the scene, then dragged the fellow home, beatin’ him over the head with the telephone”. 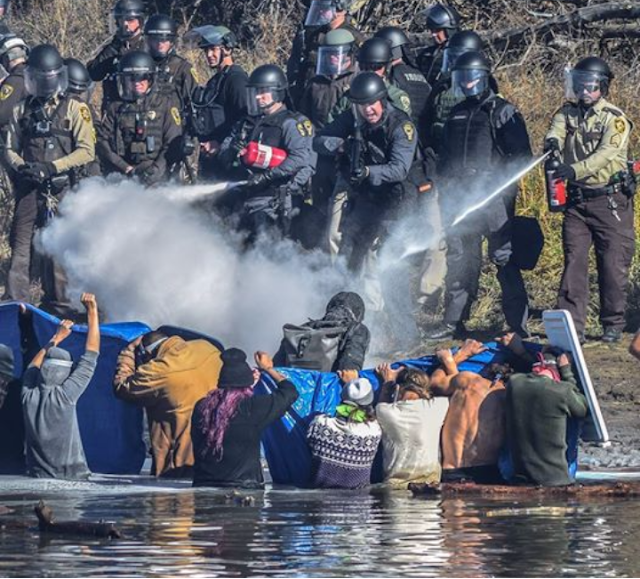 North Dakota Media: Racism and Protection of the White Supremacist Elite -- When the Media fails and becomes the Monster

The North Dakota media has repeatedly published and broadcast the lies of Morton County Sheriff Kyle Kirchmeier, without making serious attempts to verify the facts.
The North Dakota media has altered public opinion and justified the excessive force by police, resulting in brutal police violence inflicted on unarmed Native American water protectors and their supporters.
The brutality, torture and murder during the Civil Rights years in the South were fueled by this same time of racism.
In newsrooms, racism and the protection of the white supremacist elite, fuels racism and violence in communities.
The media's protection of elite white supremacists includes the protection of governors, judges, police and politicians. It includes protection of the elite and their family members from the consequences of their crimes.
The media owners, publishers, producers and editors are responsible for master minding the direction of its news.
When racism, and a white supremacist agenda, dominates the newsrooms, the media becomes criminals.
This happened in Alabama and Mississippi, when civil rights freedom fighters were beaten, shot, tortured and murdered. It happened in the bordertowns of the Navajo Nation. Now it has happened in North Dakota, continuing a long history of media fueled violence toward Native Americans in the Dakotas, including the bordertowns surrounding Pine Ridge in South Dakota.

Farmington New Mexico: An unwanted monument to racial violence and media lies
The racism and protection of white supremacists was obvious in the newsroom of the Farmington, N.M., Daily Times when I was a staff reporter at the newspaper in 1992.
This culminated when Navajo teens were attacked by white youths and beaten with baseball bats, breaking the bones of Navajo youths in Kirkland.
The article I wrote was rewritten by the Daily Times editor in order to place blame on the Navajo teenagers. I demanded a retraction from the newspaper. I was fired.
I reported this to the U.S. Civil Rights Commission, who was hearing testimony in Shiprock on the Navajo Nation, where I lived and worked.
The torture and murder of Navajos in Farmington by white supremacists was documented in the book, The Broken Circle, by Rodney Barker.
The repeated tortures and murders of Navajos and other Native Americans in Farmington, N.M., and Winslow and Flagstaff in Arizona, were seldom investigated or prosecuted.
In fact, one person who testified about the police violence in Farmington, to the U.S. Civil Rights Commission, was stopped by police more than 20 times for minor traffic reasons after he testified.
The Farmington Daily Times was then sold to new owners.
This brings us back to the complacency and disregard for ethics by reporters, editors and media owners in North Dakota, who have made no attempt to provide fair and balanced coverage of the water protectors who camped at Standing Rock along the Cannon Ball River, to protect the Missouri River from the Dakota Access Pipeline.
It was only after Sheriff Kirchmeier carried out the militarized police assaults on the prayer camps -- and admitted that no weapons were found -- that the North Dakota media finally admitted this and parroted his words.
How much damage and violence resulted because the North Dakota media influenced public opinion and incited violence, resulting in serious injury to unarmed water protectors.
The failure of the North Dakota media to report in a fair and balanced manner, further endangered the water source of millions, including the water source for the reporters own families and future generations.
The collapse of the media and failure to uphold justice resulted in months of prolonged police violence with police firing rubber bullets. tear gas, and water cannons in freezing temperatures. Elderly and youths were beaten by police, attacked by vicious dogs and jailed without authentic charges.
An egregious violation of law and human rights took place when Morton County repeatedly arrested Native American elderly in ceremony, strip searched them, wrote numbers on their arms with black markers, as was done by the Nazis, and forced elderly to sleep on concrete floors in chain link fence "dog kennels" without proper medicine or food.
This should have been the headline news across America.
The national news media, including the New York Times and national television networks, failed all of us. They have the funds and resources to be present. They failed because Native American water protectors, and police violence against Native people, is not a priority.
Money, advertising, corporate and political bedfellows, backdoor deals and America's big oil agenda all play a role in what the media goes out and covers, and what the media actually reports.
Racism and the protection of the white supremacist elite dominates mainstream newsrooms in the Dakotas.
It is part of the dark secret of newsrooms in America that incite violence and protect white criminals.
The media is the same monster it pretends to be fighting.

--Brenda Norrell
Brenda Norrell has been a news reporter in Indian country for 35 years. She began at Navajo Times during the 18 years that she lived on the Navajo Nation. She was a stringer for AP and USA Today.
After being fired by Farmington Daily Times, after objecting to its racist agenda, she was hired as a staff reporter by the new Indian Country Today in 1995. After Indian Country Today was sold, she was censored and then terminated in 2006. As a result, she created Censored News, now in its 11th year with no ads or revenues, and 16 million pageviews.
The coverage has been live in Bolivia, alongside the Zapatistas in Mexico, and throughout the West. She has been blacklisted by the mainstream media for a decade.
at March 03, 2017 2 comments: