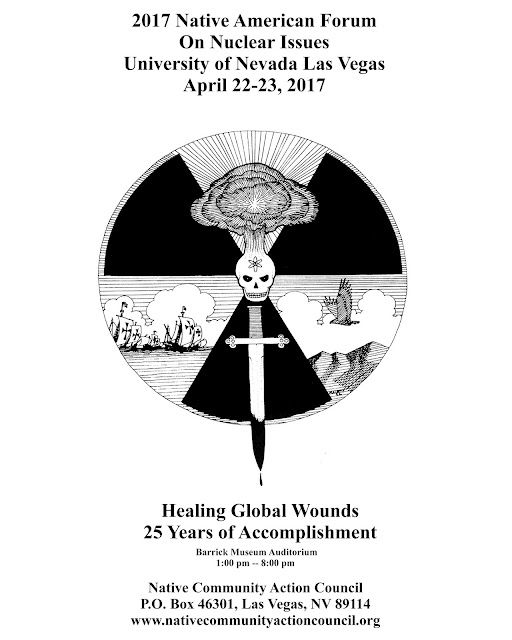 By Ian Zabarte, Western Shoshone
Secretary of the Native Community Action Council
Censored News
LAS VEGAS, Nevada -- Native Americans are preparing to meet the renewed threat of the proposed Yucca Mountain High Level Nuclear Waste Repository by educating themselves about cancer risks by hosting the Native American Forum on Nuclear Issues 2017 (NAFNI 2016) at the UNLV Barrick Museum Auditorium.
Joe Kennedy of the Timbisha Shoshone Tribe in Death Valley stated, “Our effort is focused on cancer prevention by understanding exposure pathways then conducting risk mitigation in Native American communities.”Since 1951 the US and UK have conducted nuclear testing within Western Shoshone homelands causing a wide variety of adverse health consequences know to be plausible from exposure to radiation in fallout. The proposed Yucca Mountain high level nuclear waste repository, if licensed, will add significant risk factors to the lives of the Shoshone and Paiute people.
According to Ian Zabarte, Secretary of the Native Community Action Council, “Yucca Mountain is within the Shoshone treaty boundary and therefore cannot meet the licensing requirement of ownership since the treaty is in full force and effect. This is our primary contention at the Nuclear Regulatory Commission Atomic Safety Licensing Board.”
.The NAFNI 201y will have presenters speaking about protecting the Grand Canyon including Professor Michael Lerma of Northern Arizona University, author of Indigenous Sovereignty in the 21st Century; Tribal Council Member, Carletta Tillousi, Havasupai Tribe; Klee Benally, Dine’ (Navajo); Leona Morgan, Dine’ No Nukes; Joe Kennedy of the Timbisha Shoshone Tribe; and the Native Community Action Council board members representing Shoshone and Paiute people.
Native Community Action CouncilP.O. Box 46301, Las Vegas, NV 89114nativecommunityactioncouncil@gmail.comwww.nativecommunityactioncouncil.org


Native Community Action Council
P.O. Box 46301
Las Vegas, Nevada 89114
A Native American Yucca Mountain Experience By Ian Zabarte By the year 2001, the Environmental Protection Agency set the radiation protection standards for Yucca Mountain without considering the comments of the Native Community Action Council challenging the Environmental Protection Agency standard for not being protective of Native Americans.
The Environmental Protection Agency set the radiation protection standard based upon a individual living 11 miles from Yucca Mountain getting water from a well and farming, in what is known as, the “reasonably maximally exposed individual.”
No consideration was given to the comments of potential impact to Native Americans and the Department of Energy adopted the Environmental Protection Agency standards denying any arguments that do not support licensing of Yucca Mountain.
This amounts to environmental racism, a violation of President Bill Clinton’s Executive Order 12898, Federal Action to Address Environmental Justice in Low Income and Minority Communities.
As the Yucca Mountain licensing proceeding before the Nuclear Regulatory Commission loomed in 2008 the Native Community Action Council began preparing for the licensing and in December of 2008 intervened in the Atomic Safety Licensing Board Panel of the Nuclear Regulatory Commission.
Two contentions of the NCAC deal with ownership of land and water rights. Specifically, the NCAC relied upon the same federal statute that created Nevada, as the foundation for the ownership interests that accrue to the Shoshone people.
The 1861 Nevada Organic Act states: “Provided, further, That nothing in this act contained shall be construed to impair the rights of person or property now pertaining to the Indians in said Territory, so long as such rights shall remain unextinguished by treaty between the United States and such Indians, or to include any territory which, by treaty with any Indian tribe, is not, without the consent of said tribe, to be included within the territorial limits or jurisdiction of any State or Territory.”
In December of 2014, the NRC Office of Nuclear Material Safety and Safeguards published long awaited Safety Evaluation Report Requirements NUREG-1949, Volume 4: “The NRC staff finds that DOE has not met the requirements 10 CFR 63.121(a) and 10 CFR 63.121(d)(1) regarding ownership of land and water rights, respectively.”
The Native Community Action Council, representing the Shoshone and Paiute people intervened in the Nuclear Regulatory Commission licensing of Yucca Mountain. The Nuclear Regulatory Commission proceedings are regarded as the most complicated and lengthy legal proceeding ever contemplated in human history.
The Native Community Action Council achieved “party with standing” in the proceedings before the Atomic Safety Licensing Board Panel without any financial support bringing three contentions--one contention related to the National Environmental Policy Act and two legal contentions related to ownership of land and water rights.
The Native Community Action Council is the only non-federally funded party to the licensing proceedings, whereas the Department of Energy together with other parties including the Nuclear Regulatory Commission and the State of Nevada and have spent approximately $15 billion.
The Shoshone and Paiute peoples began questioning impact to the people and land from radioactive fallout released by the United States and United Kingdom testing of weapons of mass destruction. Between 1986 and 1990 the Shoshone and Paiute participated in the creation of the Radiation Exposure Compensation Act of 1990 with former United States Secretary of the Interior Steward Udall and local Las Vegas lawyers Larry Johns to provide payment to downwinders--up to $50K, $75K for on-site participants; and uranium miners up to $100k for cancer illness for 15 primary cancers.
Citizen Alert, then Nevada’s only state-wide grassroots environmental organization, collaborated with the Shoshone and Paiute people to create the Nuclear Risk Management for Native Communities Project. Research conducted by the Native Community Action Council reviewed the Department of Energy Off-Site Radiation Exposure Review Profile and found that the Department of Energy did not replicate Native American lifestyle as they exist and instead substituted a sheep herder lifestyle for analysis.
The Native Community Action Council research found significant increased exposure to Native Americans based on lifestyle differences that include:
1) diet--what Shoshone and Paiute people ate and how their food was prepared;
2) mobility—where they went and what they did there;
3) shelter—where they lived and what their houses were made from. Citizen Alert no longer exists but, today the Native Community Action Council proudly bears the banner, “Nevada is Not a Wasteland” to protect the people and land of the Great Basin. Twenty-five years ago, the Shoshone and Paiute people organized the first Healing Global Wounds event, the first Native American conference and pow-wow ever held at UNLV on the anniversary of 500 years since European “discovery” of North America.
The Native Community Action Council is preparing to meet the continuing licensing of Yucca Mountain by hosting the 2017 Native American Forum on Nuclear Issues at the University of Nevada Las Vegas on Earth Day, April 22, 2017. The Las Vegas community is invited to participate. Further information can be found at: www.nativecommunityactioncouncil.org
at March 23, 2017 No comments:

Please post & distribute.
MNN. Mar. 23, 2017. US President Trump is posturing for a war with China over North Korea. In effect, he said, “ We owe China $1.7 trillion and we are not paying any of it. We have power over them and will force them to do our bidding in North Korea. They will do as they are told, or we will nuke them”. https://www.youtube.com/watch?v=CY9nX4WP0eI See Trump posture war with China.

When the “Americans” came to great turtle island they made a deal to have a relationship with our ancestors to live in perpetual peace forever, based on the guswentha, two row wampum. They set up a trust account for the onkwe’hon:weh, which is now over $999 trillion. The corporation stole all our money and resources and reneged on that agreement. They murdered over100 million of us while doing this.

The US has reneged on every agreement they made with us. They owe us everything they ever made from ono’ware:keh, great turtle island. They owe us more money than the world has. They want to continue with their warring and destruction of mother earth in the process.
The rest of the people of the world need to stand up against the big bully called the USA before they destroy all mother earth. Borders, governments, power, money are illusions. People are born into this man-made slavery of the mind system.

UK marshall law timed with Trump outburst.
The private corporation called USA got its existence through an illegal war on great turtle island and the genocide of 100 million to get our land mass as their base. It is not theirs, it is the land of the onkwe’hon:weh, the natural people. What the American bankers did to us they are now doing to Palestine. They will continue following this business plan until they enslave everyone on earth, or until the world stands up against them.

.
Dear Friends and Allies,
With the beauty and strength of the Spring Season unfurling in the Northern Hemisphere, the Women's Earth and Climate Action Network is busy organizing and helping coordinate an unexpected, and very special delegation to Norway, in support of and solidarity with Indigenous women on the frontline of the ongoing Standing Rock, Dakota Access Pipeline resistance. We kindly request your support for the delegation and follow-up efforts.In the face of continued human and Indigenous rights abuses, and action by the Trump administration to push forward and terminate the Environmental Impact Statement for the Dakota Access Pipeline - Indigenous women remain undeterred in their quest for justice and healing regarding the violations occurring through the continued construction of DAPL and other fossil fuel developments threatening their homelands across the country.  From March 25th to April 2nd, 2017, the 'Indigenous Women's Divestment Delegation to Norway: Experiences from Standing Rock' will travel to Norway to engage with financial institutions, public officials, civil society groups, press and media. They will participate in a variety of strategic platforms to share their experiences and calls to action, with a focus on continued forward motion in advocacy for full fossil fuel divestment and investment in a clean energy future that respects the web of life.Several of the world's largest financial institutions supporting the Dakota Access Pipeline and other dangerous fossil fuel developments are based in Norway.All of the Delegates have been deeply engaged in the Standing Rock resistance effort and other movements to stop fossil fuel infrastructure developments and threats to Indigenous rights, sovereignty, lands and lifeways. Please click here to contribute to this important Delegation!"Making Indigenous human rights abuses visible is critical to ending human rights abuses against Indigenous peoples. Indigenous women deserve spaces where they can share their personal testimonies regarding the impacts of extractive industries on their lands, lives, bodies, and human rights. This delegation provides that rare opportunity, for Indigenous women to address issues critical to our life-ways and survival." - Michelle Cook, Diné/Navajo human rights lawyer and founding member of the Water Protector Legal Collective at Standing Rock.

For the Earth and All Generations, Osprey Orielle LakeCo-Founder and Executive DirectorWomen's Earth and Climate Action Network
at March 23, 2017 No comments: