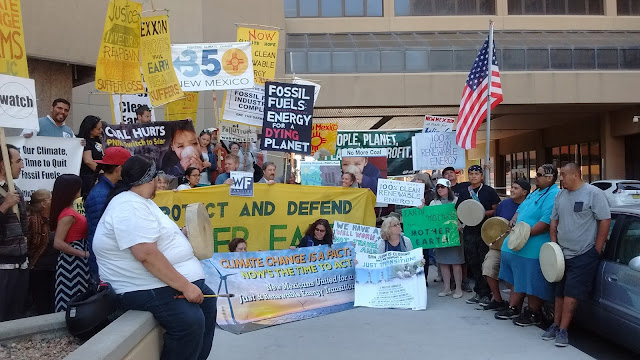 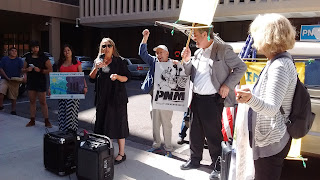 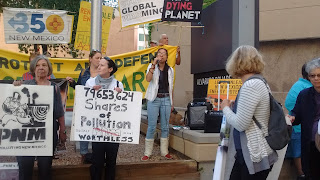 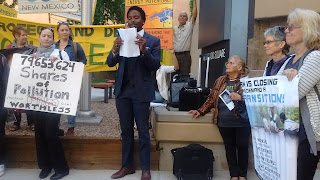 As a large crowd outside Public Service Company of New Mexico's Albuquerque headquarters called for more clean energy, shareholders inside considered resolutions to direct the company to take into account the risks of climate change to its finances and to ratepayers.
The first resolution would assess the portfolio impacts of policies to keep global warming under 2 degrees Celsius. The shareholder-advisory company ISS recommended support, saying "shareholders would benefit from additional information about the impact that climate-change regulations might have on the company and its operations."


The second requested an assessment of PNM assets that might become stranded as a result of climate change and demand reductions, and on the financial risks of those stranded assets. ISS also recommended a Yes vote on this resolution.

Neither resolution passed at PNM's annual meeting Tuesday, though shareholder Charlotte Levinson, addressing the crowd after Tuesday morning's meeting, said shareholders of Occidental Petroleum passed similar resolutions this week. Levinson said just bringing these resolutions puts pressure on PNM to understand the urgency of transitioning to cleaner energy.
"PNM has acted at a snail's pace to ends its dependence on climate-altering fossil generation. It is encouraging to see that even the investor owners are demanding a rapid transition to clean energy, for our economy and our survivability," said Mariel Nanasi, Executive Director, New Energy Economy.

David Coss, Sierra Club Rio Grande Chapter chair, said: "As PNM is finally acknowledging that market forces have made its coal power uneconomical, it's time for the company to plan for community and worker transition, including clean-energy reinvestment in the Four Corners communities. This should be a top priority in PNM's planning."

Eleanor Bravo, Food & Water Watch Southwest director, said, "A just transition to renewables must be a mandate, leaving the devastation of fracking and pipelines in the past. Private companies like PNM need to gain awareness of the gravity of climate change and provide their customers with a 100% clean-energy option."

"Since 2008, PNM ratepayers have paid 30% more for electricity than others in the Southwest, while New Mexican household income has decreased by 6%," said Rebecca Sobel, senior climate and energy campaigner for WildEarth Guardians. "PNM executives ignore the case for renewables and are no better than Trump's cronies, expecting the public to bail out billionaires. Fossil-fuel futures are down, and PNM should be more concerned with raising up the interest of ratepayers instead of forcing us to sink more money into dirty and dangerous stranded assets."

Tune into AM 660 or online at: www.ktnnonline.com

Percy Deal, before the NGS Stakeholders Meeting, Phoenix May 16, 2017 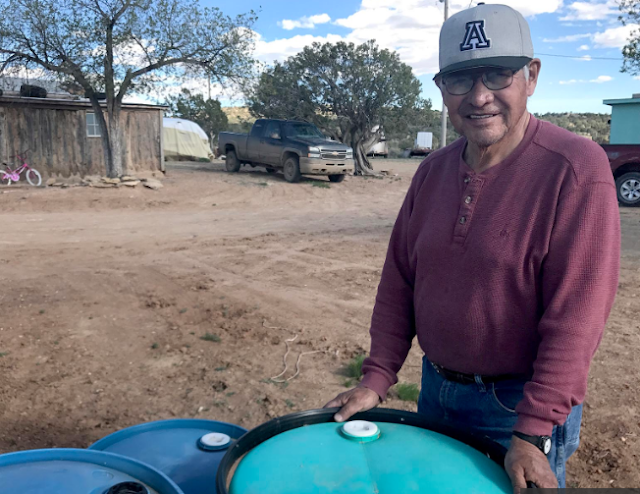 Statement by Percy Deal, before the NGS Stakeholders Meeting, Phoenix, Arizona on Tuesday, May 16, 2017

My name is Percy Deal. I am 67 years old, retired, and I raise cattle. My family and I live south of the Peabody coal mine on Black Mesa, Arizona. The oral history of my family and our ties to Big Mountain are known at least eight generations back to the time before Fort Sumner Concentration Camp. In 1978, we lost part of our ancestral land to the Hopi Tribe through the 1978 federal partition order. Although I am retired, I volunteer and serve as board member to two Navajo grassroots organizations, Diné CARE and Tó Nizhóní Ání.

I want to first thank the Department of Interior for allowing me to sit with you. It means a lot to me and my community. I have been reading and hearing a lot about the closure of Navajo Generating Station and Peabody Energy's Kayenta coal mine. I have noticed most of the articles on this topic are mostly about jobs and revenue that the Navajo and Hopi tribes receive. Although that information is important and must be addressed, there are other important issues that also need to be discussed but which nobody is talking about.

Other issues deserving attention that are perhaps even more important than the jobs and revenue are the livelihood of approximately 20,000 people living in the surrounding area on the Navajo Nation. There is not enough attention on this. I want to take people back to 1969 when the leases were first signed. I was in high school in my late teens in a small community called Snowflake in Navajo County. The school was almost 200 miles away from my home.

My mother told me about a meeting that took place in Hardrock (AZ) before 1969 on the Navajo reservation. Many local people came to hear a white man, who also had with him a Navajo interpreter from Window Rock. In those days, visitors from outside were very rare. We were taught that anyone coming from Window Rock was to be given the highest respect because they were our leaders. We believed them to be honest and highly credible.

The people were told about two big workforces coming in, one an electrical transmission line that would be built to bring electricity to homes and the other would bring big machines to dig for coal. Both these workforces would provide jobs and money.

But the people from our area were never told how much water would be used or that these new industries could cause health problems and contamination to the land and water. We never imagined or envisioned how big or permanent an operation Peabody's mine would be. We never imagined how much water would be taken by Peabody and NGS. We didn't know that during that time, we would lose great quantities of Navajo aquifer.

Eventually, we began to notice changes to the land as the water was used up, like our natural springs producing less and less. Our plants and herbs that we depended on for food, and medicinal and ceremonial purposes were disappearing. Vegetation changed, with the original natural plants disappearing. The mining and pollution from the smokestacks at the power plant also affected our livestock and wildlife. Wild animals – elk, deer, antelope and turkey – also began to disappear. We depended on these creatures for food and ceremonial purposes. Our communities began to notice people getting sick more often, with many having a hard time breathing. Doctors were saying it was asthma, and people were issued an apparatus to help them breathe. Some families even spoke about losing their loved ones due to working at the mine.

To this day, a half century after NGS and the mine were constructed, thousands of families in the western portion of the reservation and on Black Mesa still do not have water for their use. For all most 50 years, the water has all been dedicated to two industries to support their operation. The weather has changed, our earthen dams no longer catch and hold water. Heat and erosion have taken over. These changes affect our ceremonies and our way of life. This was supposed to be water for our domestic use, for our animals, crops and irrigation. The two industries have used, wasted and contaminated over 2,000,000 acre-feet of water. While we had none. This is our water.

In 2005, the Mojave Generating Station stopped buying coal from Peabody. Next to Peabody mine was the Black Mesa pipeline, which was built for the purpose of slurrying coal to Mojave. The pipeline stopped operating in 2005, 13 years ago. But despite promises by Peabody that everything would be cleaned up, the Black Mesa pipeline built is still there. There was never any decommissioning, cleanup or restoration of the land. The owners of Mojave and Peabody just walked away. Who is responsible for the cleanup now?

We hear that the closure of NGS will devastate the Navajo Nation. A recent news article from New York Post said "the entire Native American Nation will be devastated … the shutdown will crush its people." The Navajo President is quoted saying, "My people suffered so much, we cannot lose one more thing." Those are highly misleading and inaccurate statements. I think our nation is better than that. We are resilient people. We know that 50 years of operation of NGS and the mine have already destroyed much of our livelihood. We see the shutdown as an opportunity to rebuild the Navajo Nation into a far more sustainable and equitable community. We want restoration of all there was.

We want to be involved not just today but at all future stakeholders' meetings. We thank Department of Interior for the listening sessions, but there will be no discussion in those sessions. There are negotiations going on between the Navajo Nation Council, DOI and other parties. Before any talks began, the Navajo government should have come to the communities and asked what we thought about the closer and seek our input. Nobody asked us, but I have talked with many Navajo, including many who work at NGS and at the mine, and we are all ready to move to something better than coal. We all knew this day was coming.

We believe our right to water from the N-Aquifer and from the Colorado River was never waived. It's our water and we want to reclaim it at the earliest time. We want resources that will provide education and technical assistance to take Navajo communities through a decommissioning process. We want to be assured of a complete cleanup and restoration at the plant and mine sites. We do not want to see the same thing happen here that happened with abandoning the Black Mesa pipeline for us to clean up.

We want the owners/operators of NGS and the mine to ensure that their workers are provided with a healthy retirement, health benefits, retraining and job transfers. We want the owners to provide resources to develop and support the Navajo and Hopi tribes' vast energy potential, creating new jobs and developing sustainable businesses. We want commitment from the utility owners of NGS that they will buy power from Navajo wind and solar projects. We want transmission line rights transferred to the tribes to support our efforts to transition to renewable energy.

We want all these things. And after 50 years of taking from the Navajo and the Hopi, the people making decisions about the future of NGS and the Kayenta Mine have a moral obligation to ensure that we are finally treated with justice and fairness.

Thank you again for the invitation to take part in your meeting.