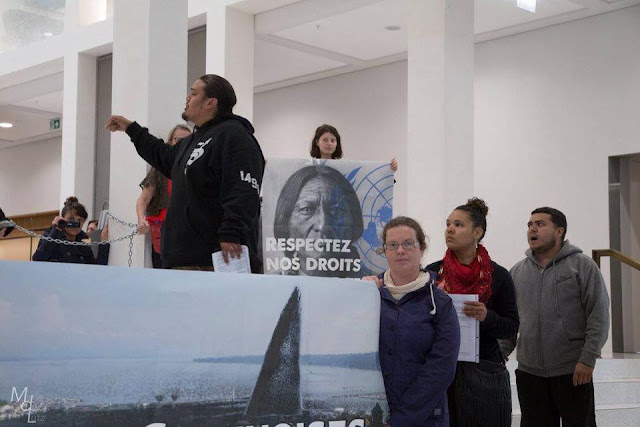 Describing the Native American resistance in Standing Rock, he said, "This wasn't the first one, and it isn't the last."

"As Indigenous People we grow up in this, because we know nothing else."
"From the time we are born, we are fighting something."
Nataanii, who grew up in Chinle, Arizona, on the Navajo Nation, told of the open uranium mines on his homeland, and how radioactivity leaked into Navajos ground water and water sources. Now, the people are dying from cancer. He said this could happen to him.
Nataanii described the large open pit coal mine on the Navajo Nation.
"It is one thing to hear it, it is another thing to live it, it is another thing to die from it."
Nataanii said North Dakota is an oil boom state and the Dakota Access Pipeline was originally supposed to go through Bismarck.
Describing the suicide, and the violence inflicted on Native people, he said this oil boom is contributing to the violence against Native people. He said the violence has resulted in sex trafficking and murdered and missing Native women.
Dakota Access Pipeline did not pass through Bismarck, because the route was moved to 1851 Treaty land, he said.
The 1851 Treaty was the first of two treaties. A Peace Treaty followed because the U.S. wanted its wagons to pass through the land.
"We gave them peace. But the Treaty was never honored."
Treaties are the Supreme Law of the Land, but the U.S. has never honored the Treaties, he said.
Describing the manipulations of the law and permitting that resulted in DAPL receiving a permit, he said, "They fast tracked this pipeline to go through."
Nataanii described how the resistance movement and camp was started by youths and women of Standing Rock and Cheyenne River Tribes.
The youths ran from Standing Rock to Washington D.C. Then, in August, DAPL came in with their bulldozers and they struck artifacts.
Nataanii said he arrived the next day.
From that point on, he joined those who fought the pipeline, in a peaceful way. Resisting in a peaceful way was requested by the elders and it was honored.
Dakota Access Pipeline hired TigerSwan, former Blackwater, mercenaries, as private security.
"On our first encounter, they sicced dogs on us."
"They came out with huge dogs, and they released dogs on us."
Nataanii said the dogs took one woman down by her breast and the security guards laughed.
Nataanii also described meeting with Credit Suisse in Geneva, Switzerland.
"We told them they are investing in the Genocide of our People."
Nataanii described the heartless reaction of Credit Suisse. The bank's sustainability officer denied the genocide of Native Americans.
Nataanii said the fact is that American Indians were reduced to about 200,000 through genocide.
This genocide continues.
"Almost everything was destroyed. That is genocide."
"Now I watch my people die from cancer."
"I watched my dad die of cancer, my grandpa, my friends."
The militarization of the police grew worse at Standing Rock.
"It was hard to remain unarmed."
He said they remained peaceful because there were children in camp. They did not stand a chance against the militarized police and guns.
Standing Rock was not the beginning, and will not be the end.
The resistance continues in New Mexico, and elsewhere, as Keystone XL is also being revived, and the fight continues against Enbridge in Canada.
"We've won before, it is possible to win again," Nataanii said, describing some of those victories.
"I have faith we can stop this pipeline through divestment."
Nataanii described the Tour to Europe, and how Water Protector Rachel Heaton, Muckleshoot, worked hard in Seattle for Wells Fargo to divest in DAPL.
As for Credit Suisse in Geneva, he said, "They are heartless. They have no soul." He said the bank's sustainability officer flew in from Zurich.
Nataanii asked for help in this fight.
"You have voices and can go places we can't."
Urging people to struggle to save this Planet, he also urged the people here not to let it get to the point where the water is flammable.
Due to imminent domain, the people didn't even have a chance to say 'No' and stop DAPL.
Nataanii said the Earth will heal itself, but the people must be humbled.
"Keep fighting, keep up the resistance."
Nataanii told the people here, to keep up the resistance, and the knowledge, because it is helping.
Nataanii Means joined Water Protectors from Standing Rock Camp, Rachel Heaton, Muckleshoot from Washington State; Waste Win Young, Dakota Lakota from Standing Rock; and Rafael Gonzalez, Dakota from Minneapolis. The Tour concluded in Spain and Italy, and included 11 countries in Europe.
at June 18, 2017 No comments: