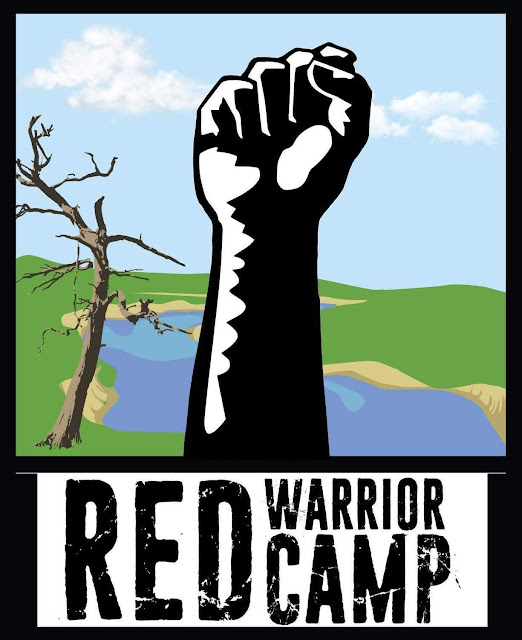 RED WARRIOR CAMP SPEAKS
Contact: Email: redwarriormedia@gmail.com
"Mni Sose' called our Spirits.  From the four directions, we traveled alone or in caravans, to gather at the river banks.  We formed a self-sufficient camp and lived together with love, ethics, principles, and protocols guided by ceremony, prayers and medicine.  Our focused, singular, collective goal was to manifest our training and energy to protect sacred water.   We committed ourselves to the tactic of non-violent direct action to slow or halt the construction of the Dakota Access Pipeline north of the Standing Rock Reservation while the tribes and lawsuits moved forward.  In acknowledgment of the 500 years of genocide, treaty breaking, and human rights violations against our people by the United States government in favor of resource extraction and land thefts, we knew we must have a strong frontline.  We gathered allies from proven social justice movements.  We protected our work through principles of security culture, knowing the corporation would stop at nothing to realize their financial investment and future profits.  Tactics of infiltration, dissension, rumors, divisiveness, and lies orchestrated by DAPL and its hired guns soon began to weaken the solidarity of all the camps.  Their tactics continue today.  All the camps moved, were burned or torn down.  People scattered to the four directions.  We have people still engaged in the judicial process, going to court.  Many charges were dismissed.  We carry on with water and land defense work, cultural revitalization, decolonization.  We come from all walks of life, races, ages.  Our collective experience is a powerful weapon we took to Standing Rock to share with others to help stop DAPL.  We are Red Warriors," Stated Debra White Plume.
We represent 27 tribal nations and 10 countries with no regard to the United States' imaginary borders, to defend the land and protect the water through Non-Violent Direct Action.  Collectively, known as Red Warrior Society, we have decades of experience in grass roots, community-based organizing to protect our natural resources.
Red Warriors are highly disciplined, principled individuals who encompass a unique skill set to provide non-violent direct-action trainings, decolonization tools and organize actions to primarily youth with an emphasis on security culture.
There are many definitions of security culture.  Every movement and resistance group and camps should carefully set their standard accordingly to ensure the safety of those involved in the protection of all that is sacred.
Red Warriors are self-sufficient, with minimal impact to the land and resources. These principles are utilized in our actions, both at the NoDAPL direct action in North Dakota and other actions and trainings throughout Turtle Island.
The recent array of propaganda films being released on the NoDAPL camps are reminiscent of the U.S. Government-led COINTELPRO tactics employed against indigenous resistance movements in the 1970's.
In a recent Intercept expose' (https://theintercept.com/2017/05/27/leaked-documents-reveal-security-firms-counterterrorism-tactics-at-standing-rock-to-defeat-pipeline-insurgencies/) on Energy Transfer Partner's security contractor TigerSwan, and their counter-terrorism tactics, it was revealed that Big Oil's hired guns focused their attention on Red Warrior Camp over a four-month period. This information did not surprise us, given the dozens of drone flyovers and imminent threats that occurred daily.
Their report dated, September 22, 2016, states, "Information control within the camp, despite causing dissention, makes any internal source information difficult to acquire."
Our level of security protocols is necessary because we are under intense scrutiny, as validated by the TigerSwan report.
A recent pro-DAPL propaganda film features an interview with Lt. Jason Stugelmeyer of the Bismarck Police Department.  Stugelmeyer claims that no water protectors were stripped searched or held in chain link dog cages upon arrest.  However, eyewitness testimony confirms that hundreds of water protectors were stripped searched and held in the dog cages for processing into Morton County Jail.
Allegations against Red Warrior Camp are the highlight of a recent open letter addressed to resistance organizers.
MYTH: "…it has been co-opted/taken over by mostly white and Latino Anarchists."
TRUTH: RED WARRIORS ARE LED BY INDIGENOUS LEADERS WHO TRAIN AND SUPPORT PEOPLE OF ALL RACES THAT ARE COMMITTED TO PROTECTING THE WATER AND DEFENDING THE LAND.

MYTH: "…they were not prayerful."
TRUTH: RED WARRIOR CAMP INNERSTANDS HOYEYA (SENDING VOICE TO CREATOR).
Red Warriors are picking up where they left off in their homelands before they left for Standing Rock. We continue to build alliances with other active indigenous resistance circles.  We are engaged in cultural revitalization activities and youth-led food sovereignty initiatives.
We are actively fighting uranium mining operations throughout Turtle Island and currently conducting radiation testing trainings to empower native communities to collect and own the data to protect their environment.
Red Warriors are mapping "water criminals" that seek to destroy finite water sources throughout Turtle Island.  We call upon communities to study their watersheds including, aquifers, streams, rivers and lakes to determine if they are under imminent threat from companies seeking to control or destroy their water sources.
Importantly, hundreds of tribal nation government leaders traveled to Standing Rock and made pledges to support the protection of sacred water.  We call upon grass roots people to hold their elected officials to their word and share the good work that is being done.
We are cautiously optimistic with U.S. District Judge James Boasberg June 16th ruling against Energy Transfer Partner's Dakota Access Pipeline.
Boasberg ruled, "…the Court agrees that it did not adequately consider the impacts of an oil spill on fishing rights, hunting rights, or environmental justice, or the degree to which the pipeline's effects are likely to be highly controversial.   To remedy those violations, the Corps will have to reconsider those sections of its environmental analysis upon remand by the Court."
Boasberg will rule in the coming days whether to halt the flow of dirty crude during the Army Corps' new environmental impact study on this already leaky 1,172-mile pipeline.
Red Warrior Society's mantra is "Everything for Everyone, Nothing for Ourselves".  We acknowledge the long legacy of warrior societies' continued struggle for indigenous liberation and environmental justice.

For more information, email us at redwarriormedia@gmail.com