The Intercept exposed a blueprint of the intelligence operation at the North Dakota fusion center targeting Standing Rock water protectors, which includes Brenda Norrell, Censored News.
In regard to leaders of the movement at Standing Rock, it is obvious that the intelligence operation did not have a clue as to how the movement began or grew as a global force.
While I am honored to be on the same page with these global heroes, the water protectors of Standing Rock camps, it is disturbing to view how this reporter and Censored News were targeted in this diagram by the fusion center, comprised of multiple law enforcement agencies.
Equally disturbing is the fact that most of those identified were arrested.
Censored News was created in 2006, after I was censored and terminated, without any cause stated, as a staff reporter at Indian Country Today. I had served as a staff reporter for most of the years after it was created in 1995.
Today, Censored News is a service to Indigenous Peoples and others engaged in the struggle for human rights. There are no ads, revenues or salaries. Now in our 12th year, we have 17 million page views.
As a news reporter, I began as a staff reporter at the Navajo Times in 1982. During the 18 years that I lived on the Navajo Nation, I worked as a stringer for The Associated Press for five years, and USA Today for seven years, primarily covering the Navajo Nation government and federal courts.
My work as a news reporter has appeared in Outside magazine and newspapers throughout Indian country and the west.
The intelligence operations targeting Standing Rock water protectors were an attack on peaceful defenders of the land, water and air, and sacred burial places.
Standing Rock water protectors sacrificed personally to protect their drinking water and the Missouri River from the Dakota Access pipeline.
The intelligence operation diagram exposed by The Intercept, and the arrests of journalists, reveal that this United States intelligence operation is part of the ongoing collusion of big oil, big money and law enforcement.
The facts exposed by The Intercept reveal that now, more than ever, is a time for journalists and land defenders to bolt into the global arena and halt the ongoing destruction of the Earth for corporate gain and political expediency.
It is with gratitude to the courage of the water protectors that I write this. I am especially thankful to the photographers, videographers and Standing Rock Spirit Resistance Radio for making possible our coverage at Censored News.
I look forward to the global work ahead.
Brenda Norrell, publisher, Censored News

Excerpt from the article An activist is accused of firing a gun at Standing Rock. It belonged to her love, an FBI Informant, by Will Parrish, The Intercept.

Sara Jumping Eagle, a physician on the Standing Rock Sioux reservation who was among the first DAPL opponents arrested in August, said the heavy-handed law enforcement response at Standing Rock was not altogether surprising. “There’s a long history of the U.S. labeling people who stand up as terrorists, so some of us figured they were gonna use those same tactics against this movement as well,” she said.
Jumping Eagle was among some two dozen activists featured on an early blueprint for the intelligence operation at the North Dakota fusion center, a “links chart on leaders of the movement,” obtained by The Intercept via public records request. The document mapped out connections between DAPL opponents purportedly affiliated with the Red Warrior and Sacred Stone camps, two of the main nerve centers of pipeline resistance on the Northern Great plains. Nearly everyone on the chart is an indigenous person.
. 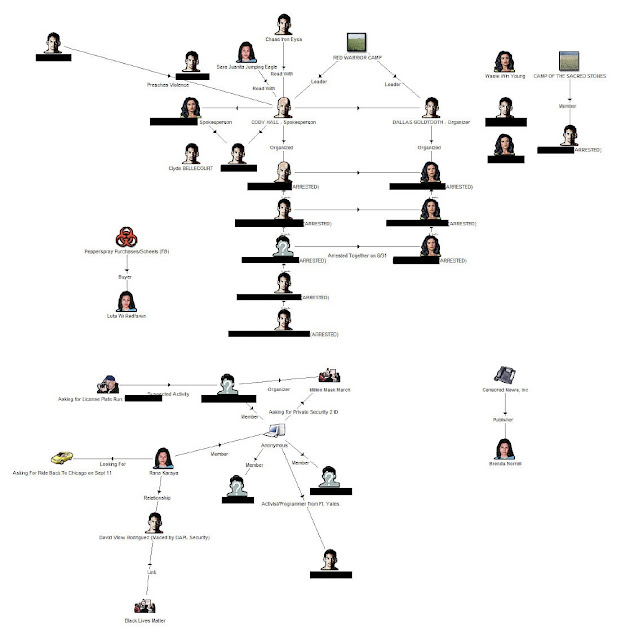