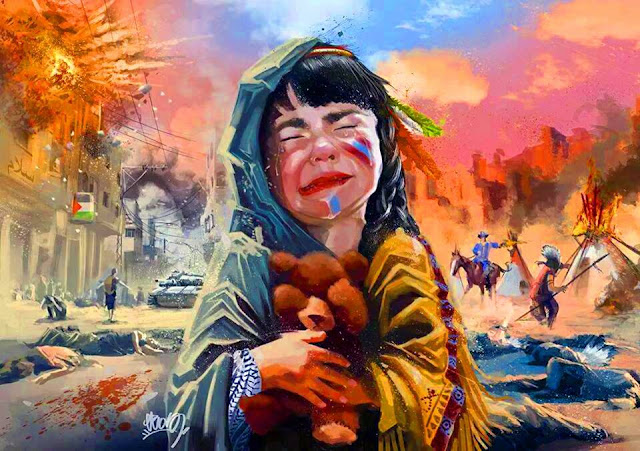 From NM to Palestine: Ending Israel/U.S. Police Exchange, Reclaiming Safety
One of the most dangerous places where the regimes of Trump and Netanyahu converge is in exchange programs that bring together police, ICE, border patrol, and FBI from the US with soldiers, police, border agents, etc. from Israel. In these programs, “worst practices” are shared to promote and extend discriminatory and repressive policing in both countries. These include extrajudicial executions, shoot-to-kill policies, police murders, racial profiling, massive spying and surveillance, deportation and detention, and attacks on human rights defenders. This event will feature Native and Palestinian-American speakers who can testify to the impact of deadly police violence on their communities. We will also discuss what actions activists can take back to their communities to bring an end to this violence.Speakers:MELISSA TSO, advisor to JVP End The Deadly Exchange Campaign and lead organizer in The Red NationJENNIFER MARLEY, lead organizer in The Red NationJEFF HAAS, Santa Feans for Justice in PalestinePalestinian members of UNM Muslim Student AssociationBEKAH WOLF, New Mexico Immigrant Law Center and Steering Committee member for the US Campaign for Palestinian RightsLori Rudolph, Jewish Voice for Peace - ABQRefreshments will be provided! Please consider making a donation at the event, however this is not required to attend.Co-Sponsors: Indigenous Rights Center, Albuquerque Peltier, UNM Muslim Student Association, Jewish Voice for Peace-Albuquerque, and Democratic Socialists of America, Jewish Voice for Peace-National, and Friends of Sabeel.
at January 26, 2018