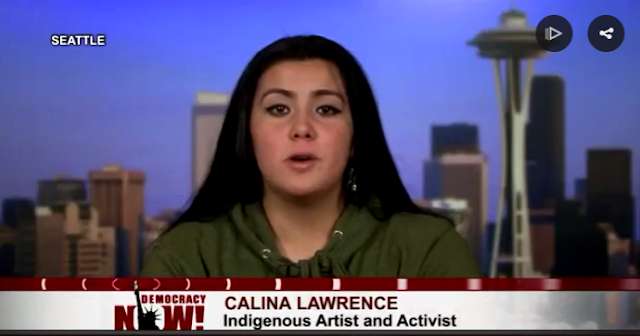 Democracy Now! Time's Up: Meet Five of the Women Who Staged Protest at Golden Globes Against Gender Violence

AMY GOODMAN: If you could speak, Calina Lawrence, about Native American women and what they face? When we talk about rates of sexual abuse, we must multiply this so many times when we talk about Native women, so vulnerable in this country.CALINA LAWRENCE: Absolutely. The violence against Native women is 10 times the national rate. Four out of five women experience violence—excuse me, four out of five Native American women are on the receiving end of violence. I think one in three are exposed to domestic violence. And so, one of the things that we definitely had time to share space about, when we met as a collective group, actually, right before the Globes, was that although we also experience this epidemic in the workplace, we experience it in our home, we experience it on college campuses, we experience it in the streets.
This is an ongoing—obviously, been ongoing since colonial invasion. It’s been ongoing since the boarding school eras, where they stripped our children from families and abused them in religious boarding schools. Those things have been inherited. The patriarchal violence that we’ve been on the receiving end still very much exists today. And so, there’s a lot of work that’s happening, not only around collecting these stories and this information, but really working in the community to shift our psychological approach, to start to ask the comfortable questions and to hold more folks accountable as to what contributes to our dehumanization.And so, Missing and Murdered Indigenous Women USA, Missing and Murdered Indigenous Women in Canada—there are so many different chapters of Missing and Murdered Indigenous Women that are consistently working around the clock. One of the things that is really difficult, obviously, that as sovereign nations and government-to-government relationships, it’s often difficult to really track the actual numbers, because of the fact that most of the time convictions cannot happen on reservations if committed by non-Native violators, and vice versa. A lot of times when Native women are violated off of the reservation, their traumas, their experiences never see investigation, and they rarely have attained justice, right?So, it’s an incredible like necessity to be included in the conversation and say that we have been doing this work for essentially 500 years. And we’ll continue to do this work in solidarity with those who now share this, this—you know, what is now the United States. But they share this land with us, and we’re really honored to offer the resources and the tactics that we have used to women who are doing the same work in their respective communities.

Violence against Native women synonymous with abuse by Big Oil

AMY GOODMAN: Calina Lawrence, I want to ask you about the issue of violence against indigenous women. Democracy Now! recently spoke to Mary Kathryn Nagle, a citizen of the Cherokee Nation, an attorney on tribal sovereignty and jurisdiction. After Olivia Lone Bear, a Native American woman, went missing in the Bakken oil fields of North Dakota. This is what she said.

MARY KATHRYN NAGLE: Amy, this is all too common. And we have the highest rates across the United States, again, in Indian country, of violence, but in particular in North Dakota, where the rates of oil extraction have skyrocketed since 2005 in the Bakken oil boom.

And numerous leaders, both at the state and federal level, have now noticed that North Dakota—some of the towns in North Dakota within the Bakken boom and some within the Fort Berthold Reservation, where Olivia is from, now have some of the highest rates of sex trafficking in the United States.

AMY GOODMAN: That’s Mary Kathryn Nagle, a citizen of the Cherokee Nation, talking about what happened to Olivia Lone Bear. We still don’t know. It has been months. She disappeared, a Native American woman lost in the Bakken oil fields, disappeared in the Bakken oil fields of North Dakota. The man camps she refers to, your activism around oil politics, if you can refer to that and also, even just this week, the multi-day occupation of the Washington state Capitol, with tipis erected on the Capitol lawn, demanding a liquefied natural gas plant be stopped? The connection between violence against women and oil politics in this country?

CALINA LAWRENCE: Absolutely. One of the main things that we have been pushing is that the two are synonymous. The violence against women is synonymous with the environmental injustice that we have been facing. And one of the things that has come out of this, this further analysis of Big Oil, is that it’s a very—it’s a very evident and permanent thing we can point at and say that there is a direct correlation. There’s no way that we can deny that.So, the fact that so many of us have to do both the work against violence and the work in fighting for our land and to preserve our landscape, our resources, our direct sources of life, like water and all of our non-human relatives, who contribute to the entire life cycle of more than just humanity, is something that we continue to push as a narrative, and really recognizing this importance of combining—right?—combining so much of the work that we do. I often talk about the fact that Native people are at an intersection, right? So the reason that I advocate and have to fight for so many different causes is because I’m impacted by all of them. And so, when we can find a way to make those correlations and strengthen our need to be included and our need to be recognized, it really shows that as soon—you know, one of the main things that has come from these incredible, incredible women, you know, the activists who I was just honored to stand beside and learn from at the awards, is the fact that we can come together and find ways to advocate for each other.And I just have to mention, you know, I’m only 24 years old, and I’m still learning so much. And, for me, a lot of the women that we’re talking to today and the women who were at the Globes, they’re my role models, right? They’re people who I look up to in organizing. And the fact that I’m learning so much from them helps me to figure out how to better not only represent, but work in the streets and in the communities.And one of those ways is to—I’ve been participating in the No LNG 253 fight with the Puyallup Tribe and the citizens of Tacoma, who are indeed fighting this 8 million gallon liquefied natural, but fracked, gas facility with a three-and-a-half-mile blast zone. And LNG is very deceiving, right? The idea of natural gas is, is that if it’s fracked, there’s somewhere—there’s a community somewhere, most likely a Native community, who is suffering from those repercussions, right? But also, what do we do? What do we do when it explodes? They have previously built a similar facility, and it has exploded.And so, now you’re—for one, you’re violating the supreme law of the land, which is—which all treaties in the United States are the supreme law of the land. And so, any time that any Big Oil or any corporation is not in communication with Native tribes, you are violating and breaking the law. And besides that, there are non-human relatives who are at stake, are the quality of our water, our salmon, our killer whales. Just so many different vital parts of the cycle of life are at risk. For what? Right? We know that there are more sustainable ways to live. And so, this is similar to Standing Rock, where the facility is continuing to be built without permits and without consent, improper communication with tribal leadership for government-to-government sovereign rights. And because of this, it’s an ongoing attack on our legitimacy, but also on Mother Earth and all of the sources that we need in order to exist and preserve and persevere.So, there is a direct correlation between environmental injustice and violence against women. And until we can really sit down and continue conversations like this, that address that very—that reality for the most marginalized, the most vulnerable, which, in my experience, is Native American women and LGBTQ and children—now that we’re included in the conversation on this level and we are able to continue to build, to use tools and build, we have a real shot at redefining our humanity and redefining how we exist and coexist with Mother Earth.

Censored News is published by Brenda Norrell. Since 2006, Censored News has received more than 20 million pageviews. As a collective of writers, photographers and broadcasters, we publish news of Indigenous Peoples and human rights. Contact publisher Brenda Norrell: brendanorrell@gmail.com
<