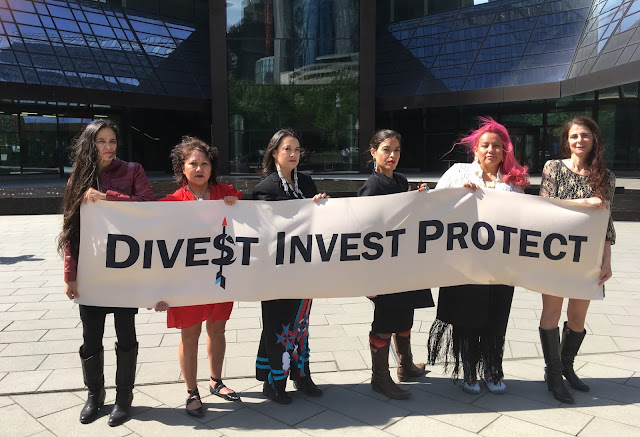 ZURICH, Switzerland (May 3, 2018) - Over the past week, the third Indigenous Women's Divestment Delegation to Europe was present in Switzerland and Germany - working to expose harms and injustices, and engage in high-level meetings with Credit Suisse, UBS, Deutsche Bank, and Swiss government officials, during which Delegates demanded adherence to the standards of Indigenous rights and human rights law, and meaningful action to divest funds from the fossil fuel companies pushing unwanted extractive development in Indigenous territories, while further endangering the global climate.

Mohawk Nation News
MNN. May 3, 2018. Bad deeds always come back to destroy the perpetrator. The invaders mass murdered us. This curse hangs around their necks.
Read article at:
http://mohawknationnews.com/blog/2018/05/04/twisted-git-git-coming-home-to-roost/
at May 04, 2018 No comments:

Mohawk Nation News
MNN. May 2, 2018. The crashers of the Assembly of First Nations AFN private party at the casino in Hull was a corporate meeting. At the front sat the main shareholders and microphones on the floor for a few predetermined questions from sell-out chiefs.
Read article at MNN:
http://mohawknationnews.com/blog/2018/05/02/afn-give-away-party-crashed/