Mayan Woman Murdered by US Border Patrol on Texas Border 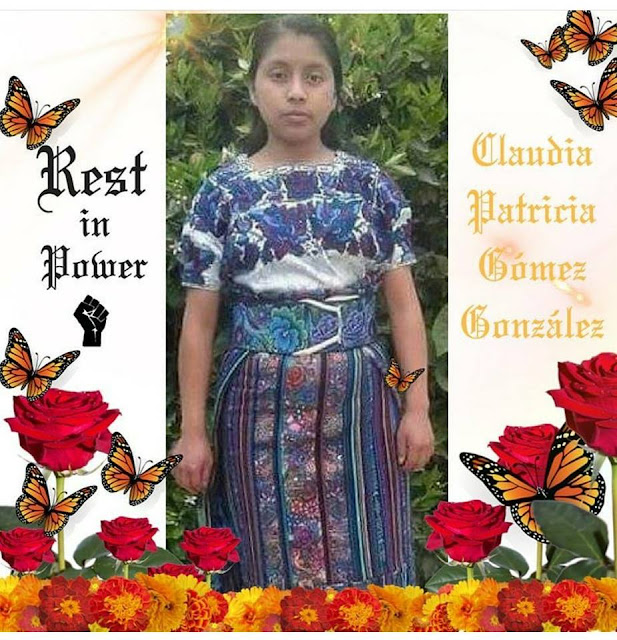 An eye witness said Claudia was hiding in the bushes when she was shot in the head and executed by a US Border agent.


Immigrant rights groups across the United States have condemned the killing of a young unarmed Guatemalan woman who was shot by a border patrol agent in Texas.
The woman, identified as 20-year-old Claudia Patricia Gomez Gonzales, was shot in the head by a Customs Border Police (CBP) agent on Wednesday in Rio Bravo, Texas, close to the border with Mexico.
According to local media, quoting Gonzales' family, the young woman was travelling to the US from a small village in Guatemala to find work to pay for her education.
https://www.aljazeera.com/news/2018/05/indigenous-guatemalan-woman-shot-dead-border-patrol-180526081614753.html
at May 27, 2018 No comments:

Please post & distribute.
MNN. May 27, 2018. Chucky, the Killer Doll, was asked, “Why do you kill?” He answered, “It’s a hobby. It helps me to relax”. She asked, “Am I going to be a killer?” Chucky answered, “Of course! It’s been a family tradition for generations.” She asked, “But violence is bad. Isn’t it? We have a problem with killing.”  Chucky commented, “We don’t have a problem with killing. I like a little killing now and then. What’s wrong with that? Killing is an addiction like any other drug.” Question, “Chucky, quit right now. Go cold turkey!” Chucky replies, “You have got to be kidding!” Read article:
http://mohawknationnews.com/blog/2018/05/27/chucky-face-of-america/

This photo is of The Cage, the sweltering inhumane outside detention center used by the US Border Patrol on the Tohono O'odham Nation in the Sonoran Desert, where temperatures can surpass 115 degrees in summer.
When Mohawks came here in 2007, they were joined by Lenny Foster, Dineh, who said this was no more than a "dog cage."
This cage was not operating the last time we were there, but these cages are still used, to cage migrants, as they were used by Morton County, North Dakota, Sheriff Kyle Kirchmeier to cage Standing Rock Water Protectors who were jailed for praying for the water.
The Mohawk Warriors found it hard to believe that the Tohono O'odham tribal government allowed the US Border Patrol to be present on their land, and to carry out horrific abuses against migrants and Tohono O'odham.
Today, the cages are used in private prisons to cage migrants, including children, and the US Border Patrol is considered an "occupying army" by many O'odham, as agents carry out horrific abuses on the Tohono O'odham Nation. 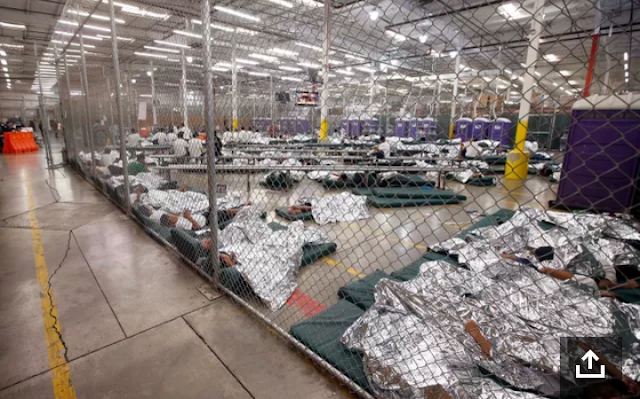 NEW REPORT IS BASED ON THOUSANDS OF GOVERNMENT DOCUMENTS OBTAINED THROUGH THE FREEDOM OF INFORMATION ACT THAT DETAIL HORRIFIC STORIES MAY 22, 2018 WASHINGTON —

Documents obtained by the American Civil Liberties Union featured in a new report released today show the pervasive abuse and neglect of unaccompanied immigrant children detained by U.S. Customs and Border Protection. The report was produced in conjunction with the International Human Rights Clinic at the University of Chicago Law School. “These documents provide a glimpse into a federal immigration enforcement system marked by brutality and lawlessness,” said Mitra Ebadolahi, ACLU Border Litigation Project staff attorney.
“All human beings deserve to be treated with dignity and respect regardless of their immigration status — and children, in particular, deserve special protection. The misconduct demonstrated in these records is breathtaking, as is the government’s complete failure to hold officials who abuse their power accountable. The abuse that takes place by government officials is reprehensible and un-American.” The report is based on over 30,000 pages of documents dated between 2009 and 2014. The documents were obtained by the ACLU Foundation of San Diego and Imperial Counties and the ACLU Foundation of Arizona through a Freedom of Information Act lawsuit co-counseled with Cooley LLP. The documents feature numerous cases of shocking violence and abuse against migrant children, many of whom arrived in the United States fleeing violence in their home countries. “The students reviewing these records were shocked by the abuse and neglect these children were subjected to at the hands of U.S. officials.
The fact that these children were already so vulnerable — most traveling alone in hopes of escaping violence and poverty in their home countries — made the unlawful and inhumane actions reflected in the documents even more distressing,” said Claudia Flores, faculty director of the International Human Rights Clinic at the University of Chicago Law School.
Law students in the International Human Rights Clinic examined a subset of the records obtained.
The documents show numerous cases involving federal officials’ verbal, physical and sexual abuse of migrant children; the denial of clean drinking water and adequate food; failure to provide necessary medical care; detention in freezing, unsanitary facilities; and other violations of federal law and policy and international law.
The documents provide evidence that U.S. officials were aware of these abuses as they occurred, but failed to properly investigate, much less to remedy, these abuses.
Examples of the documented abuses include allegations that CBP officials: Punched a child’s head three times Kicked a child in the ribs Used a stun gun on a boy, causing him to fall to the ground, shaking, with his eyes rolling back in his head Ran over a 17-year-old with a patrol vehicle and then punched him several times Verbally abused detained children, calling them dogs and “other ugly things” Denied detained children permission to stand or move freely for days and threatened children who stood up with transfer to solitary confinement in a small, freezing room Denied a pregnant minor medical attention when she reported pain, which preceded a stillbirth Subjected a 16-year-old girl to a search in which they “forcefully spread her legs and touched her private parts so hard that she screamed” Left a 4-pound premature baby and her minor mother in an overcrowded and dirty cell full of sick people, against medical advice Threw out a child’s birth certificate and threatened him with sexual abuse by an adult male detainee.
The report also shows evidence of CBP holding migrant children in excess of the 72-hour maximum period permitted by law, as well as officials’ efforts to deport children without due process and via coercion.
“It’s terrifying to think that the horrible abuses described in these documents can continue and perhaps worsen under the Trump administration,” said Astrid Dominguez, director of the ACLU Border Rights Center.
“It’s unacceptable that there are no mechanisms in place to shed light on CBP’s abuses and ensure accountability.”
The report provides an overview of key trends that converged to create a crisis of migrant child abuse in CBP custody, the largest federal law enforcement agency in the United States. The documents obtained from the government show no evidence that any of the abuses detailed therein were ever meaningfully investigated, much less that the officials responsible were held accountable. The ACLU of San Diego & Imperial Counties launched a new website which includes the CRCL documents, and a timeline of the Border Litigation Project’s efforts to obtain these crucial documents from the government over the past four years.
Certain personally identifying information — such as the names of government officials, migrant children, and other third parties — has been withheld from the records released in response to the ACLU’s FOIA request and subsequent litigation. More information on the report and documents is available here: https://www.aclusandiego.org/civil-rights-civil-liberties/
at May 27, 2018 No comments: