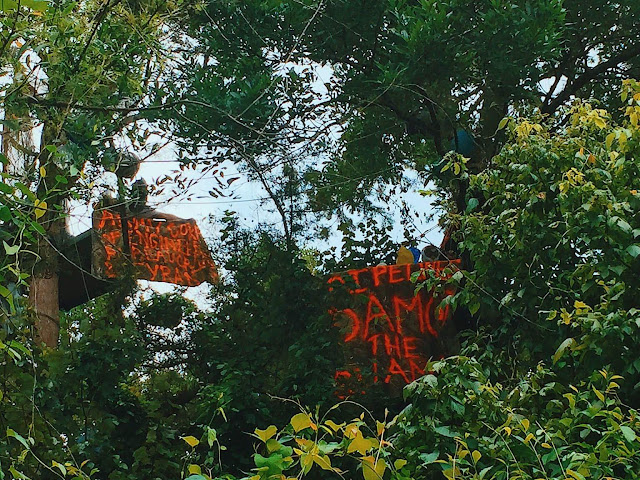 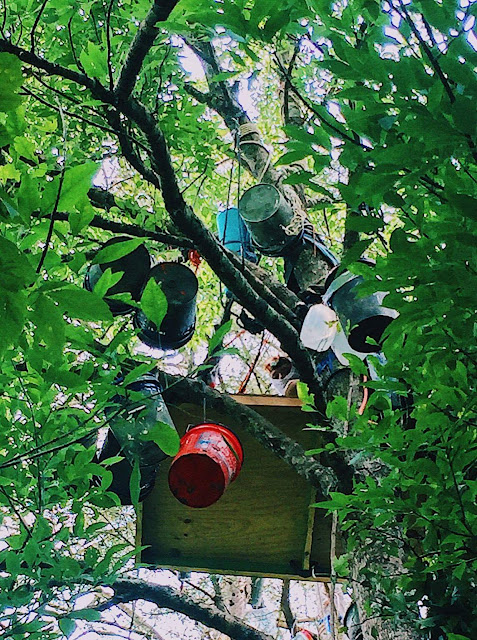 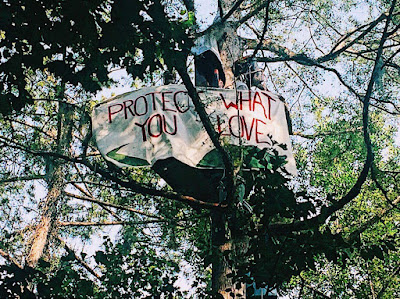 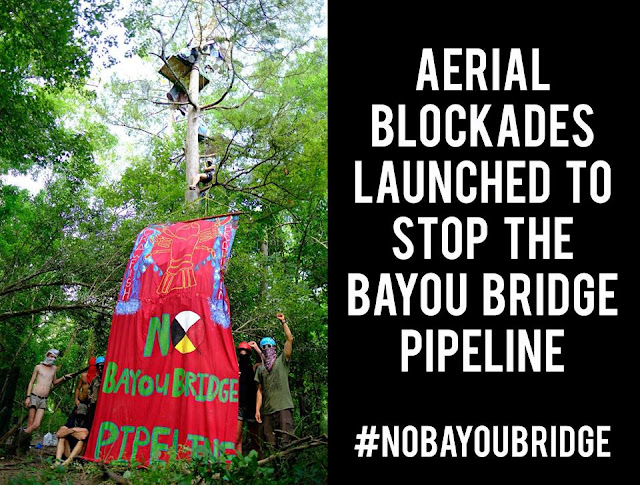 BREAKING.
Deep in the Atchafalaya Basin, one of the largest swamps in North America, aerial blockades have been established directly on the path of the Bayou Bridge Pipeline.
Water protectors are currently occupying multiple tree-sits on the pipeline easement.
We have petitioned, filed lawsuits and demonstrated. We have carried our nearly 50 worksite actions. But despite these efforts, construction of the Bayou Bridge Pipeline has continued. We are left with no other choice but to put our bodies, and our lives on the line to stop this pipeline.
The tree-sitters and their support team are living in inhospitable conditions, with limited resources and under close watch of Energy Transfer Partners. THEY NEED YOUR SUPPORT.
Show your solidarity for those fighting on the frontlines, organize a solidarity action during the #RiseTogether Weeks of Action which kicks off today: www.NoBayouBridge.global/risetogether
During these Weeks of Action we are asking folks to target these banks which finance Energy Transfer Partners and other major pipeline companies:
Bank of America
Citi Bank
JP Morgan Chase
Wells Fargo
Bank of Tokyo
Credit Suisse
Royal Bank of Canada
Censored News

Leonard Peltier's Unit out of Lockdown 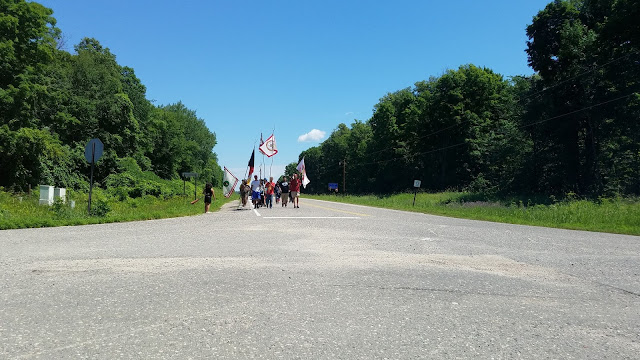 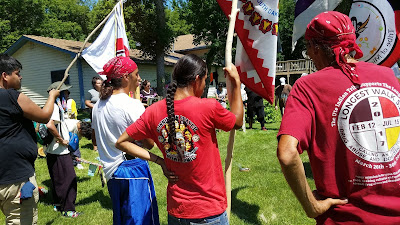 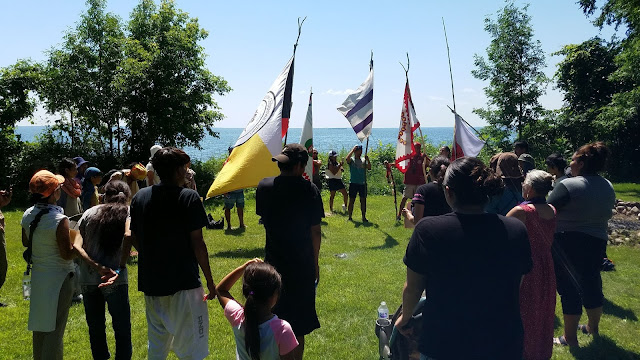 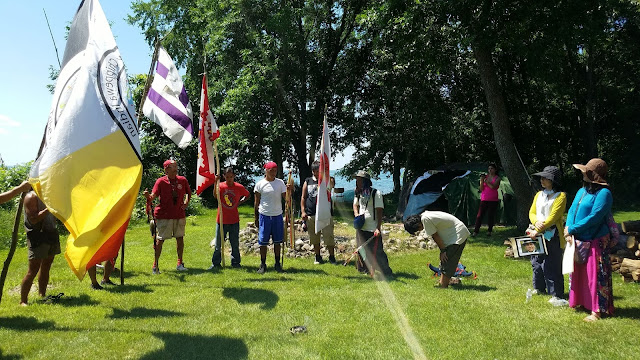 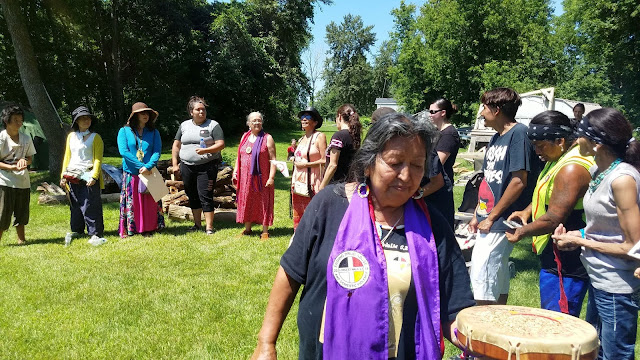 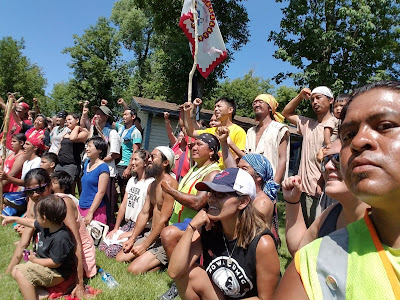 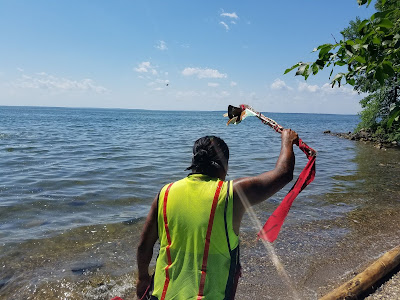 Bad Bear said, "In the circle I spoke up, Carl Bad Bear Sampson Representing Reno AIM/ NORTHERN NEVADA CHAPTER The Great Basin / Brenda Norrell Censored News showing Love and Support to the Bank's family."
(Photo below Waabooz Banks and Bad Bear) "This is Waabooz Banks. Mr. Banks is my grandpa. I wanna say I not only walked for my grandfather, but for all the people, because my grandpa helped and did work for the people. It's an honor to be his grandson and to help my people." 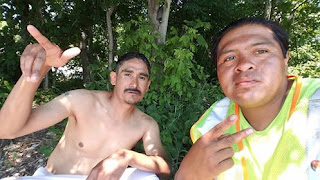 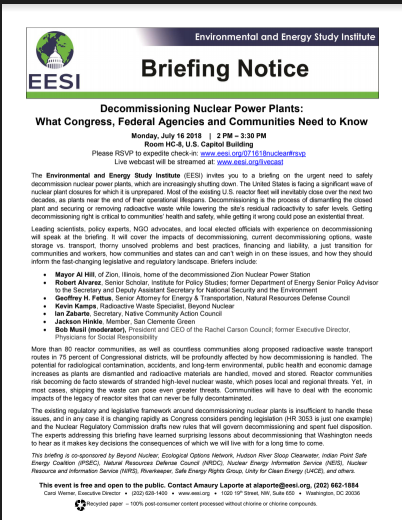 SECWEPEMC 'Arrest of Tiny House Warrior is Declaration of War' 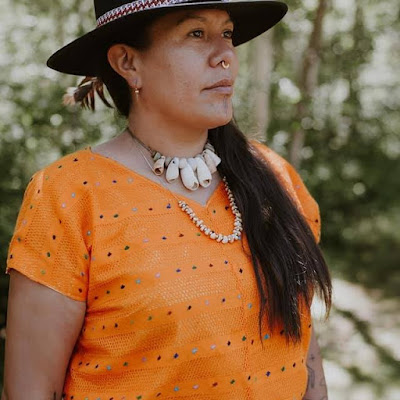 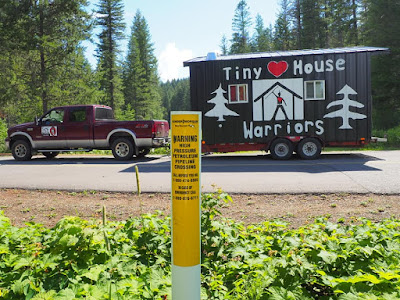 Saturday July 14, 2018 - The Secwepemc Women's Warrior Society is outraged at the arrest of Kanahus Manuel. This morning Kanahus Manuel was arrested by the RCMP, an occupying force that has been criminalizing Indigenous peoples on our own lands and forcing us onto reservations since contact.
Last week the Tiny House Warriors reclaimed an ancestral village to block the planned route of the Trans Mountain Expansion pipeline. We are currently building solarized Tiny Houses on our land to block Kinder Morgan. By doing this, we are providing housing to Secwepemc families, re-establishing our village sites, and asserting our Secwepemc responsibility to our lands and waters.
As Secwepemc women, we will resist construction on the North Thompson line of the Trans Mountain Expansion pipeline, which is expected to begin by the fall. We are re-establishing a permanent village on our land that the pipeline is trespassing without our consent. We have never provided and will never provide our collective free, prior and informed consent - the minimal international standard - to the Kinder Morgan Trans Mountain Pipeline Project or the Man Camps. We are taking a stand against the destructive, genocidal, and assimilative forces that have been visited upon us by colonial Canadian governments since first contact.
We have faced intimidation by the white supremacist RCMP and Park ranger goons of the Canadian state who want us removed from our own lands. We are on Secwepemc lands that neither the federal government nor provincial government has any jurisdiction on. While there is much talk by the federal government about respecting Indigenous rights and reconciliation, the Trans Mountain buy-out expansion and arrest of Secwepemc woman warrior Kanahus Manuel is a declaration of war.
We are Secwepemc women. We are still here. We are unafraid. We carry the waters of our lands within us. We are guided by the warrior spirit of our ancestors. We will defend our lands and lives by any means necessary!
- STATEMENT BY SECWEPEMC WOMEN'S WARRIOR SOCIETY
Saturday July 14, 2018
Unsurrendered Secwepemc territories

Update: Sunday, July 15, 2018
Yesterday was a beautiful day in our Secwepemc homelands. After being forcibly removed and arrested by the RCMP and state agencies, our Tiny House Warriors village was forcibly displaced to the side of hwy 5, 3 km south of the Secwepemc village site where assertion of title to our ancestral village site took place through 7-days of ceremony.
The RCMP and BC park rangers guarded the gate so no one could return. This is so reminiscent of the days when Canada displaced us from our Secwepemc villages the first time, into modern day concentration camps, the Indian Reserves of Canada, forcing us into 0.2% of our traditional homelands. As we gathered on the a small strip, the shoulder of the road, we laughed, we drummed and sang songs and we planned to move north. Is this what Canada has done to us, has made our Secwepemc village site not accessible to me, forcing me to sign under duress conditions that are just like the racist laws in the deep south, "whites ONLY", the conditions to not go back to my Village, my home, our land is our home, can't seperate them. We have made it to our new home and we are here to address Canada we are here to address Trudeau, you have never responded to my Father Arthur Manuel letter to you, he told and I have told you, you do not have consent from our collective Secwepemc Nation. Tiny House Warriors are now in Blue River at the site of the proposed Blue River Man Camp, in which BC oil and gas commission eagerly issued this illegal permit to construct this man camp to house 1000 transient industry men. These man camps have been documented to increase the violence against women, including rapes. Communities around the man camps in North Dakota have increased rapes per year drastic increase from 20 rapes to 200+ rapes per year. The increase of violence against women with the threat of Kinder Morgan man camps is imminent, and it is imperative that we stand up and stop these Trans Mountain pipeline man camps. We will defend our women and girls, over 5000+ concerned Women, Indigenous Peoples, organizations and Canadians have signed onto the Women's Declaration Against Kinder Morgan Trans Mountain man camps. Please join the call to take action against these man camps that threatens increased violence against women and our unceded lands.
Canada's Trans Mountain Kinder Morgan man camp locations:
Clearwater
Blue River
Valemont
Please join us, you can find us at the proposed Trans Mountain Kinder Morgan man camp location @ Blue River
52°06'59.4"N 119°18'32.7"W
For more information www.secwepemculecw.org
www.tinyhousewarriors.com

Mohawk Nation News
MNN. JULY 14, 2018. Yes, in 1990 we unwrapped the corporate ropes from our necks! “On July 11th 1990, the Surete du Quebec [Quebec Provincial Police] opened fire with automatic guns and tear gas on kahnienkehaka [Mohawk] men, women and children. The Mohawks had been protesting the town of Oka’s plans to expand a golf course over a burial ground and common native land called The Pines kanehsaktake. Nearby Mohawks of kahnawake responded very quickly to fellow Mohawks of kanehsatake by blocking the Mercier Bridge, which connects the southshore to the island of Montreal.
Read article at Mohawk Nation News
http://mohawknationnews.com/blog/2018/07/14/tribute-to-men-women-children-friends-allies/
at July 16, 2018 No comments: