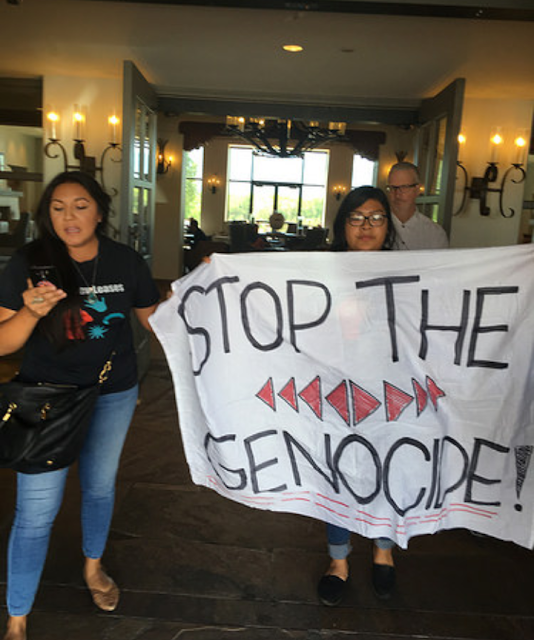 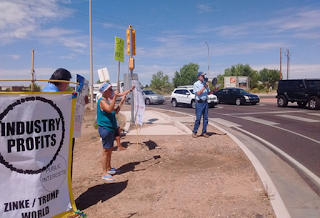 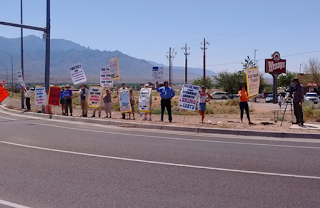 Press contact: Julia Bernal, Pueblo Action Alliance , julia.f.bernal@gmail.com, puebloactionalliance@gmail.com, Rebecca Sobel, WildEarth Guardians, rsobel@wildearthguardians.org, Video: https://www.facebook.com/puebloactionalliance/videos/1567266396914452/Photos to be posted: https://www.flickr.com/photos/wildearth_guardians/ SANTA ANA PUEBLO, NM, US: The annual Convention of Western Attorneys General Conference (CWAG) scheduled Fireside chat with Department of Interior Secretary Ryan Zinke was met with disruption from activists who demanded the Secretary finally listen to public concerns regarding his administration's crusade to hand over America’s public lands and resources exclusively to fossil fuel industries. Closed to the public and the press, the event was meant to avoid citizen engagement, a theme of Zinke’s tenure at the Department of Interior. From reducing public comment periods and condemning scientific and social analyses to gutting National Monuments and Endangered Species protections, the Trump administration and Secretary Zinke have shown time and again that industry voices are more important than public health and safety, clean air and water, indigenous sovereignty and tribal consultation, our environment, and our increasingly warming climate. New Mexico has been a recent target for industrialized fracking, climbing the ranks of oil and gas producing states, as more and more public lands in iconic areas of Greater Chaco and Carlsbad Caverns are sold to the oil and gas industry for as little as $1.50 per acre. Failing to acknowledge unprecedented  public and tribal opposition, Zinke continues to auction off more land in Northeast and Southwest New Mexico for unfettered fracking. His administration's systemic efforts to ignore public engagement have compelled activists today to bring their input directly to the Secretary. Wearing #NoNewLeases t-shirts, two Indigenous activists attempted to infiltrate the meeting during Zinke’s presentation, unfurling a banner that read “Stop the Genocide” and reciting key policies to remind the Secretary of the duties he is meant to uphold, before being escorted out of the room by hotel security and Santa Ana police.  Statement from activists:“Today’s event is evidence of the extreme efforts Secretary Zinke will take in order to avoid any public engagement or accountability. That Indigenous people are not welcome on our own land while Zinke’s administration freely sacrifices our future generations to feed the greed of corporate cronies in the fossil fuel industry is not only disrespectful, it’s deplorable. We may have been escorted out today, but we will not stop in our efforts to hold this administration accountable in its duties of protecting public health, our environment, and the rights of Indigenous peoples. Respect Existence or Expect Resistance.”  Statement read by activists:The Department of the Interior protects and manages the Nation's natural resources and cultural heritage; provides scientific and other information about those resources; and honors its trust responsibilities or special commitments to American Indians, Alaska Natives, and affiliated island communities.The United Nations Declaration on the Rights of Indigenous Peoples Article 32 states Indigenous peoples have the right to determine and develop priorities and strategies for the development or use of their lands or territories and other resources.Article 19 States shall consult and cooperate in good faith with the indigenous peoples concerned through their own representative institutions in order to obtain their free, prior and informed consent before adopting and implementing legislative or administrative measures that may affect them.Environmental justice is the fair treatment and meaningful involvement of all people regardless of race, color, national origin, or income with respect to the development, implementation and enforcement of environmental laws, regulations and policies.Fair treatment means no group of people should bear a disproportionate share of the negative environmental consequences resulting from industrial, governmental and commercial operations or policies.Santa Ana police stationed a checkpoint two miles away from the hotel, turning back citizens who wanted to peacefully demonstrate at a planned event in the hotel parking lot. Relegated to the corner of Hwy 550 and Tamaya Blwvd, close to 50 activists rallied with signs and banners to call on stronger leadership from Zinke’s Interior. Additional Quotes:“Ninety one percent of available public land in Northwest New Mexico has already been leased for the extractive operations. Over 500 new horizontal wells have been approved without proper planning, accurate cultural assessments or analysis. And while this activity is continually occurring, Tribal voices and all Tribal Nations who have spiritual and cultural claim to the land have not been heard. Zinke thankfully deferred a lease sale scheduled for March 2018 due to the need for additional analysis of these cultural resources, but this analysis has not yet occurred and new drilling continues.” - Reyes Devore, Pueblo Action Alliance“Secretary Zinke shouldn’t be surprised at his unwelcome greeting in New Mexico. The Secretary has continuously disrespected and disregarded tribal concerns and public input regarding his administration’s intent to allow extractive industry to run roughshod over our public resources.  Despite being physically removed today, we will continue to demand the Secretary hear the voices of the public as loud as industry insiders and we will be relentless in holding him accountable to representing the American people instead of corporate interests.”- Rebecca Sobel, WildEarth Guardians Climate and Energy Senior Campaigner   “We are here to reassert our demands directly to the Secretary related to Greater Chaco Landscape protection. We still demand a moratorium on fracking pending completion of adequate Resource Management Plans that consider the health and social impacts on communities and plans to justly transition to more sustainable local economies. We still demand that BLM engage in Tribal Consultation and most importantly, obtain free, prior, informed consent from ALL tribal nations who have spiritual claim to the region. We demand #NoNewLeases across the Greater Chaco Landscape, to retire non- producing and expired leases and begin to restore the balance for this sacred region.” Julia Bernal, Pueblo Action Alliance“350NM demands a fast and just transition to 100% clean renewable energy and to spend not one penny more for coal or gas fired electricity.  We call to strictly regulate and stop methane leaks from natural gas production and stop sacrificing indigenous and rural communities, like the Greater Chaco area, to fracking." Delese Dellios, 350 New Mexico, 505-688-5343
at July 24, 2018 No comments: