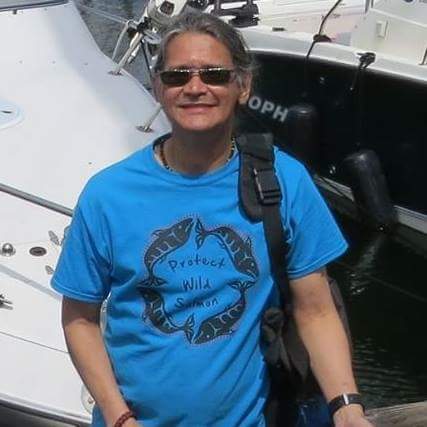 Update Aug. 1, 2018 -- Larry Commodore's foot was injured
when Israeli military violently attacked the Freedom
Flotilla to Gaza boat on Sunday. Larry spent one night in the
hospital before being transferred to Givon Prison in
Israel, where Larry remains imprisoned, the Flotilla
spokesperson told Censored News.

SOS – Release Larry NOW
#SOSjustfuture4Palestine
I’m joining the Canadian Boat to Gaza; challenging the illegal Israeli naval blockade, showing solidarity to the Palestinians suffering under the brutal Israeli occupation… and I’m scared.
It comes to me in the quiet of the night. A visceral image of my mortality flashes across my mind, then my heart starts thumping away.
Thankfully, these episodes have been brief and infrequent. So certainly I’m not paralyzed by fear; my resolve has not been broken.
I think it has more to do with what we Stó:lō people call Shxweli or “life force”; the primordial life instinct that insists that you must avoid death.
Of course, there’s only a slight possibility that our mission will come to a violent end. But it’s a possibility that’s hard to ignore.
The most probable outcome is that we will be illegally apprehended by the Israelis in international waters, put in an Israeli jail and then deported back to Canada,
The desired outcome is that we deliver our humanitarian aid directly to the Palestinians of Gaza and that we move substantially toward a “Just Future for Palestine”.
There should not be a world where violence and injustice exist to the extent and duration as it has in Palestine; inflicted by one of the most powerful military forces in the world, backed by the most powerful military force in history.
But this is the world we live in; this is our world.
And because it is our world; it’s we grassroots people worldwide who must take up the struggle for peace and justice; which is a fundamental tenet of the mission to Gaza. This is a grassroots effort. This is part of the struggle for peace and justice.
I am an Indigenous person of this land showing solidarity to Palestinians, who are indigenous to their land on a part of the earth far from here.
So this is also a mission of Indigenous solidarity.
As Indigenous peoples; we know loss, we know dispossession. We know violence; we know injustice. We know genocide.
We know, too, that the will of our people will not be bent by a larger force. We will not be defeated! We will always rise up!

Read Larry's statement on why he went on the Freedom Flotilla: https://jfp.freedomflotilla.org/participants/larry-commodorehttps://www.youtube.com/watch?v=fwYqPXJ8LoA 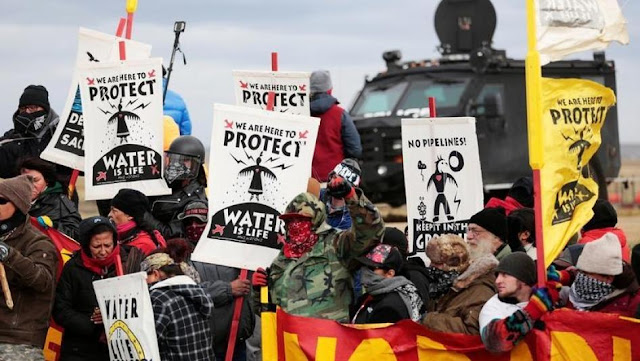 By Water Protector Legal Collective
Censored News
MANDAN, North Dakota -- During the first week of August, legal workers from Water Protector Legal Collective will be present at tribal gatherings throughout the Dakotas to meet with Water Protectors wishing to resolve outstanding warrants issued in connection with their NoDAPL activities in North Dakota during 2016-2017. As the criminal cases being prosecuted in state court wind down next month, the collective is stepping up its outreach so Water Protectors can access resources for legal representation, travel, housing and lodging in Morton County, before August 31, while they are still available.
“We want to be available to speak in person, especially with those Water Protectors who may have doubts about negotiating the criminal justice system, or who may not know who we are,” said Mary Redway, a paralegal who’ll be part of WPLC’s outreach efforts at the Akíčhita Hanska Wačhípi in Fort Yates, ND, August 3-5.
Ideally, WPLC would like to bring to conclusion all 838 cases in which Water Protectors have faced criminal charges in North Dakota, the overwhelming majority of which have ended in dismissal, pre-trial diversion, plea agreements and acquittal. Only 17 cases have resulted in convictions, and six of those are currently under appeal.
“At least 50 people were recharged and immediately given warrants stemming from mass arrests, October 22nd, for example; therefore there’s a sizable amount of people who are under the impression that their case was dismissed,” said WPLC’s defense coordinator Jess Fuller, referring to the 104 warrants that have been issued for Water Protectors from 25 states. Having an outstanding misdemeanor warrant can put Water Protectors at risk for arrest and detention in any state in the United States. Moreover, having outstanding cases and warrants has already negatively affected some Water Protectors’ ability to secure employment, cross international borders and can complicate U.S. citizenship status.
Staff hopes to have informal face-to-face conversations in a relaxed, familiar setting in which they can explain what Water Protectors can expect if they return to Morton County to resolve the warrants, and also try to facilitate legal representation for those facing warrants so that they might avoid returning to North Dakota altogether.
“We’ve been able to resolve over 200 cases with pre-trial diversions,” Fuller explained. “In diversions you’re never asked to enter a plea of guilty, and as long as you don’t break the law for an agreed-upon time, the record of the arrest goes away.”
The schedule for the WPLC Warrant Outreach Tour is:
August 2—9am to 3pm at Oglala Lakota College Paha Sapa Location, Rapid City, SD
August 3 and 4 —12-5pm—Oglala Nation Wačípi, Rodeo and Fair, Pow-Wow Grounds in Pine Ridge, SD
August 4 and 5—2-6pm Akíčhita Hanska Wačhípi at Long Soldier Pow-Wow Grounds, Fort Yates, ND
Fuller hopes Water Protectors will stop by the WPLC tables or contact the hotline at 701-566-9108 to arrange another meeting place. “Either way, if Water Protectors aren’t sure if they have an open warrant, we’ll look it up and give them a solid answer on the spot,” she said.
All Water Protectors wishing to inquire about resolving open warrants are encouraged to call the hotline no matter where they reside.
Censored News

Zapata lives! Zapatista Army Squadron 421 disembarks in Galicia to begin its European tour The delegation was received by an assembly of col...