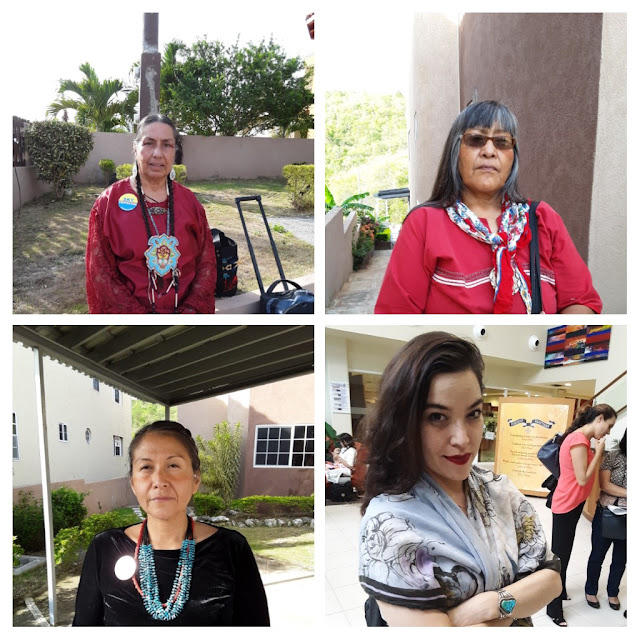 KINGSTON, Jamaica -- The Inter- American Commission on Human Rights heard testimony from Leoyla Cowboy, Dine', as a Native women's delegation delivered powerful testimony of abuse by police and the criminalization of water protectors.

Leoyla said there are currently five Indigenous Water Protectors who are in federal prison, or are on probation or parole, as a result of federal convictions.

Casey Camp, Ponca Tribal Councilwoman, told of how she and other water protectors were caged in dog cages on a concrete floor after prayers at Standing Rock. Casey  described the suffering and misery caused by the extractive industries.
Casey described how the Morton County jailers wrote numbers on their arms as was done to the Jews on their way to the gas chambers.
The water is being poisoned by the extractive industries and the earthquakes they cause in Oklahoma, and it is being poisoned by carbon trading, she told the Commission.
When she went to Standing Rock, it was to protect the water of her people and all life forms downstream.
Now, Ponca have recognized the Rights of Mother Earth, which will have standing in the courts, she told the Commission.
It was the result of prayer that led her to Standing Rock to protect the water. When she arrived at Standing Rock, police descended on the women, men  and children with armed personnel, sound canons, and pepper spray, and imprisoned them in dog cages. Children who were diabetics were denied medicine and went into seizures, she told the Commission.

Ofelia Rivas, O'odham founder of O'odham Voice Against the Wall, spoke of the abuse of Tohono O'odham at the border on sovereign land. Ofelia described how she and other O'odham have been brutalized and terrorized by the U.S. Border Patrol in their home communities.
She told of O'odham attacked by dogs and detained without charges.
"The Tohono O'odham have been criminalized by the U.S. Homeland Security," she told the Commission.
Ofelia described how O'odham lands in Mexico have been stolen, sold and taken over by the cartels.

Michelle Cook, Dine' lawyer and  founding member of Water Protector Legal Collective, described the criminalization of peaceful Water Protectors.
Michelle detailed the actions in the United States to criminalize water protectors resulting in widespread new state laws, as a result of the protection of the water at Standing Rock. Peaceful protesters are now being targeted by new state laws. New legislation in South Dakota criminalizes peaceful protesters and allies and labels them as "riot boosters."
In Texas, new legislation could result in felony charges for those exercising free speech.
Michelle told the Commission that the Water Protector Legal Collective is pursuing a class action lawsuit over the police abuse at Standing Rock.
Michelle is founder of Divest, Invest, Protect, which supported the women's delegation to the hearing.

Responding to the abuse by police and U.S. Border Patrol agents, one Commissioner said, "How could this happen?"

Responding to questions from the Commission, Leoyla said Little Feather has gone through 14 lockdowns. Since the family is unable to contact him during those times, "We don't know if he is alive or dead."
Casey said she and other Native elderly still suffer from the.injuries from the arrests and imprisonments by Morton County Sheriff Department in North Dakota and the police and military who carried out the abuse at Standing Rock.
"We all suffer from post traumatic stress syndrome."

The United States sent officials from the U.S. Embassy and U.S. State Dept. in Washington and Jamaica to respond during the one hour hearing, held at the University of West Indies.
In a failed attempt to present the U.S. as law abiding, U.S. officials did not  provide any testimony that would justify the abuse by U.S. police and military or the injustice by the U.S. courts.
The U.S. did describe the legal action against the private mercenaries, referring to TigerSwan, who operated without a license in North Dakota.
The U.S. officials claimed that the U.S. honors and respects tribal sovereignty, but water protectors point out that the actions of the United States prove otherwise.
U.S. officials said at the hearing, that the Commission was "incompetent" and the U.S. did not have to abide by it.

Michelle said, "Of the 836 North Dakota state court criminal cases, 392 were dismissed, 42 were acquitted at trial, 188 agreed to accept diversion, which resulted in dismissal of those cases, 146 accepted plea agreements involving no jail time (primarily to avoid having to return to court from out of state), and 26 were convicted, of whom only one person served any jail time.
"There are 42 cases remaining on inactive status. Many of the criminal cases should never have been brought or continued due to lack of evidence and witnesses, lack of probable cause and legal defenses of privilege and lawful conduct."

"In the case of the Dakota Access Pipeline, during the seven months from September 2016 to February 2017, at least 76 law enforcement agencies, 35 federal agencies, and private security firms hired by the oil company were present at some time.

"Many of the arrestees were detained under abusive conditions, subjected to unnecessary strip searches, and bussed to jail hours away from their camps in humiliating conditions. Local authorities prosecuted criminal charges against all of those arrested, despite the fact that there was no probable cause to support the vast majority of the arrests and no evidence to prove almost any of the charges," Michelle said.

Wado, Brenda for your courageous reports.

Lifting your diligent work up to the Universe!

Lifting up your diligent and perseverance up to the Universe.