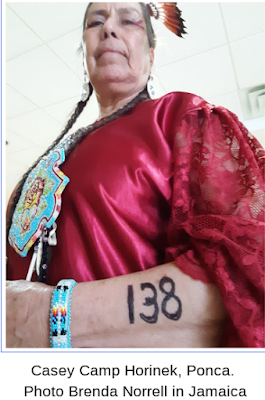 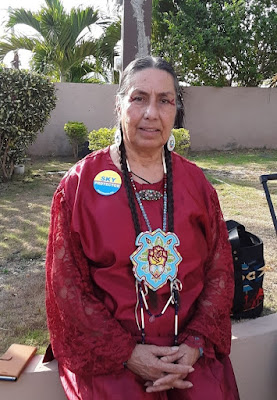 "They zip-tied us. They put us on the ground and hauled us in buses to the basement of the Morton County Jail and imprisoned us in dog cages, after they wrote numbers on our arms like the Jews going to gas chambers."  -- Casey Camp, Ponca

KINGSTON, Jamaica -- Casey Camp Horinek, Ponca Tribal Councilwoman, spoke of the genocidal fracking, and the oil and gas industry poisoning her people, and poisoning the land, air and water.
Speaking at the hearing of the Inter-American Commission on Human Rights in Jamaica,  Casey described how she and other Water Protectors were brutalized in Standing Rock.
Casey spoke of her Grandfather who walked the Trail of Tears. He walked 670 miles at the age of eight. One out of three of her people died on this walk.
Ponca land had been stolen by the federal government, under the Treaty of 1868. Casey's people, Ponca, were from the area of the Missouri River and were forcibly removed to Oklahoma.
"We now live in an area entirely impacted by the extractive industries," she said of Ponca lands in Oklahoma.
Casey, an elected Ponca Councilwoman, is Hereditary Drum Keeper of the Women's Society.
In her greeting, Casey gave thanks to the Arawaks, ancestors of Jamaicans.
Describing the impacts of fracking, Casey said there have been 10,000 earthquakes in the last five year, man-made earthquakes, because of the extractive industries. The Phillips 66 Refinery is one of them. And the water is being poisoned.
"All of the four-legged, fins, the wings, those who live under the ground are affected. You can't grow organic foods for an eight mile radius."
"We live under a policy of environmental genocide, with the policies of the United States government continuing to de-regulate and allow more pollution to happen, including carbon trading, which is poisoning the air even more."
"Every single family has many family members with cancer and an immune deficiency disorder. "Many children are not making it to birth."
"Commodifying all things that are sacred is a crime," she told the Commission.
The Ponca Nation has established the statute of the Rights of Nature, which will give it standing in the courts.
"We will be taking people into Ponca Court."
When she heard of Standing Rock, she went for prayer. She went to protect the water of the Missouri River and the graves of her ancestors downstream.
She went to Standing Rock to meet with historical preservation officers.
On the day of Oct. 27, 2016, Water Protectors were protecting the Treaty Camp.
"Standing Rock were our allies."
The pipeline, Dakota Access Pipeline, had not been allowed to pass through a white area north of Standing Rock.
Casey described how Water Protectors were brutalized in Standing Rock.
"There were helicopters, planes, drones, armed personnel, with El Rads, sound canons, percussion grenades, pepper spray, hundreds of riot-geared personnel who descended on us and began to brutalize us."
"They knocked us to the ground, as we stood in prayer, hundreds of unarmed women, men and children."
"They zip-tied us. They put us on the ground and hauled us in buses to the basement of the Morton County Jail and imprisoned us in dog cages, after they wrote numbers on our arms like the Jews going to gas chambers."
"We were kept in dog cages on the bare cement floor."
"That was my number. Number 138," she said, showing the number written with marker on her arm.
In all, 142 were arrested that day.
. 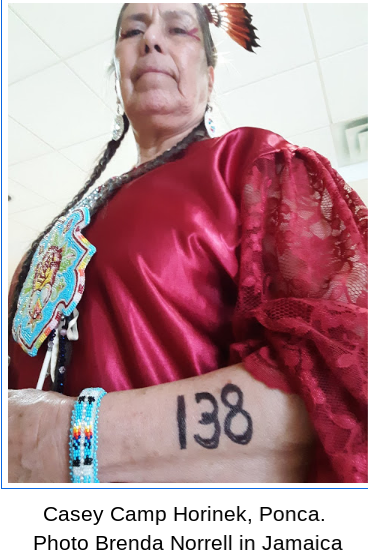 Ofelia Rivas, Tohono O'odham, told the Commission how O'odham are abused by U.S. Homeland Security, and its U.S. Border Patrol, on their sovereign land at the US Mexico border.
The day after her testimony in Jamaica, Ofelia was slapped with an SSSS status on her boarding passes and delayed two days with constant searches and prolonged boarding delays, missing flights, in transit:
https://bsnorrell.blogspot.com/2019/05/us-homeland-security-aims-to-annihilate.html 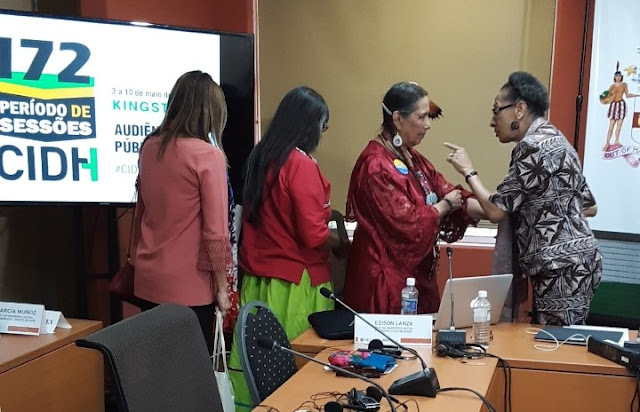 Article and photos copyright Brenda Norrell, Censored News
at May 15, 2019

I am so sorry this happened to this sacred woman and all the sacred people who stood in prayer for the water, land, and people during that terrible public display of inhumane treatment. Some of the torture was recorded by brave independent individuals and I could only imagine how horrible our individual Native people and allies were abused. I ask our Great Creator to intervene and stop the brutality, now.

Thank you, Brenda, for making the trip to personally cover the testimonies of our defenders. I know it isn't easy to travel with a meager budget and when you are not completely well. May the Great Creator bless you and keep you and everyone safe always.


so proud of all the brave water protectors. Makes no sense to attack

people for praying and protecting the water we all need.