The United States focused blame on TigerSwan and private security companies, instead of police and Sheriffs Departments, for excessive force at Standing Rock

KINGStON, Jamaica -- A delegation from the United States government focused blame on private security companies for the excessive force at Standing Rock, and not on the massive police forces that attacked Water Protectors, during the Inter-American Commission on Human Rights hearing in Jamaica.


Showing disrespect to the Commission, the U.S. delegation, from the U.S. State Department and U.S. Embassy, said that the U.S. questions the competency of the Commission and does not have to abide by the Commission.
Referring to the private mercenaries TigerSwan, the U.S. pointed out legal action is ongoing against TigerSwan, which operated without a license in North Dakota. The case is on appeal this week in North Dakota.
Further, the U.S. said private security companies were responsible for the attack with dogs on Water Protectors.
The United States officials failed to explain or describe the massive buildup of Sheriff's Departments and police from through out the United States responsible for the attacks on Water Protectors with tear gas, water cannons, sound cannons, and projectiles that resulted in serious injury to Water Protectors at Standing Rock.
The U.S. took no responsibility for the presence of the mass of police, or the injuries that resulted.
Instead, in the typical style of the U.S. bureaucracy, U.S. officials claimed the U.S. had investigated itself, formed a task force, and issued a report.
The United States delegation did not refer to the role of President Obama, who allowed the police abuse to continue, or the role of President Trump, who advocated for the pipeline and showed no respect for Native people.
Although the United States delegation said it is engaged in consultation with tribes, Casey Camp Horinek, Ponca, responded that "Consultation does not work." She described how elected tribal leaders are co-opted by energy companies.
Horinek described the injuries and abuse of peaceful Water Protectors by police, Morton County Sheriff deputies and jailers. Horinek showed the Commission the number written on her arm at Morton County jail, as was done to the Jews on their way to the gas chambers.
Horinek told how she was caged in a dog cage on a concrete floor with other Water Protectors, including diabetic children who were denied medicine and went into seizures.
Alexis Ludwig, Deputy Representative,  Mission to the Organization of American  States, claimed the U.S. values the work of the Commission, and supports it. However, Ludwig questioned the competency of the Commission.
"We value the Commission even if we sometimes don't acknowledge the competency of the Commission to look into certain matters that involve pending judicial action in the United States," Ludwig told the Commission.
Ludwig thanked the Indigenous women who testified for their advocacy. "We may not always agree, but we do value your work."
Ludwig then said that the hearing is not a petition based hearing on a specific case.
"These issues are very complicated," he said. Pointing out the sovereignty of tribes, he said the U.S. has flexibility in these matters.
Ludwig said a federal order mandates regular meaningful consultation with tribes.
Ludwig said that the US continues to push for meaningful implementation of the Declaration on the Rights of Indigenous Peoples.
Referring to the Indigenous women's delegation, he said, "our friends who have just spoken."
Ludwig said the Commission's work is not legally binding on the U.S., and the Commission does not have the right to apply the Declaration on the Rights of Indigenous Peoples.
Thomas Weatherall, attorney adviser for the U.S. State Department, said private security should act in a lawful manner.
"The United States takes seriously reports that excessive force may have been used," Weatherall told the Commission.
Weatherall said that the private security firm using dogs on Water Protectors was hired by the company constructing the pipeline, Dakota Access Pipeline.
Weatherall said Morton County organized a task force to investigate the attack with dogs.
Referring to the private mercenaries hired by the pipeline, TigerSwan, he said it was operating without license.
The case against TigerSwan is on appeal in North Dakota, with oral arguments beginning this week, he said.
As a result of the task force, which included Sheriff's Departments and the BIA, he said the Department of Justice worked to promote dialogue and established a phone number for complaints.
U.S. officials described voluntary measures created to ensure extractive energy companies do not hire private security comapnies that result in excessive force and violence.
Bion Bliss, who works at the U.S. Embassy in KIngston, Jamaica, was the third member of the U.S. delegation responding to the testimony of the Indigenous Women's Delegation, testifying on the criminalization of Indigenous Peoples.
Responding to questions after the testimony, Leoyla Cowboy, Dine; wife of Water Protector Michael Little Feather Giron, Chumash, said her husband has been through 14 lockdowns  in federal prison. During those times, the family did not know if he was alive or dead.
The Indigenous Women's Delegation members are Michelle Cook, Dine' lawyer and organizer; Casey Camp Horinek, Ponca Tribal Councilwoman; Ofelia Rivas, Tohono O'odham testifying on abuse by U.S. Border Patrol and militarization of the border; and Leoyla Cowboy, Dine' Water Protector; wife of imprisoned Water Protector Michael Little Feather Giron.
After the testimony, Commissioners asked how could this happen in the U.S. and why the U.S. has not abided by its own laws.
Read more:
Live from Jamaica -- Native Women Testify:
https://bsnorrell.blogspot.com/2019/05/live-from-jamaica-inter-american.html

Tohono O'odham Ofelia Rivas delayed two days by airline, with repeated searches, after U.S. slaps SSSS status on her boarding passes following testimony in Jamaica. Ofelia testified about the militarization of the border, and abuse by the U.S. Border Patrol
https://bsnorrell.blogspot.com/2019/05/militarization-at-standing-rock-and.html 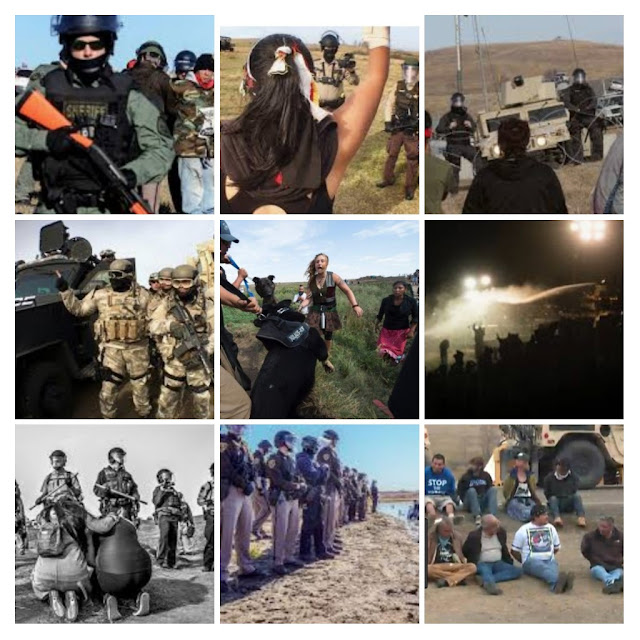 they no what they did we all would love clean water not oil water knowing the force you guys did the morton tiger swan all the blame not us. hmmm wounder what they tell there flamiles when they all went home