On Saturday, traditional Cayuga were attacked and violently beaten by police thugs -- a white goon squad similar to the ones on Pine Ridge in the 1970s before Wounded Knee. Cayuga were beaten by this newly appointed police squad, in Seneca Falls, upper New York state. This follows the demolition of the longhouse, schoolhouse and other buildings last week. It is all shown in photos and videos. 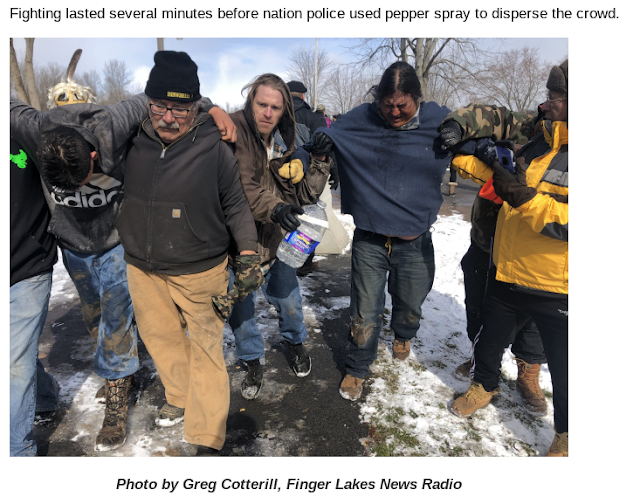 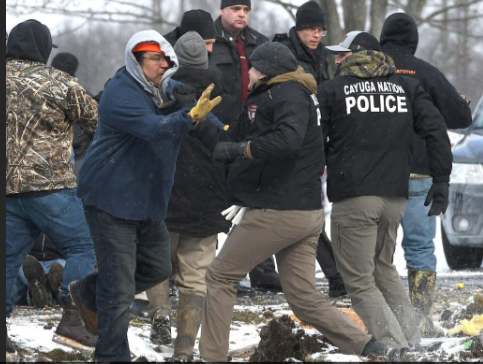 
While the Mohawks of Canada are blocking trains to establish that this is our land, Clinton Halftown is looking at the US and New York State to recognize him as the chief of the Cayugas. This is a community that is under the great peace kaianerekowa. He has brought in white goons to attack, beat up, tear gas and arrest his own men and women and children.
Last week he bulldozed the daycare, school, clinic, longhouse, homes, shops. It s located on Cayuga Lake near Seneca Lake in New York State. The Cayuga are not Americans. They wish to remain who they are, Cayuga.
These people don't want the Bureau of Indian Affairs in their community or their lands turned into business trusts for Halftown on their territory. The money Halftown took was earned by the people in their cigarette and gas shops. This is a dictatorship. Do something. There is no excuse for anybody not to help them.
.

SENECA FALLS — For close to an hour Saturday morning, a rally and press conference held by the Cayuga Nation Council of Chiefs was a peaceful affair.

It didn’t end that way.

Shortly after the press conference wrapped up, a group of people clashed with Cayuga Nation police near Route 89 and Garden Street Extension, resulting in at least several people being pepper sprayed by Nation police.

One person, who possibly suffered a heart attack, was taken by ambulance to an area hospital. Others were transported by Nation police to their jail in Cayuga County.

It was a violent day in Seneca Falls, as a leadership dispute that resulted in several buildings being demolished last weekend on Cayuga Nation property escalated further.

A press conference was held by seven chiefs on Saturday, and a short time after the press conference ended a crowd gathered at the site crossing yellow caution tape that lined the property.

That’s when several physical altercations ensued. Those in the crowd clashed with members of the Cayuga Nation Police Department.

Article in The Citizen:
SENECA FALLS — The Cayuga Nation Police Department arrested members of three other Native American nations in response to violence that broke out minutes after a press conference held by Cayuga Nation chiefs Saturday morning.
The press conference took place on a road off Route 89 in Seneca Falls adjacent to the property that was previously controlled by a Cayuga Nation group that doesn't recognize Clint Halftown, the nation's federal representative, as the nation's leader. Halftown's Cayuga Nation Council ordered its newly created police department to raid the site on Feb. 22 and take back the properties. It also demolished several structures, including a gas station/convenience store, schoolhouse, daycare center and sugar shack.


Cayuga Nation citizens today protested the destruction of over a dozen of their businesses and residences, including an ice cream stand, daycare, cultural center and school house. The buildings were damaged beyond repair at 2 AM Saturday morning by Clint Halftown’s hired “Cayuga Nation Police,” none of whom are Cayuga.

These properties were the heart of a growing community of Cayuga Nation citizens coming home to their territory. It is the latest and most heinous power grab to date by Halftown against the followers of the traditional Cayuga Nation chiefs and clan mothers, who have governed their people as part of the Haudenosaunee Confederacy for over a thousand years. Sachem Sam George, one of the traditional chiefs who lives on the territory, issued this statement in response:

“In order to call yourself a Cayuga Nation Council you must have condoled chiefs, a ceremony by which the Haudenosaunee Confederacy recognizes those condoled chiefs, their clan mothers and faith keepers. Clint Halftown has been recognized by the Bureau of Indian Affairs (BIA) as a federal representative whose only function is to accept federal monies. We have no idea what he does with this money, meant for the Cayuga people.

The properties that were destroyed by Mr. Halftown were used by the Cayuga people, for their livelihood, for learning our culture, our history and our language, to provide daycare for our children, to have our traditional garden with all of the people, especially our children, learning about our seeds and growing traditions. This area was our hub for Cayuga people.

Ask Mr. Halftown how this action is for his people that he accepts money on behalf of. The Cayuga people here have thrived off of the properties he destroyed. No leader of the Cayuga people would bring in guns, we are a peaceful people. Today, while reeling from the action, my people have shared their fears with me, including little children.

How can the BIA justify Halftown’s actions against his own people? The decision spoken of in recent articles affirmed that the Great Law of Peace, the traditional, oral law of the nations of the Haudenosaunee Confederacy is based on consensus decision making and clan mothers, and still governs the Cayuga Nation and its leadership decisions. Halftown’s hiring of former police officers parading as the Cayuga Police was done with NO consensus decision.

This is much more than ‘Those properties were under the control of the group that opposes Halftown’. It has been about the people who have come home to their territory living and thriving in their own community, on their traditional land.

The Cayuga people who used these properties never asked Halftown or the Federal government for a penny, as sovereign people we govern through the Great Law of Peace, we don’t take another governments money. If you know the Two Row Wampum Treaty, we believe that we stay in our canoe and the surrounding people stay in their own boat. It saddens and distresses us that all of the news articles refers to him as ‘the leadership’. The actual Council and the Haudenosaunee Confederacy for many years have tried to work with him but someone who is full of ego will not budge to work with his people.

One silver lining here is that many groups of people have contacted us offering help, both Native and non Native- our allies. The other is our ways that have been going on for thousands of years. Our law is a law of the mind- from giving thanks through condolence, to coming to one mind in council, to the realization that the Good Mind pursues and accepts Peace. The law is created and maintained by the Good Mind, one that is both ‘used well’ and ‘used for good’ since one will inevitably lead to the other.”

It is the sincere hope of all those affected that these wanton acts of destruction will cause the Bureau of Indian Affairs to finally see that Halftown does not have the interests of his own people at heart. It is only the recognition of the BIA that has given him the power to perpetuate these abuses.

Stand strong together free people! The little victories by Halftown will be swallowed whole by your efforts. As a North Georgia Band Cherokee I stand in solidarity with your struggles. From across the wide land that is called American here in Oregon I send up my prayers, burn sage as I plead with the Great Father to guide you all to ultimate victory against this villainous person.