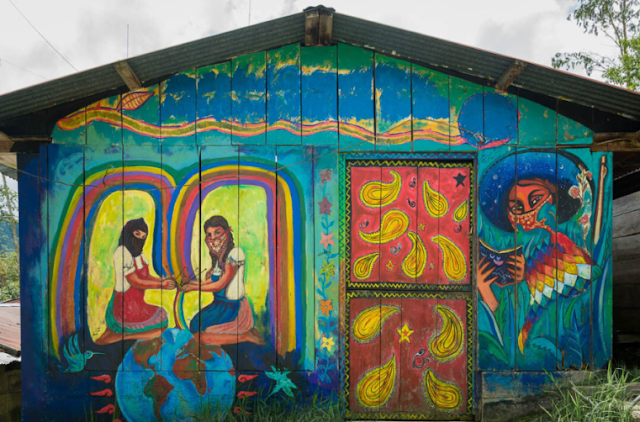 To the people of Mexico:
To the peoples of the world:
To the National Indigenous Congress—Indigenous Governing Council:
To the Sixth in Mexico and abroad:
To the Networks of Resistance and Rebellion:

We write to inform you that:

Given the serious and scientifically proven risk to human life presented by COVID-19 or “Coronavirus”;

Given the frivolous irresponsibility and lack of seriousness shown by the bad governments and the political class in its entirety who are using this serious humanitarian problem to attack each other instead of taking the necessary measures to confront a life-threatening virus which endangers all regardless of nationality, gender, race, language, religion, political affiliation, social class, or history;

Given the lack of accurate and timely information about the spread and severity of the virus and the lack of a coherent plan to confront it, and;

Given that our commitment as Zapatistas is to struggle for life;

We have decided the following:

First: We declare a red alert in all of our communities, towns, barrios, and Zapatista organizational bodies.

Second: To the Juntas de Buen Gobierno [Good Government Councils] and the Zapatista Autonomous Municipalities in Rebellion, we recommend the full and immediate closure of the Caracoles and Centers of Resistance and Rebellion.

Third: To the bases of support and the entire Zapatista organizational structure, we recommend adherence to the series of recommendations and special hygiene measures which will be distributed in all Zapatista communities, towns, and barrios.

Fourth: Given the total absence of the bad governments, we strongly urge everyone [todos, todas, todoas] in Mexico and around the world to follow the necessary scientifically-based sanitary measures that will allow us to survive this pandemic.

Sixth: We call on all not to lose human contact, but rather to temporarily change our forms of relating as compañeras, compañeros, compañeroas, sisters, brothers, and hermanoas.

The word, the listening ear, and the heart have many ways—paths, calendars, and geographies—in and on which to meet. This struggle for life can be one of them.

From the mountains of Southeastern Mexico,
For the Indigenous Revolutionary Clandestine Committee—General Command of the Zapatista Army for National Liberation,