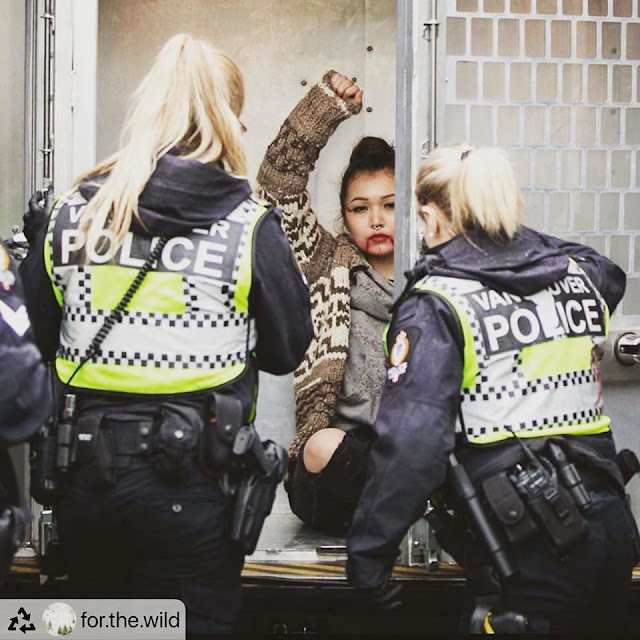 
In support of Wet'suwet'en who are battling to defend their homeland from Coastal GasLink pipeline, five youths were arrested at the B.C. Legislature on March 4, 2020. The following videos Indigenous youths making their stand and reveal a police officer running into one of the youths.

“Our lives are more valuable than an economic bottom line which is why we are occupying this office currently,” said Indigenous youth leader Ta’kaiya Blaney on a live stream she posted to social media Wednesday night.

“We had a good conversation, but we know these meetings cannot set the tone for a history, and ongoing history, of colonization in this country," she said after youths met with Indigenous Relations Minister Scott Fraser.

First Video ~1~ of Wetsuweten Youths Land Defending in the Legislator AFTER a meeting with B.C, Indigenous Relations Minister Scott Fraser who told the Indigenous Youths that he didn't Respect First Nations rights, laws and wouldn't stand with them. Simply Fraser who once worked on the Alberta Oil Rigs, was indifferent to the Native plight. Fraser could care less then said he felt betrayed. Imagine a Member of Legislative Assembly that is suppose to be responsible whining. The Victoria Police also had confiscated the youths' phones, cameras and shut the curtains to shut out the outside while they arrested the youths according to legal observers. Indigenous Youth that were arrested are: Saul Brown, Ace Harry, Shay Lynn Sampson, Navidu Willie, Kolin Sutherland Wilson.  Their rights were not read to them and the Victoria Police kept legal observers from assisting the youths according to eye witnesses.