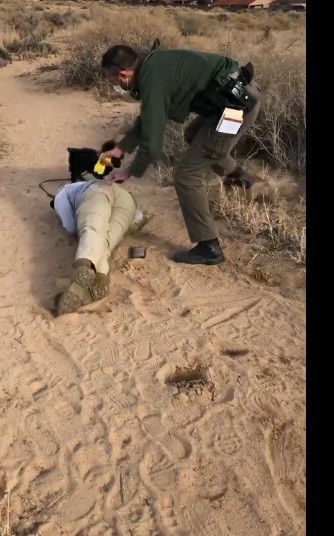 Darrell House, Navajo Oneida, was walking through the Petroglyphs at the Piedra Mercado trail when he was repeatedly tasered by park rangers. 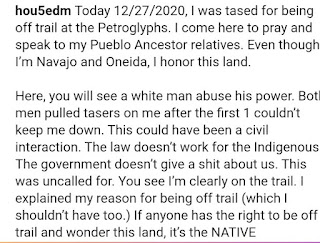 The violent tasering by park rangers was quickly viewed 10,000 times and reported in Albuquerque media.
"A Native American Marine veteran walking his dog at Petroglyph National Monument Sunday was Tasered by a National Park Service ranger after he ventured off the marked hiking trail to find a quiet place to pray at the Native American sacred site. The incident was captured on video by a companion. That video was later shared to Instagram and with The Paper," Albuquerque's weekly The Paper reports.

Darrell House was given three citations by the federal park ranger for interfering with agency function, false information, and being off-trail, KRQE News reports.
Instagram https://www.instagram.com/hou5edm/
.

It was hard for me to watch, even harder not to feel a boiling anger against Graden and Wineland. I shared this link on my FB page. It's the least I could do.

I pray for justice for all under our Grandmother earth and the Great Spirit. I pray for a restored earth under love and compassion.

Hire legal counsel. Do not let them get away with this.

I'm White and have always been an Ardent Admirer of the Native Americans and what they stand for...their Beliefs,Practices, Teachings...This latest Raciest attack by "Law Enforcement Officers" is a bad Indictment on the Force and needs to be seriously Questioned as to why it is overlooked the majority of times by the Authorities...no White Person would have been subjected to that inhumane treatment and instant suspension for these Officers without Pay pending a thorough Investigation is the least I would expect from the Authorities...Meanwhile now is the time to seek Legal advice...