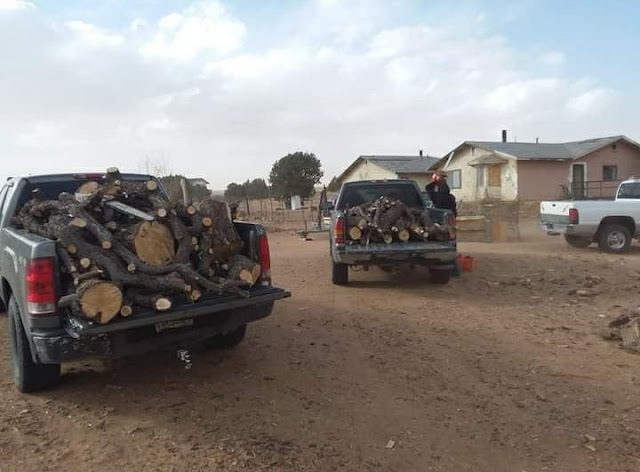 Photo: Dine' volunteers Mercury Bitsuie and Uncle Andy Dann raise their own funds and deliver firewood to Dine' in desperate need at isolated homes.
Breaking news: The Navajo Nation asked for major disaster declaration today due to uncontrolled virus spread:
https://www.azcentral.com/story/news/local/arizona-health/2020/11/30/arizona-coronavirus-live-news-updates-covid-19-pandemic/6463069002/
CARES Act funds -- The Navajo Nation Council says $300 million in unspent federal virus relief funds must go to hardship relief, direct payments to Dine'. With time running out to spend the $714 million in CARES Act funds, the Navajo government is in chaos. At the same time, there were 310 new cases of coronavirus on the Navajo Nation. Now, 658 Navajos have died from the virus. -- Censored News

Council affirms November 20 for automatic reallocation of unobligated CARES Funds for Hardship Assistance Program
By Navajo Nation Council
December 3, 2020
WINDOW ROCK, Ariz. — In response to a memorandum issued by the Navajo Nation Office of the President and Vice President on Nov. 20, Speaker Seth Damon provided further guidance on the reversion of CARES Act monies intended to be deposited into the Hardship Assistance Program established by the Navajo Nation Council.

"November 20th was the absolute hard deadline for any outstanding contracts to be encumbered or obligated in the Navajo Nation's financial accounting system. The Nez-Lizer Administration had months and weeks to prepare program contracts before that deadline. The Council stands by the November 20th deadline, and we ask the Navajo public to join us in holding President Nez to that final date for obligating monies. Anything not in the system on that date belongs in the Hardship Assistance Program," said Speaker Seth Damon.

The Navajo Nation Council extensively discussed the allocation of more than $714 million in federal CARES Funds and approved earlier allocations to water, power, broadband and coronavirus (Covid-19) response projects. Early proposals presented to the Council by Speaker Damon, which circulated among the media and was reported on in news outlets, a "Plan J" expenditure scenario was included with Covid-19 Relief Payments and a Survivor's Benefit. In July, Council created the Hardship Assistance Program and followed that in September with additional funding of nearly $50 million.

"Navajo Nation programs and the Navajo People are in turmoil over the memorandum issued by the President's Office regarding the reallocation of CARES Act funds," said Speaker Damon. "We're here to state that Navajo law currently mandates that all funds not encumbered by November 20 will revert to the Hardship Assistance Fund. The point of this deadline was to eliminate any room for confusion or uncertainty about how unspent and unobligated funds would be dealt with. The law is plain and clear, and the Council is greatly concerned the President is spreading disinformation to the Navajo People."

Contrary to Navajo law, as set forth in Resolution No. NABIO-49-20, the memorandum set a new deadline of December 4 for Executive Branch programs allocated CARES Funds by the Council. The Navajo Nation Controller did not endorse that memorandum, despite the President's Office claiming the directive to Executive Branch programs was supported by the nation's financial experts.

"Our role at OOC is to ensure compliance with both Federal and Navajo Nation laws and regulations to keep the Nation in compliance. In keeping with that, we felt NABIO-49-20 was clear. The deadline to encumber or obligate expenditures was November 20, not December 4. Therefore, we did not sign the memorandum," stated Controller of the Navajo Nation Pearline Kirk.

The Navajo Nation Council's authority for reallocating funds was approved through Council vote and was enacted into law by President Nez through Resolution Nos. CJY-67-20 and CS-73-20. NABIO-49-20 established the first reallocation and set a November 20 deadline for unobligated funds to be reverted, and a December 15 deadline was set for any obligated funds for which no goods or services have been delivered to the Navajo Nation. The federal CARES Act sets a deadline of December 30 for all Coronavirus Relief Fund dollars to be expended.

Under current Navajo law, nearly $41 million in previously-allocated water projects monies were reallocated by the Council to the Hardship Assistance Program. The law created the automatic reversion as a catch-all for any unspent CARES Act funds given to the Executive Branch and the President to expend in response to Covid-19 to avoid reversions to the US Treasury.

"The President has had months to ensure Navajo Nation programs receiving CARES Act funds were making adequate progress in contracting and encumbering. As of December 2, nearly $300 million of the $714 million was unspent, and the Council's position is that every single penny of unobligated dollars on November 20 is now part of the Hardship Assistance Program funds."