'Never forget' Solidarity with Riders and in Remembrance of History

In 1862, President Abraham Lincoln ordered the execution, by hanging, of 38 Dakota Sioux prisoners in Mankato, Minnesota. Most of those executed were holy men or political leaders of their camps. None of them were responsible for committing the crimes they were accused of. Coined as the Largest Mass Execution in U.S. History. (Brown, Dee. BURY MY HEART AT WOUNDED KNEE. New York: Holt, Rinehart, Winston, 1970. pp. 59-61) 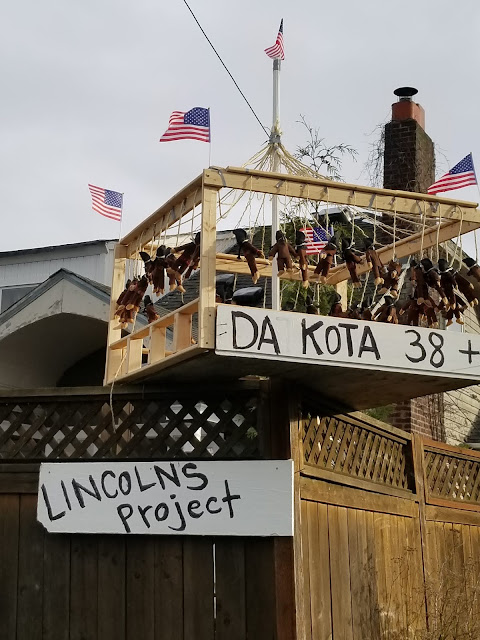 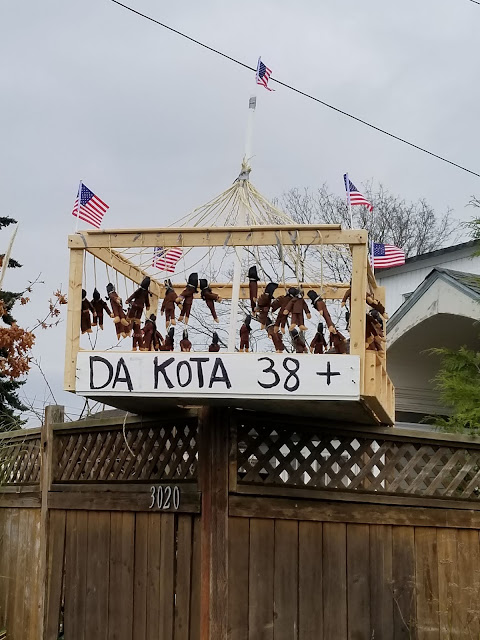 'Never forget' Solidarity with Riders and in Remembrance of History
By Brenda Norrell
Censored News
SEATTLE -- The Dakota 38 are remembered today in a tribute above the home of Robert Free in Seattle, so that history will not be forgotten and the reality of Lincoln as president will be known.
"The reason we're doing it is we have to keep these things alive and in memory," said Robert Free.
Robert, whose tipi was at Alcatraz, was at the Occupation of Wounded Knee, in the fishing rights struggle in the northwest, on the Trail of Broken Treaties and at the BIA takeover in Washington. Today, struggling with cancer and disabled, Robert spoke with descendants of the Dakota 38 before volunteers put up the remembrance.
Speaking of the hanging of the Dakota 38, Robert said, "They like to suddenly forget what they have done."
The reality was that the people were starving and had to fight to get food.
"The United States started a war on them."
"It's time to reset everything, to right some wrongs, we might be doing that -- reconciling  and moving forward."
"This is the reality of Lincoln as president: Lincoln directed the mass murder and the executions by hanging of the Dakota who were desperate from starvation in the prisoner of war camps. The current, 'The Lincoln Project,' by republicans leaves out this mass murder deed of president Lincoln," Robert said.
"This is the reality of Lincoln as president, so this solidarity is to bring out this reality of the real Lincoln."
"Every president dispossessed Indians from their lands," Robert said, adding that Nixon did stop termination and endorsed the bill for the return of Blue Lake at Taos Pueblo and other self-determination acts.
"The underground warriors of Alcatraz went to help other Indian communities who were fighting alone and disenfranchised from their communities," Robert said.
"The underground warriors of Alcatraz were on the frontlines and kept their mouths shut and put their bodies on their line," Robert said in an interview with Censored News today.
Thirty riders arrived on horseback in Mankato for the remembrance on Saturday. The ride began in Nebraska. Read the article:  https://www.mankatofreepress.com/news/local_news/thirty-riders-make-long-trek-to-mankato-for-dakota-exile-ceremony/article_7e5dbbf4-457d-11eb-967e-2372b11e1d0c.html 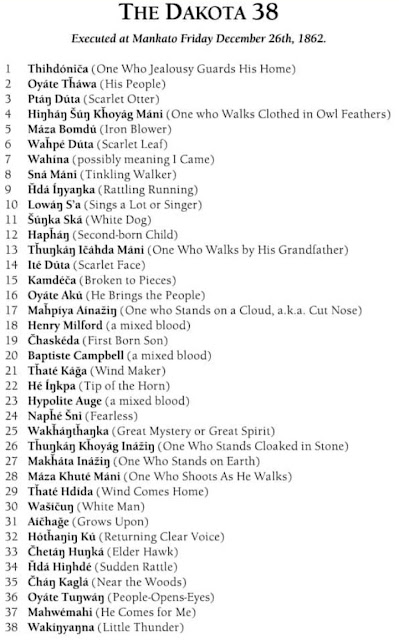 Letter from Hdainyanka to Chief Wabasha written shortly before his execution:
https://www.usdakotawar.org/history/aftermath/trials-hanging

"You have deceived me. You told me that if we followed the advice of General Sibley, and gave ourselves up to the whites, all would be well; no innocent man would be injured. I have not killed, wounded or injured a white man, or any white persons. I have not participated in the plunder of their property; and yet to-day I am set apart for execution, and must die in a few days, while men who are guilty will remain in prison. My wife is your daughter, my children are your grandchildren.  I leave them all in your care and under your protection. Do not let them suffer; and when my children are grown up, let them know that their father died because he followed the advice of his chief, and without having the blood of a white man to answer for to the Great Spirit."

Historical accounts:
"The trials of the Dakota were conducted unfairly in a variety of ways. The evidence was sparse, the tribunal was biased, the defendants were unrepresented in unfamiliar proceedings conducted in a foreign language, and authority for convening the tribunal was lacking. More fundamentally, neither the Military Commission nor the reviewing authorities recognized that they were dealing with the aftermath of a war fought with a sovereign nation and that the men who surrendered were entitled to treatment in accordance with that status."

On September 28, 1862, two days after the surrender at Camp Release, a commission of military officers established by Henry Sibley began trying Dakota men accused of participating in the war. Several weeks later the trials were moved to the Lower Agency, where they were held in one of the only buildings left standing, trader François LaBathe’s summer kitchen.
As weeks passed, cases were handled with increasing speed. On November 5, the commission completed its work. 392 prisoners were tried, 303 were sentenced to death, and 16 were given prison terms.

President Lincoln and government lawyers then reviewed the trial transcripts of all 303 men. As Lincoln would later explain to the U.S. Senate:

"Anxious to not act with so much clemency as to encourage another outbreak on one hand, nor with so much severity as to be real cruelty on the other, I ordered a careful examination of the records of the trials to be made, in view of first ordering the execution of such as had been proved guilty of violating females."

When only two men were found guilty of rape, Lincoln expanded the criteria to include those who had participated in “massacres” of civilians rather than just “battles.” He then made his final decision, and forwarded a list of 39 names to Sibley.

At 10:00 am on December 26, 38 Dakota prisoners were led to a scaffold specially constructed for their execution. One had been given a reprieve at the last minute. An estimated 4,000 spectators crammed the streets of Mankato and surrounding land. Col. Stephen Miller, charged with keeping the peace in the days leading up to the hangings, had declared martial law and had banned the sale and consumption of alcohol within a ten-mile radius of the town.

As the men took their assigned places on the scaffold, they sang a Dakota song as white muslin coverings were pulled over their faces. Drumbeats signaled the start of the execution. The men grasped each others’ hands. With a single blow from an ax, the rope that held the platform was cut. Capt. William Duley, who had lost several members of his family in the attack on the Lake Shetek settlement, cut the rope.

After dangling from the scaffold for a half-hour, the men’s bodies were cut down and hauled to a shallow mass grave on a sandbar between Mankato’s main street and the Minnesota River. Before morning, most of the bodies had been dug up and taken by physicians for use as medical cadavers.

Following the mass execution on December 26, it was discovered that two men had been mistakenly hanged. Wicaƞḣpi Wastedaƞpi (We-chank-wash-ta-don-pee), who went by the common name of Caske (meaning the first-born son), reportedly stepped forward when the name “Caske” was called, and was then separated for execution from the other prisoners. The other, Wasicuƞ, was a young white man who had been adopted by the Dakota at an early age. Wasicuƞ had been acquitted.