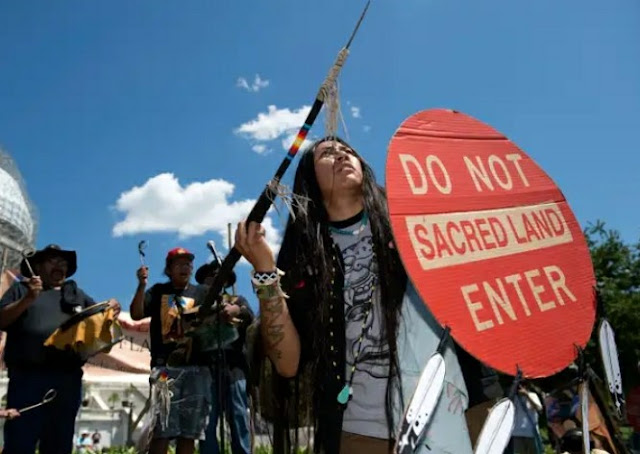 OAK FLAT, Ariz. – The Biden Administration's Department of Justice ("DOJ") filed papers in the U.S. 9th Circuit Court of Appeals this evening trying to stop the traditional Apache from protecting their religious and treaty rights at Oak Flat in eastern Arizona.

On March 18, 2021, Apache Stronghold appealed to the 9th Circuit to stop the destruction of Oak Flat or Chi'chil Bildagoteel by foreign mining companies which violates both the Religious Freedom Restoration Act and the 1852 Treaty between the Apache and the U.S. government.

In tonight's response to Apache Stronghold's March 18, 2021, appeal, DOJ says,  "The Act [Sen. John McCain's midnight rider giving away Oak Flat to foreign mining companies] does not impose a "substantial burden" on Plaintiffs [Apache Stronghold] …[b]ecause the plaintiffs were not coerced by the Government's action into violating their religious beliefs."

"We disagree that destruction of our sacred land and stopping our ability to practice our religion are not a 'substantial burden,'" said Apache Stronghold leader and former San Carlos Apache Tribal Chairman Dr. Wendsler Nosie, Sr.  "And we disagree that giving away Chi'chil Bildagoteel to a private company, thus subjecting us to criminal trespass arrest for praying on our sacred grounds is not coercion."

DOJ claims that "Congress extinguished that obligation when it passed the Act," referring to the Treaty of 1852 between the Apache leaders and the U.S. Government which guarantees the Apache "prosperity and happiness."

"Our Treaty of 1852, which was signed before there were official "Tribes," was not "extinguished" by Sen. John McCain's last minute, sneak defense appropriations rider," added Dr. Nosie.  "Sen. McCain resorted to the rider, because, in his own words, he said the Apache were "preventing" business by defending our religion.  A Treaty is a promise that we expect to be kept."

Earlier on February 12, 2021, in spite of refusing to stop the proposed land giveaway, U.S. District Court Stephen Logan ruled that "[t]he evidence before this Court shows that the Apache peoples have been using Oak Flat as a sacred religious ceremonial ground for centuries…the spiritual importance of Oak Flat cannot be overstated…the Apache peoples believe that Usen, the Creator, has given life to the plants, to the animals, to the land, to the air, to the water…The Apaches view Oak Flat as a 'direct corridor' to the Creator's spirit."  And, "[t]he Court does not dispute, nor can it, that the Government's mining plans on Oak Flat will have a devastating effect on the Apache people's religious practices" and "will completely devastate the Western Apaches' spiritual lifeblood."

Apache Stronghold will reply to the Biden Administration's filing on June 7.

Please note that the Apache Stronghold's Lis Pendens, or lien, on the Oak Flat property title filed in the Pinal County Courthouse in Florence is still in effect.