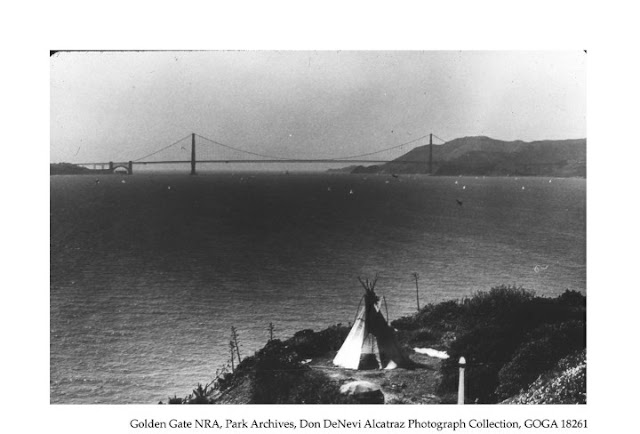 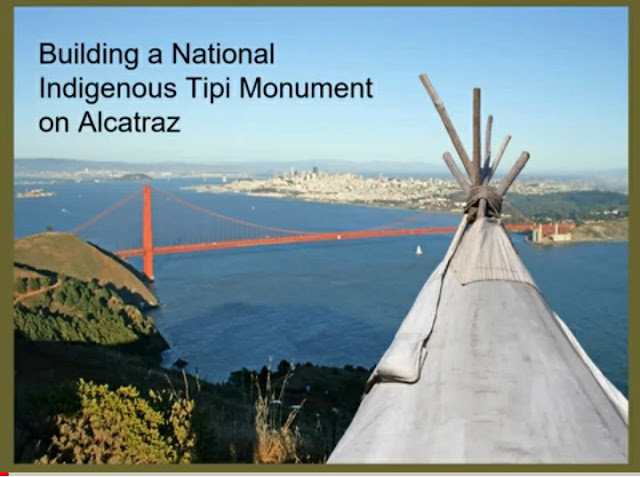 By Brenda Norrell
Censored News
The tipi that stood during the Occupation of Alcatraz is now envisioned as a monument of the resistance that resulted in upholding far-reaching rights for Native People.
Robert Free remembers setting up the tipi in the early part of the occupation in 1969, and now has a vision of it as a monument of the resilience, tenacity and self-determination.

Remembering those who helped set up the tipi, Robert said, "Dennis Hastings, now a doctor, the Bratt brothers Peter and Benjamin, Joe Bill, Angie Martinez, and many others, added their strength and knowledge."
"The tipi was put up early during the Occupation of Alcatraz Island. It remained there until the U.S. government Marshalls and the FBI removed everyone 19 months later."
"It was a place most all visitors came to rest and enjoy. It had a sweat lodge, used as needed."
Remembering those times that are now a part of history, he said, "It was the only  place on the island where prisoners were allowed to grow flowers and gardens, next to a cliff with seals at the bottom."
The US Marshalls took down the tipi and took it off the island during the removal of the occupation. "I passed on  the  tipi  to Wovoka, Trudell's newborn baby."

Now, Free foresees the tipi as a grand monument to the Occupation of Alcatraz and the resilience, tenacity and self determination -- spirit manifested and modeled for all Indigenous Peoples.
"It could be a huge bronze, or some metal tipi. It will go out as an open call for artist proposals."
"It could be a giant spiral of glass, or an art piece the size of the Statue of Liberty on the east coast. We will see what comes to the table!"
Robert hopes many will join him and  make the dream a reality. The new San Francisco Native American Historical District has shown interest and support.
"We envision utilizing the resources through coalition," he said.
The site is the exact location of the tipi of the 1969 occupation on Alcatraz Island.
Stonewalling by the National Park Service
"We found the National Park Service conducted a $300,000 survey in 2009 of the  historic and cultural significance sites on Alcatraz Island."

There was little about the Occupation.

"Then they never got back to us again," Robert said.
The group working on making the tipi monument a reality then again went through many hoops of the National Park Service to just temporarily raise the tipi for an honoring of frontline warriors for the 50th anniversary in 2019.
Now, again, the group is requesting the National Park Service to follow up on the 2009 meetings where the proposal was submitted.

"The Park service sent me an e-mail saying, 'After talking with my colleagues I have this to tell you:  A more permanent recognition of the Occupation is important and aligned with our 2026 Alcatraz Vision, but we are not currently in a position to provide a lot of energy on it ... 2022 would be a better time to convene and start serious discussion of possibilities."

The group received the email dated March 18, 2021, at 9:28 am, from the National Park Service saying that in dialogue with colleagues, nothing could be done and no one could help until the  summer of 2022.
The National Park Service staff has had committee meetings discussing other proposals for the island, but has refused to give the group the names of the committee members and their roles and titles. The Park Service refused to give them a chronology and minutes of the meetings.

"I see the Park Service pitting Indians against Indians in their lack of responses."

The group wants a more transparent environment. It is taking the matter to the greater public and more directly to decision-makers at the head in the Department of Interior.
"We are seeking support from allies and vested interested parties that can envision the potential," said Robert, who successfully battled cancer for a decade and is now battling cancer again. Robert

passed on the torch for the effort at the 50th Anniversary of Alcatraz to the next generation. 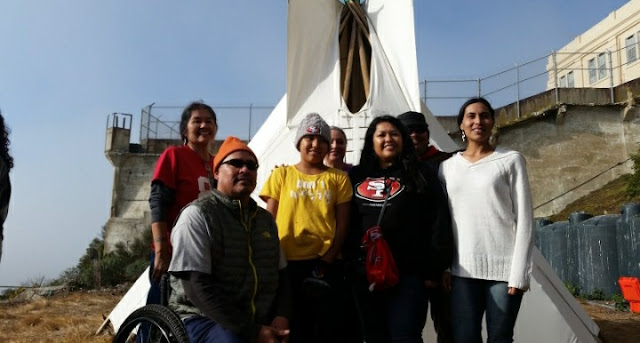 Article copyright Brenda Norrell. May not be republished or used without permission.